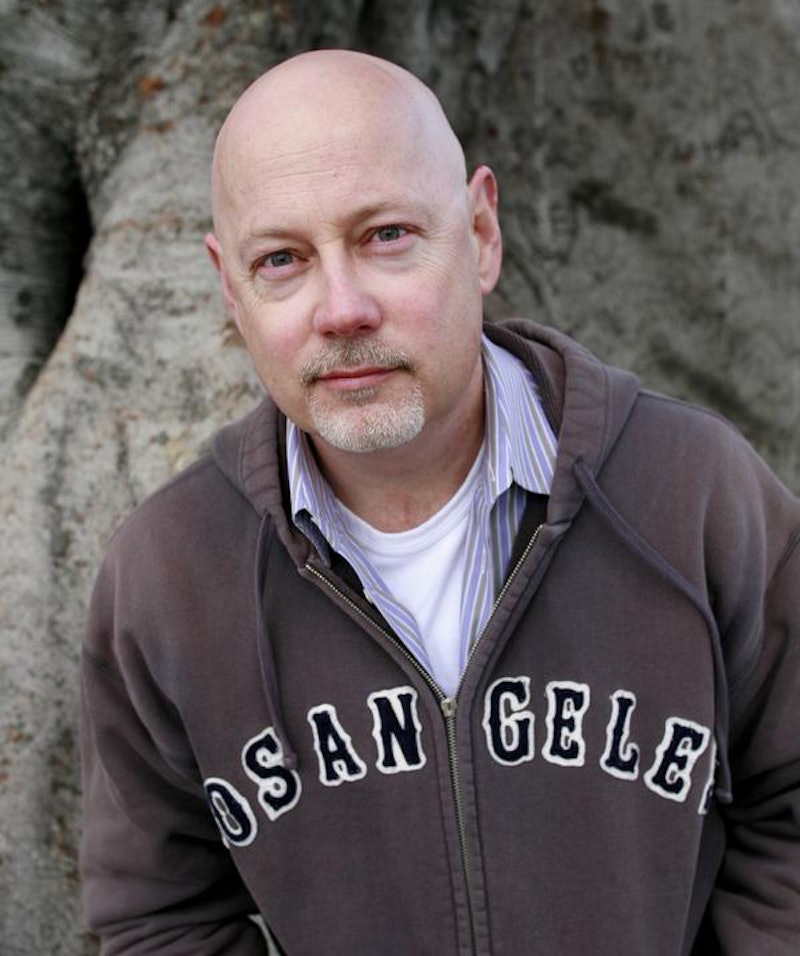 I was going to call Mark Haskell Smith's Raw: A Love Story (Grove) “Kafkaesque”, but according to Harriet, one of the novel’s protagonists:

[Kafka] was an overused cliché when things got weird. […] Circumstances conspire, misunderstandings emerge, and the next thing you know, people are dead and you’ve got a giant cockroach.

So maybe I won’t call it Kafkaesque (and there are no giant cockroaches), but, rest assured, things do get quite weird in Smith’s latest.

When Sepp Gregory, dating-show contestant and muscle-flexer extraordinare, writes a thinly-veiled autobiography of his time as a total studmuffin on reality TV, he draws the ire of Harriet, a rising star in the world of Internet literary criticism. She’s content lambasting Totally Reality on her blog — at least until she reads it, and realizes it’s good. Like, really good. Which is mostly due to Curtis, the uncredited ghostwriter living in (of course) Brooklyn. Harriet decides to go on a hunt for the ghostwriter of Sepp’s novel in order to expose him (and draw some attention to her blog, naturally). Unfortunately, she unknowingly runs into him at Sepp’s party at the Playboy Mansion… and makes out with him. And did I mention there’s a twist in there that makes Raw more surprising than any book I’ve read since before The Jersey Shore was on-air?

If that sounds just crazy enough to be real, it’s because Raw is a prime example of Poe’s Law in action. In case you’re unfamiliar, Poe’s Law is that, without an obvious statement of the author’s intent, it’s impossible to distinguish a parody of extremism from actual extremism. While reality TV isn’t exactly the same as an extremist ideology, it’s outlandish enough that parodies like Haskell Smith’s are just a little too close for comfort. After all, in an age of ever milestone of the Kardashian family’s life being broadcast, is it that hard to believe that “Sepp didn’t know why the book wasn’t the true story of his life, but it had something to do with the network owning his life rights or something, so the book was a novel, some made-up stuff that was like his story but not exactly his story.” Or, having watched way too many episodes of Chopped and Duck Dynasty, can we say for sure that neither the show Southern Roadkill Diner, nor the sushi roll it inspired (“venison smeared with marshmallow fluff”) actually exist? Raw mixes just enough real reality TV to make the fake stuff totally believable.

I, as an Internet Books Person, went into Raw assuming I would like Harriet the most, but count me among one of Sepp Gregory’s swooning fans. I can say this without ever actually seeing his “sun-stoned Beach Boy smile and ripped body.” Haskell Smith’s deft hand with both high- and low-brow culture makes Sepp a main character rather than a caricature. Sure, Haskell Smith’s clearly got his finger on the pulse of literary hipster-dom — he name-drops Bookslut , The Millions, Zadie Smith, Jhumpa Lahiri, and writes characters with Samuel Beckett quotes and ulna illustrations for tattoos. There’s even a pickle-brining roommate that could be straight out of a Simon Rich story. It’s clear the man has spent some time in Brooklyn, or has really done his research.

But Raw’s whole-hearted and non-judgmental embrace of reality that really makes it (and Sepp) shine. High-brow literary culture definitely doesn’t always get the higher ground here. For every dig at a “spectacle of flimflam masquerading as a novel written by a reality television actor” Raw throws down some realness about “Writers writing about writing and writers so that someone would notice and give them a book deal to write for other writers” and all book critics actually being aspiring authors (Am I guilty? Maybe).

And Sepp himself isn’t just a meathead Jersey shore juicer with a set of abs you can do laundry on. Fresh off of Love Express, the reality show where he got his heart broken for the second time in front of millions of viewers, Sepp is mid-breakdown, unable to get an erection, and struggling to come to grips with a life that isn’t filmed 24/7. When he quite unexpectedly starts getting naked (while sobbing) during a stop on his book tour, rather than deride him, his fans “were touched by what happened, and were being protective and gentle around Sepp.”

Sepp is kind, in a way none of the other characters (reality contestants or not) are in Raw. After watching his ex-girlfriend humiliate Harriet, he muses that “It just wasn’t his nature. Sure, he liked being famous, […] It was the fake stuff he couldn’t do. Acting like a douchebag so people would treat him like a star seemed, like, totally douche.” Eloquent? No. Heartfelt? Yes. Sepp might start out as, according to Harriet, a “slab o’ abs”, but he’s a character you can’t help feeling like you should introduce to your mom.

Raw, in the same vein as The Love Song of Johnny Valentine, gives us a sneak-peek into the world of modern “stardom” after the cameras stop rolling — it’s like an extra-juicy, totally uncensored reunion special — that also makes you wonder about what’s going on beneath the professionally-applied makeup of the contestants, and whether or not reality is stranger than reality TV. I’m not saying that you have to consider the feelings of every cast member on A Shot At Love (remember that one?), but a book like Raw makes it a fun (and funny!) proposition.

More like this
Netflix Shut Down 'Bridgerton' S3 Rumours About A “Very Dark” Storyline
By Bustle
Michael B. Jordan Tackled His "Public Breakup" With Lori Harvey On 'SNL'
By Brad Witter
Daryl McCormack Has A Very Special Lady In His Life
By El Hunt
4 Zodiac Signs That Will Take Forever To Admit They Like You
By Kristine Fellizar
Get Even More From Bustle — Sign Up For The Newsletter
From hair trends to relationship advice, our daily newsletter has everything you need to sound like a person who’s on TikTok, even if you aren’t.