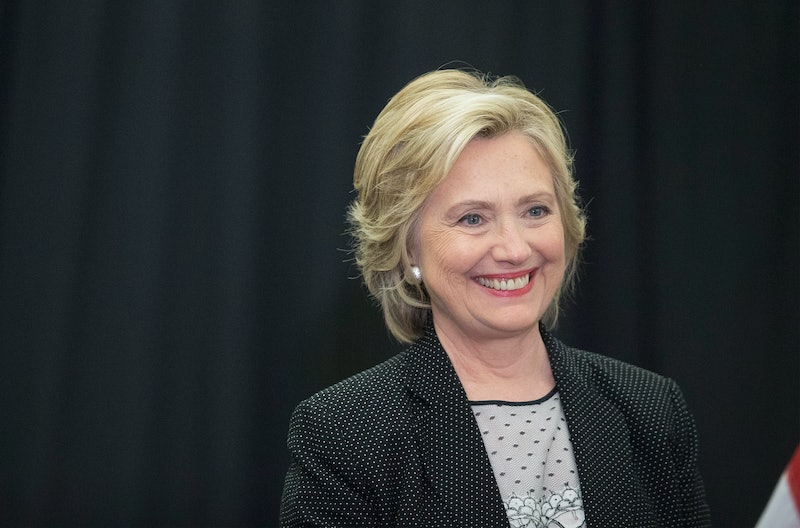 While there are admittedly a lot more important things going on, one of the best things about the Hillary Clinton email dumps are the subject lines, which vary from very serious to incredibly vague. Ever since a federal judge ordered the former Secretary of State to release her former State Department emails in monthly batches, more and more information about the current presidential hopeful has been released.

So far there are no smoking guns about Benghazi, but there have been a lot of references to broken fax machines and Clinton's beverage of choice (iced tea). The most recent batch, which contained almost 4,000 new emails, has put the State Department on track to release all 55,000 pages by January.

For the most part, the majority of the emails contain somewhat dull work information, questions about scheduling, and short reminders. A staggering amount have long subject lines referencing foreign countries or world leaders. Among the thousands of boring work documents, a handful of subject lines truly stand out. This batch didn't have any wonderfully vague references to "gefilte fish" that the last batch did, but it had its own fair share of cryptic and hilarious subject lines as well. Viral Internet sites should really take a lesson from Clinton's staffers on how to craft a hysterical and clickable headline. To save you the hassle of going through thousands of pages, we've ranked them here for you.

This was a forward of an article complimenting Clinton's "feminine" outfit. Not exactly what you expect to find in the Secretary of State's inbox.

One thing that the email dump has showed us: People love to write Clinton very nice letters. Such as this one, that talks about angels.

And here we have another exhibit of Clinton not being totally sure how technology works.

Did I mention people really enjoy sending her fan mail?

Not a rundown of what Clinton and her staffers want for dinner, but rather a very intelligent crash course on refugees and their dinner habits.

Come on Jake, that really wasn't that random of a question.

That is actually an excellent fact of the day.

13. Could you pls come and clear the table w a cart for the leftovers to be taken away?

It's worth noting that there is no body text. Clinton is a big fan of unnecessarily long subject lines, it appears.

12. Re: Since I have to drive what is best route on a Friday night in the summer?

Why ask GPS when you can ask an aide?

11. Oscar said that he found your files

I wonder if it's the same yellow folder that we learned she lost last month.

10. FW: Do You Suffer From Decision Fatigue? (worth a read)

This is actually an article about Israeli prisoners, but it reads like a BuzzFeed quiz.

What's with all these emails promising food information and not at all delivering?

8. HELP-- we are now waiting for at least an hour to take off--and maybe longer

This is an absolute crisis.

And no, it's not iOS 9... she's talking about actual apples.

Apparently someone on Clinton's staff has a bit of a need for speed. Unfortunately, it turned out that this seems to be attempts by Russian hackers to gain access to Clinton's computer — not as funny.

The most frustrating part of this email is that we never find out what the exclamation is about. Why does Huma think it's nice?!? The people need to know.

4. FW: What should the White House do? Panic!

This is how I will format all of my emails from now on.

Clinton's confusion is almost as wonderful as the mental image of her dressed as Robin Hood.

I feel it's noteworthy to point out how much Clinton and her staffers discussed this masked robber. This email is longer than about 90 percent of her other correspondence, just saying.

But why were you homicidal to begin with? What happened? Who were you going to kill? I have so many questions.

These emails are leaving the American people with more questions than answers, as we learn more about Clinton. Why does she feel the need to write very long subject lines? Who does she want to kill? And did she ever try to pay that fake parking ticket? We may never know.