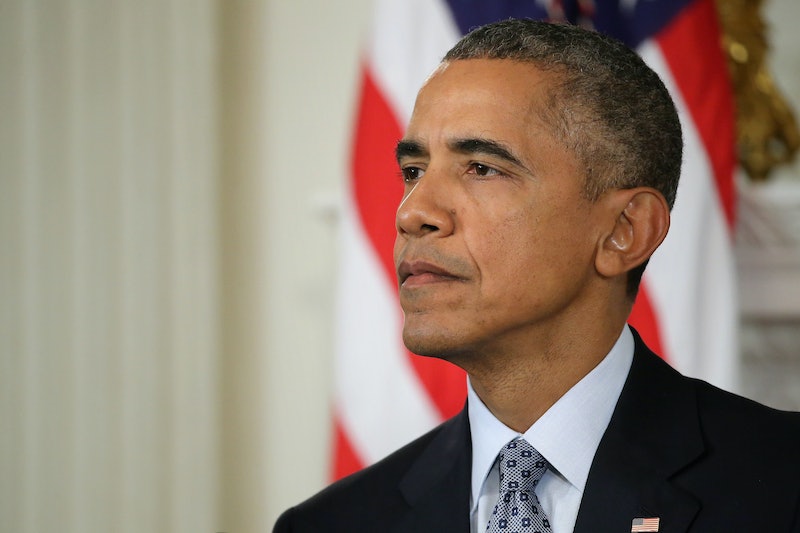 In a tragic turn of events this week, the Umpqua Community College in Roseburg, Ore., was overtaken by a lone gunman who shot and killed as many as nine students and professors, injuring another seven before he was finally gunned down by police. When all was said and done, families had been broken and questions had arisen over just how many mass shootings it would take before the government and the public came together to enact comprehensive safety measures. On Thursday evening, President Obama delivered a powerful response to the shooting in a news conference, lamenting angrily that those suggesting the issue shouldn’t be politicized were holding the country back from real change.

“Tonight, as those of us who are lucky enough to hug our kids a little closer are thinking about the families who aren’t so fortunate, I’d ask the American people to think about how they can get our government to change these laws, and to save these lives and let these people grow up,” Obama said. “And I would particularly ask America’s gun owners who are using those guns properly, safely, to hunt for sport, for protecting their families, to think about whether your views are being properly represented by the organization that suggests it is speaking for you.”

Somehow this has become routine. We are the only civilized country on earth that sees these kinds of mass shootings every few months. This is a political choice we make -- to allow this to happen every few months in America. We collectively are answerable to those families who lose their loved ones because of our inaction.

The president’s comments immediately elicited backlash from Republicans, many of whom complained that gun-free zones and strict gun laws were instead to blame. “A good leader waits and takes in the facts bit by bit before making any proclamations,” former Florida Rep. Allen West complained in a blog post on Friday. “This is not about new ‘gun safety’ laws … guns have a safety mechanism on them….”

Obama’s comments were supported in large part by Democrats, many of whom pushed for new legislation immediately in the aftermath of Thursday’s shooting. On Friday, Democratic Senators Richard Blumenthal and Chris Murphy, both of Connecticut, announced that they would be introducing a new measure forcing firearms dealers to complete background checks prior to selling a gun to a customer.

“These commonsense measures closing loopholes can make a difference as a matter of life and death,” said Blumenthal in a statement.

It’s not the first time the president has displayed heavy emotion while delivering statements in the aftermath of a tragedy: Over the course of his two presidential terms, Obama has delivered 15 separate statements following mass shootings across the United States, several of which were significantly moving.

The president's comments following a mass shooting carried out by U.S. Army Maj. Nidal Malik Hasan at Fort Hood, Texas, in 2009 (which took the lives of some 13 service members) were the first in what would eventually become an exhausting trend of emotional addresses.

"This is a time of war, yet these Americans did not die on a foreign field of battle, they were killed here, on American soil, in the heart of this great state and the heart of this great American community," said Obama during a memorial service the following week, highlighting the underlying tragedy of the service members' deaths. "This is the fact that makes [the incident] even more painful, even more incomprehensible."

Following a mass shooting at a constituents meeting in downtown Tuscon, Obama addressed a crowd of shaken supporters at the University of Arizona in 2011, urging Americans to take time to consider how such a tragedy might be prevented going forward. After consoling the family of Rep. Gabrielle Giffords, who had been speaking with supporters in the supermarket parking lot the day of the shooting and had been critically wounded, the president remarked stoically,

The truth is none of us can know exactly what triggered this vicious attack. None of us can know with any certainty what might have stopped these shots from being fired, or what thoughts lurked in the inner recesses of a violent man’s mind. Yes, we have to examine all the facts behind this tragedy. We cannot and will not be passive in the face of such violence. We should be willing to challenge old assumptions in order to lessen the prospects of such violence in the future. But what we cannot do is use this tragedy as one more occasion to turn on each other. That we cannot do.

In 2012, after a lone gunman stormed a midnight screening of the movie The Dark Knight Rises in Aurora, Colo., taking the lives of 12 and injuring another 70, Obama stood before a crowd in Fort Meyers, Fla., and empathized with the parents of the youngest victims:

I’m sure that many of you who are parents here had the same reaction that I did when I heard this news. My daughters go to the movies. What if Malia and Sasha had been at the theater, as so many of our kids do every day? Michelle and I will be fortunate enough to hug our girls a little tighter tonight, and I’m sure you will do the same with your children. But for those parents who may not be so lucky, we have to embrace them and let them know we will be there for them as a nation.

In the wake of a second mass shooting at an elementary school in Newton, Conn., just months later, which claimed the lives of 20 children and six staff members, Obama's weekly remarks were deeply poignant and undeniably stirring. Tearing up at the podium, Obama told reporters in a news conference,

Our hearts are broken for the parents of the survivors as well, for as blessed as they are to have their children home tonight, they know that their children’s innocence has been torn away from them too early, and there are no words that will ease their pain.

As a country, we have been through this too many times. Whether it’s an elementary school in Newtown, or a shopping mall in Oregon, or a temple in Wisconsin, or a movie theater in Aurora, or a street corner in Chicago -- these neighborhoods are our neighborhoods, and these children are our children. And we're going to have to come together and take meaningful action to prevent more tragedies like this, regardless of the politics.

Showing clear frustration in the aftermath of a deadly shooting at Seattle Pacific University in 2014, during which a lone gunman opened fire on students walking across campus, injuring three and killing one, a visibly frustrated Obama told students gathered at a White House Tumblr Q&A,

My biggest frustration so far is the fact that this society has not been willing to take some basic steps to keep guns out of the hands of people who can do just unbelievable damage. We’re the only developed country on Earth where this happens. ... And I will tell you, I have been in Washington for a while now and most things don’t surprise me. The fact that 20 six-year-olds were gunned down in the most violent fashion possible [at Sandy Hook Elementary] and this town couldn’t do anything about it was stunning to me. And so the question then becomes what can we do about it. The only thing that is going to change is public opinion. If public opinion does not demand change in Congress, it will not change.

Following a heartbreaking mass shooting at a historic black church in South Carolina this past June, President Obama addressed reporters in a news conference, lamenting the fact that yet another nine victims had been lost to senseless gun violence. Speaking to the crowd of journalists, a noticeably emotional Obama said,

But let’s be clear: At some point, we as a country will have to reckon with the fact that this type of mass violence does not happen in other advanced countries. It doesn’t happen in other places with this kind of frequency. And it is in our power to do something about it.

On Friday, in his usual news briefing with White House reporters, Obama once more remarked on the inevitability of more mass shootings, saying that as long as the public and Congress continued to ignore the statistics backing gun violence, tragedies like the one at Umpqua Community College would continue.

"There is no showing that somehow that we are inherently more violent than any other advanced nation … There’s no sense that there is something in the American people that is more violent," he explained angrily. "It's not that the behavior or the impulses are necessarily different as much as it is that they have access to more powerful weapons."