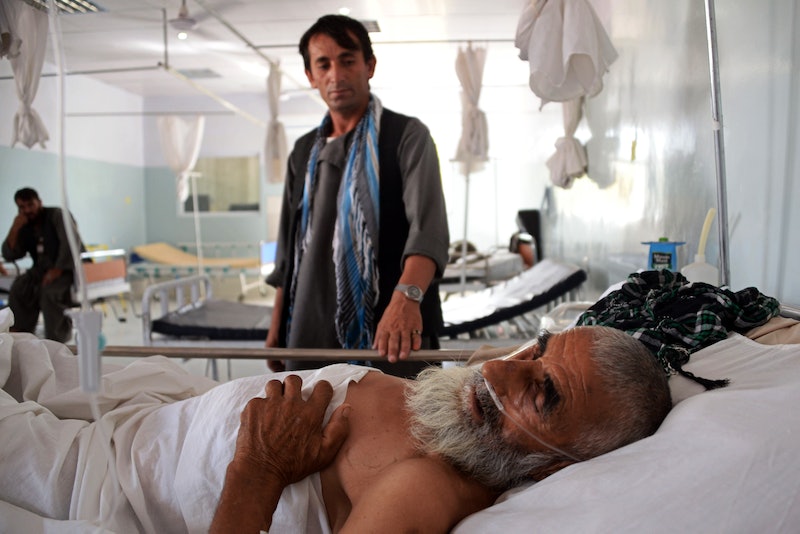 Military officials reported Saturday that a U.S. led airstrike had left several dozen staff and patients at a hospital in Kunduz, Afghanistan dead or gravely injured. Among the fatalities were at least nine Médecins Sans Frontières (Doctors Without Borders) staff members and a rising number of others. An international coalition led by the United States has been conducting aggressive airstrikes in Kunduz region since Tuesday, in an attempt to take back the city from Taliban forces, which overran Kunduz on Monday.

"[The Taliban attacked Kunduz] for publicity purposes," an anonymous U.S. military official told The Washington Post on Tuesday. The official added that Afghan forces would likely be able to "dislodge" Taliban fighters "within weeks," saying, "They did what they had to do, and they’re going to take a beating [getting] out of there."

According to a report by The Guardian, Taliban insurgents had been targeting supply lines and military convoys.

"From this morning, the Taliban have been setting up checkpoints in and around the city, looking for the government employees," one resident told the paper in a phone interview on Tuesday. "Yesterday it was possible for people to get out of the city, but today it is too late because all roads are under the Taliban control."

By Saturday, however, military officials claimed that those same Taliban fighters had been knocked back. In a news conference Saturday, Afghanistan Interior Ministry spokesman Sediq Sediqi told reporters that the 10 to 15 of the suspected insurgents who had allegedly been hiding in the hospital had been killed. He said, however, they had "also lost doctors."

MSF president Meinie Nicolai condemned the airstrikes, saying that they were "abhorrent and a grave violation of International Humanitarian Law." She added that the dismissal of human casualties by military and regional officials was reckless.

"We demand total transparency from Coalition forces," said Nicolai in a statement. "We cannot accept that this horrific loss of life will simply be dismissed as ‘collateral damage.'"

An AFP report pointed out this week, the Taliban's Kunduz insurgency had been the militant group's "biggest tactical success" since 2001. Consequently, the group's stumble following Saturday's bombing was considered by many to be an important moment.

U.S. led airstrikes in the region have been occurring intermittently for the past few years, causing the global community to criticize former Afghan President Hamid Karzai for allowing the bombings on his own people to continue unabated. Since Afghan President Ashraf Ghani took office last year, those same airstrikes against the Taliban have persisted, but as The New York Times reports, military leaders have shifted targets to smaller clusters, sparing Ghani the same criticism waged against his predecessor.

The most recent Taliban attacks on Kunduz have been seen by some in Washington as a sign of greater need for increased troop movement in the region, despite President Obama's earlier call to withdraw forces from the region.

"What is surprising is the location of this attack, in the north, which is generally not the area of most of the Taliban activity," said Arizona Sen. John McCain in an interview with The Wall Street Journal earlier this week. "So it is an indicator of the dimensions of the Taliban’s capability to launch a very significant and successful insurgency."

On Saturday, MSF President Nicolai said that the most recent round of airstrikes, however successful in driving out insurgents, had caused unspeakable damage and should be investigated.

"Besides resulting in the deaths of our colleagues and patients, this attack has cut off access to urgent trauma care for the population in Kunduz at a time when its services are most needed," she said in a statement. "Once again, we call on all warring parties to respect civilians, health facilities, and medical staff, according to International Humanitarian Law."