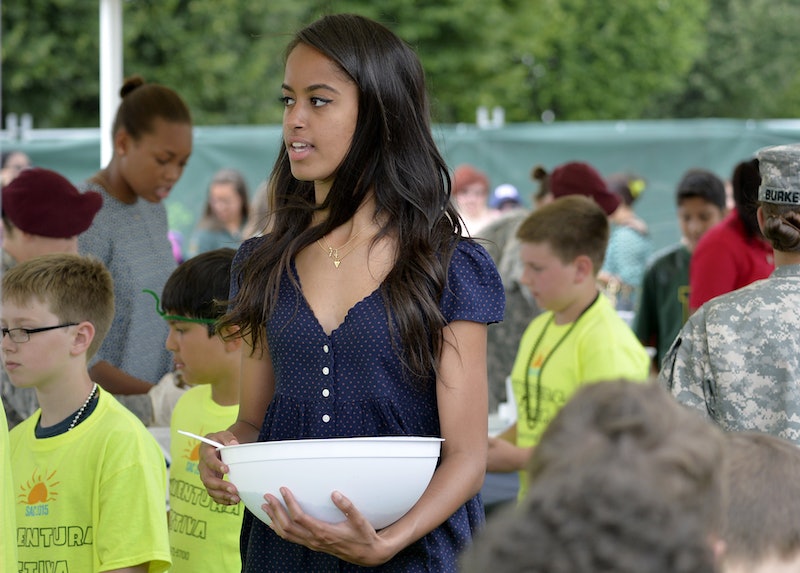 First daughter Malia Obama has started her own race to the top: Malia has reportedly visited more than 10 prestigious colleges and universities in the past months as college admission season revs up. While her parents' connections to Princeton, Columbia and Harvard may influence her decision, is there anything she could learn from past "first children" and their college decisions? Being a legacy may have its advantages but these schools have handled the fame surrounding president's kids before.

The New York Times reported Sunday that Malia has visited six Ivy League schools, Stanford, UC Berkeley, NYU and a few smaller liberal arts colleges. Leaving dad and even sometimes mom at home, she has taken low-key tours with family friends and classmates from her private D.C. high school. Colleges have organized tours with the best-connected and perhaps best-looking tour guides to try and woo her.

Between the help on essays from her college counselor, an internship on the set of Girls and extracurriculars that include volunteering with the First Lady, Malia should have her pick of top schools. President Obama, though, has warned her not to "stress on getting into one particular college." With that in mind, perhaps the paths of Clintons, Bushes and Kennedys of years past can give her some guidance.

The Bush Twins might have been most famous for getting busted for drinking under age, but the sisters took separate but quiet paths during their college years. Barbara Pierce Bush, the older twin, attended Yale University in New Haven, Connecticut. The fourth-generation Bush to attend the school, she majored in humanities and lived in the same residential college as her father. Friends remained tight-lipped about her time on campus.

Jenna Bush, now Jenna Bush Hager, studied English at the University of Texas at Austin, following in her mother's footsteps. First Lady Laura Bush got a master's in library science at UT. Jenna was often seen jogging around Austin with Secret Service in tow. After school, Barbara went on to found a public health non-profit and Jenna is a correspondent for NBC's Today Show.

Chelsea Clinton has degrees from Oxford and Columbia too, but her post-secondary education began at Stanford University in Palo Alto, California — on the opposite coast of her parents' alma maters, Wellesley and Georgetown. Move-in day was a public event. President Bill Clinton and then First Lady Hillary Clinton accompanied their daughter to her dorm with a full motorcade, complete with Secret Service guards and curious journalists. Bill supposedly carried in boxes for her. Once she settled in, life became a lot more normal. The campus newspaper declared her off limits, the press left her alone and she went on to major in history. After school, she continued her studies; she has masters degrees in international relations and public health. She has worked in journalism, politics, consulting and is now a major player at the Clinton Foundation.

The next few administrations can't help Malia much. George H.W. Bush's children (including George W. and Jeb) were all adults and out of school when he entered the White House. The same was true for Ronald Reagan's four children from two marriages. His youngest son, liberal talk radio host and political commentator Ron Reagan, had dropped out of Yale to become a ballet dancer with the Joffrey Ballet a whole five years before Reagan entered the White House.

Amy was the only Carter kid to live in the White House. She was nine when her dad won the presidency and the family moved into 1600 Pennsylvania Ave. She famously had a cat named, Misty Malarky Ying Yang, roller-skated in the East Room and had slumber parties in a treehouse on the South Lawn. After her time at the White House, Carter attended Brown University, but not for long. She was arrested several times for her work as a political activist. During her sophomore year, at age 19, while protesting CIA assassinations and murders in Central America, she was arrested for trespassing and disorderly conduct.

She was later acquitted but Brown suspended her, and Amy didn't return. She went on to get a bachelors of fine arts from Memphis Art College and a masters in art history from Tulane. Since getting married in 1996, she has kept out of the spotlight but she is a board member of the Carter Center, the human rights and diplomacy center started by her father.

Susan Ford moved into the White House abruptly after Nixon resigned and her father Gerald Ford became president. A high school senior at the time, Susan held her high school's prom (for the entire class of 1975) in the East Room of the White House. She started school at Mount Vernon College for Women, now part of Georgetown but then transferred to the University of Kansas. However, she dropped out during her first semester.

She went on to become a photojournalist for publications like Newsweek and Ladies Home Journal. She is also an author and has worked on the board of the Betty Ford Center for alcohol and drug abuse.

Both of Nixon's daughters had graduated or married by the time he became president, which brings us to Luci Baines Johnson. She also moved into the White House abruptly, after President John F. Kennedy was assassinated. She found out during high school Spanish class. After graduation (seen above) she went on to Georgetown University School of Nursing but dropped out in 1966 when she married her first husband (the school did not allow married women to attend). Later in life, she received a bachelor's in communications from St. Edward's University. She now runs the business that manages the Johnson family's assets and business interests.

The first family most marked by tragedy remains the Kennedys. Caroline was three years old when her father was sworn in as president and John, Jr., was born two weeks later. They were six and three when their father was assassinated. The children soon moved with their mother to New York City to escape media attention in Washington, D.C. They attended elementary school in the city but both finished prep school in Massachusetts. Caroline went to undergrad at Radcliffe College, the former women's college at Harvard. John studied history at Brown University. Both later went to law school, Caroline at Columbia and John at NYU. John died in a plane crash in 1999. Caroline Kennedy currently serves as the ambassador to Japan.

First children in recent years have been some of the best and brightest, but if you're keen to drop out of school to become an activist or photographer, Malia, you won't be the first.