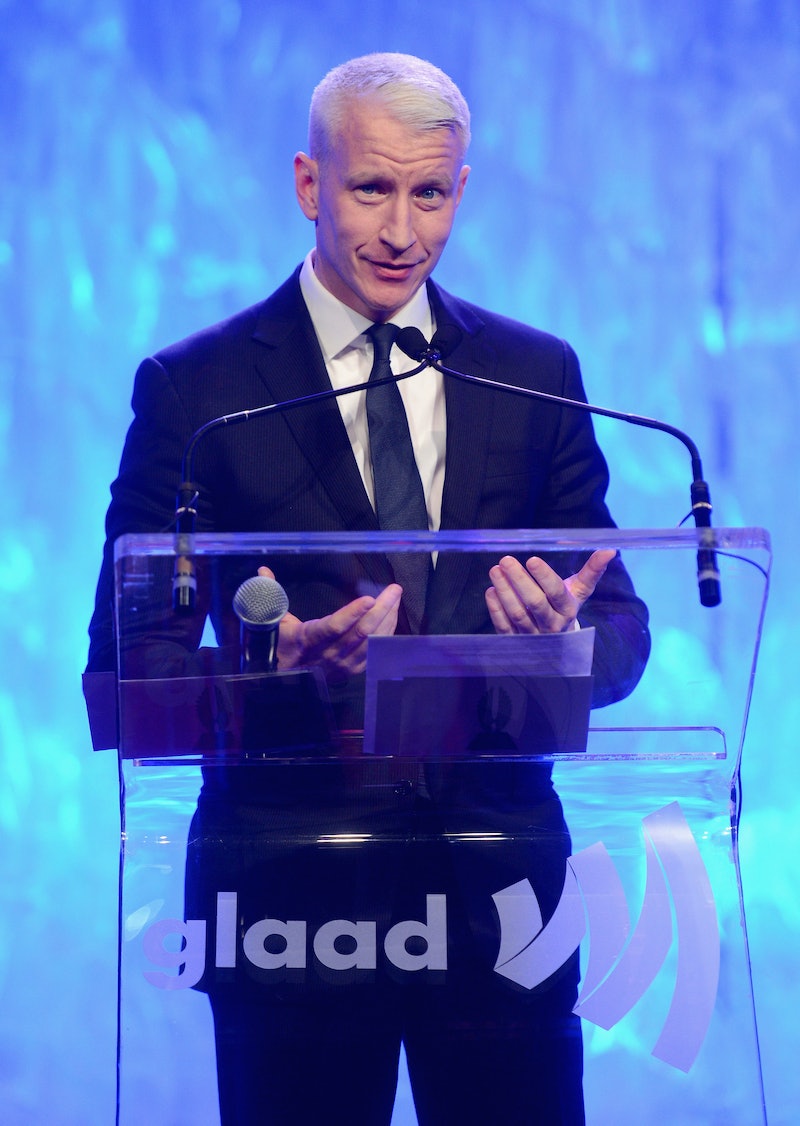 Just in time for National Coming Out Day, Apple CEO Tim Cook took to the stage at a recent award ceremony to explain exactly why he, too, made the brave decision just over a year ago. In his acceptance speech for the Human Rights Campaign Visibility Award in Washington, D.C. on Monday, Tim Cook said he chose to come out publicly in order to inspire those who weren’t prepared yet to do the same. Cook added that he wanted to give a voice to those who had been shunned for their sexual orientation, in the hopes that it would prove being gay was not “a limitation.” The (actual) Apple genius isn't the only LGBTQ public figure whose story is particularly inspiring, either — over the years, several notable faces have stepped forward to fight for the cause by coming out in the public eye.

Cook, who first came out in a 2014 op-ed essay for Bloomberg at the end of October last year, admitted that as a relatively private person, the decision hadn’t been an easy one. “I’m a private person by nature, [and] growing up I was taught that you distinguish yourself in life by what you do, not by what you say or by how loudly you say it,” Cook said Sunday. “But sometimes you just have to be loud.”

Cook’s comments were wildly familiar for anyone with an eye keen on contemporary LGBTQ issues — over the past few years, a slew of high-profile figures have begun to speak out on the issues of gay marriage, gender identity, and everything in between, in the hopes that people young and old might join in.

CNN anchor and longtime journalist Anderson Cooper first came out publicly in an email to former Daily Beast contributor and The Dish founder Andrew Sullivan in July 2012 — and although Cooper maintained that his sexual orientation had never been a secret, his coming-out made some serious waves. In his email, Cooper wrote,

There continue to be far too many incidences of bullying of young people, as well as discrimination and violence against people of all ages, based on their sexual orientation, and I believe there is value in making clear where I stand. The fact is, I’m gay, always have been, always will be, and I couldn’t be any more happy, comfortable with myself, and proud.

In response, GLAAD president Herndon Graddick issued a statement applauding Cooper for being a positive role model to the millions of young people still too nervous to come out themselves. “Even prior to coming out publically, Anderson's terrific work has raised awareness of inequalities facing LGBT people,” Graddick wrote. “He's a role model to millions and now will inspire countless others.”

The MSNBC anchor has been open about being a lesbian for some time, but it was the manner in which the then-Stanford student bravely came out that was particularly inspiring.

In an interview with the campus newspaper, 17-year-old Maddow said that she posted an honest, heartfelt letter stating that she was a lesbian in one of her dorm’s bathroom stalls. Despite her fears that others wouldn’t be accepting, Maddow said that coming out actually “solidified” friendships with both male and female students, after shutting herself off from making friends previously. “[Coming out was a] very political, non-assimilationist statement,” a young Maddow told the paper, adding that she wished those who harbored negative feelings about the LGBTQ community would speak out, so that she could address the issues head on. “Nobody’s allowed to say homophobic [things], and so [that sort of attitude] goes unchecked.”

At 42, with several successful television and radio shows, as well as a GLAAD Excellence in Journalism Award to her name, it’s safe to say she’s established herself as a positive, active voice for the LGBTQ community.

CNN anchor Don Lemon first came out publicly as gay in May 2011, the same time his book, Transparent, was hitting shelves at bookstores across the nation. Wanting to get ahead of the book's release, in which he discussed his sexual orientation openly for the first time, Lemon sat down with The New York Times for an interview.

"I'm talking about something that people might shun me for, ostracize me for," said Lemon, who admitted he was scared. "I think if you’re going to be in the business of news, and telling people the truth, of trying to shed light in dark places, then you’ve got to be honest [and] you’ve got to have the same rules for yourself as you do for everyone else." He added that, if he had seen more people who were out and proud growing up, he likely wouldn't have waited as long to come out himself.

As U.S. Chief Technology Officer, Megan Smith is charged with advising the president and his staff on issues like net neutrality and privacy, as well as overseeing teams of tech professionals who repair, update, and manage the day to day functions of websites like HealthCare.gov. It's an enormous responsibility and one of which Smith, who was appointed in early 2015, has already proved herself more than worthy. However, Smith's own personal story has also served as something of an inspiration different reasons entirely.

Formerly the CEO of PlanetOut, the MIT-trained mechanical engineer helped with the founding of the LGBT media company which was later able to acquisition such magazines as The Advocate, Out Magazine, HIV Plus, and the LGBT publishing house Alyson Books. And although the company went defunct in 2009, Smith's PlanetOut era served as an important stepping stone in her overall rise to success and, eventually, Washington. Now a leading voice in the nation's capital, Smith, who was formerly general manager of Google's philanthropic wing, has said she wants to focus on giving other minority groups a chance in Washington, too.

"How do we scrub everyone into the future of our country?" she asked, in an interview with Wired this past April, indicating that she would be working with community colleges and companies to enact further diversity training.

Wisconsin Sen. Tammy Baldwin didn't just win a coveted seat when she joined Congress in 2012, she also became the first openly gay politician (and first Wisconsin woman) to be elected to the U.S. Senate in the history of the country. It was a momentous occasion. But Baldwin told CNN that month that she hadn't run to make history, just to change things in Washington for the better.

"Having a seat at the table matters, and I think we will see a Senate that is more reflective of America," said Baldwin in an interview with the news outlet. "We're certainly not there yet, but this will be a change that moves us forward." She explained that with her appointment (and hopefully more like it in the near future), Congress was finally beginning to represent the many unique voices of the American landscape.

"This is a big day for gay women in America, and really, for all communities who aren't the typical straight, white, wealthy men elected to Congress," Baldwin added.

ACLU Executive Director Anthony Romero has long been an advocate of the LGBTQ community, but his reach has extended far beyond that: Since first being appointed director in 2001, only a few days prior to the tragic 9/11 attacks, Romero has led the charge against issues such as racial profiling, reproductive health patents, and the Patriot Act, all while doubling the ACLU staff and pushing legislation that would protect LGBT employees and workers from discrimination.

"While there remains much work still to do to achieve the goal of full civil rights protections for LGBT people, we must take time to celebrate the landmarks along the way," he said in a statement following President Obama's signing of the Employment Non-Discrimination Act (ENDA), in 2014.

Margaret Cho has been making audiences laugh for years, but it wasn't until more recently that she took on the unofficial mantle of "spokesperson." Cho, who identifies as bisexual, has been an outspoken proponent of LGBTQ rights since her early days as a stand-up comic, but in an interview with Out Magazine last year, she lamented that bisexuals are often criticized for being largely "uncategorizable." Cho explained,

It's so rare for people to come out as bisexual since you’re claiming yourself as everything.... To find love is always hard. For bisexuals, it’s doubly hard. People say it opens up so many horizons and avenues for you to go down, but it also makes everybody a threat.

In an op-ed column for the Huffington Post in 2011, Cho pondered why the concept of bisexuality was so hard for many to understand. "Most of the people I know have had sex with more than one person, and many have sex outside marriage," she said. "I just happen to have had it with people all along the gender scale."

You didn’t really think I’d make a list of positive LGBTQ figures and not include Ellen, did you? The popular daytime talk-show host was one of the biggest high-profile names to come out as a lesbian in the mainstream media during the ’90s, and despite worries that the revelation might affect her acting career (at the time, DeGeneres was starring in her own ABC sitcom, Ellen), the move paid off for both the comedian and the millions of citizens who adore her. In an interview with TIME magazine in 1997, DeGeneres decided to make the big leap.

Despite her initial reluctance at becoming an unofficial spokesperson for the LGBTQ community, 18 years later, DeGeneres has undoubtedly become one its biggest voices. A 2013 Pew poll showed that DeGeneres was considered to be the most visible LGBTQ individual in the United States, just ahead of actor Neil Patrick Harris, who came out as gay in 2006.

“Ellen DeGeneres is...almost a litmus test of where we have been as a society,” University of Wisconsin communications professor Dietram Scheufele told NPR in 2013. “When she first came out and really put the issue of same-sex partnerships on people's agendas, and I mean people who really wouldn't have thought about it, I think the country was still in a very different state.”

In his Human Rights Campaign acceptance speech on Sunday, Apple CEO Cook described the decision to come out as one motivated by a desire to be forthcoming, as well as a means by which he could extend a hand to others in the LGBTQ community — whether they were ready or still needed a little time. Cook added,

More like this
An Honest Review of MeUndies Boxers, According To A Non-Binary Person
By Megan Lasher
The 'Heartstopper' Cast Were Spotted Filming In A Major City
By Nola Ojomu and Sam Ramsden
There’s A Brand New Drag Race Spin-Off & It’s Dropping Very Soon
By Sam Ramsden
Mel B Speaks Out Against Domestic Violence In A Powerful Speech
By Sophie McEvoy
Get Even More From Bustle — Sign Up For The Newsletter