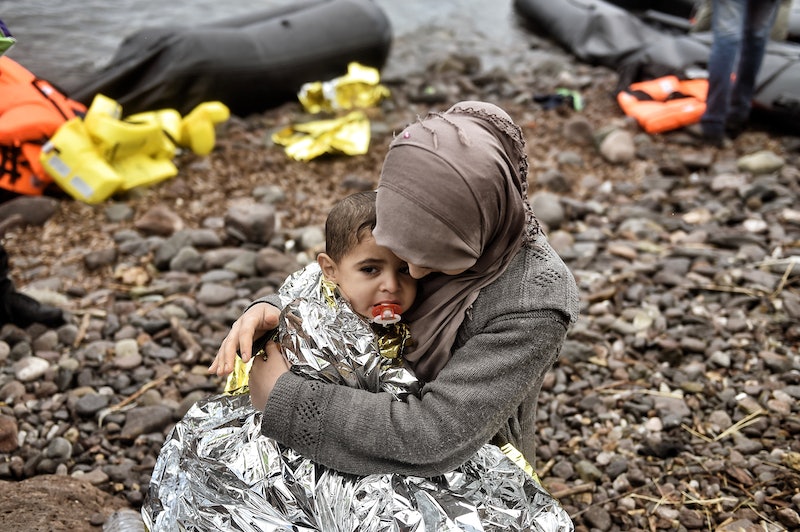 The crucial difference between refugees and migrants is that the former are often fleeing war or fear of persecution in their home countries. That's something that both the refugees from the Middle East and CARE are trying to get Europeans and many mainstream media outlets — which usually refer to refugees as "migrants" in news — to understand. To help hammer the point home, CARE, an organization that serves poor communities around the world, started asking "If you had to leave your home behind, what would you take?" CARE's #WhatWouldYouTake campaign makes it abundantly clear that refugees are making the difficult decision to start over with nothing.

CARE's website says that many of the one million Syrian refugees the organization has helped in Jordan, Lebanon, and Turkey fled their homes just as bombs and tanks were covering their streets. Many of the refugees fled so quickly that they only took one or two things with them on their way out the door. For many of them, that was medicine, family documents, or a child's toy. In an effort to help people understand that refugees aren't fleeing because they simply want better jobs, CARE is featuring refugees photos alongside quotes about what they brought with them when they fled their homes. The organization is using the #WhatWouldYouTake hashtag on Twitter to help users place themselves in a refugee's shoes.

Both CARE's interviews and the responses from people on Twitter come together to create an understanding and moving response to the crisis. The first refugee featured on CARE's website was Reneem, who said she took her brother's glove:

My mother knit this glove for my brother, Leith. He always wore it, in summer and winter. It's all I have from him. He was killed in the war. He was only 17.

Others took teddy bears for their children, high school certificates, or photos of loved ones who were killed in the conflict. The idea is eye-opening, but it isn't totally new. In March of this year, the BBC asked refugees what they took with them when they fled their homes. One took his trombone, while others took shoes, a whistle, and music. The BBC even created a quiz that allows users to understand what refugees' choices are like, and the kinds of dilemmas they face.

Twitter users came up with a number of responses that ranged from simplistic to practical to understanding.

A post on Medium by the International Rescue Committee had refugees answer the question "What's in my bag?" Aboessa, 20, packed medication and food for her young daughter, personal documents, sunscreen, and a cellphone charger:

Everything is for my daughter to protect her against sickness. When we arrived in Greece, a kind man gave me two jars of food. Another man gave us biscuits and water when he saw my baby.

Omran, who is six years old and fleeing Syria with his parents, brought only one spare shirt and one extra pair of pants, along with his favorite snacks, a syringe for emergencies, bandages, medication, soap, and a toothbrush and toothpaste. The lists go on like that — many refugees pack only essentials. Many of them don't even attempt to bring comforting pieces of their homes because they don't have room. In asking this one simple question, CARE and others show just how difficult refugees' decisions are and just why they need — and greatly deserve — help.