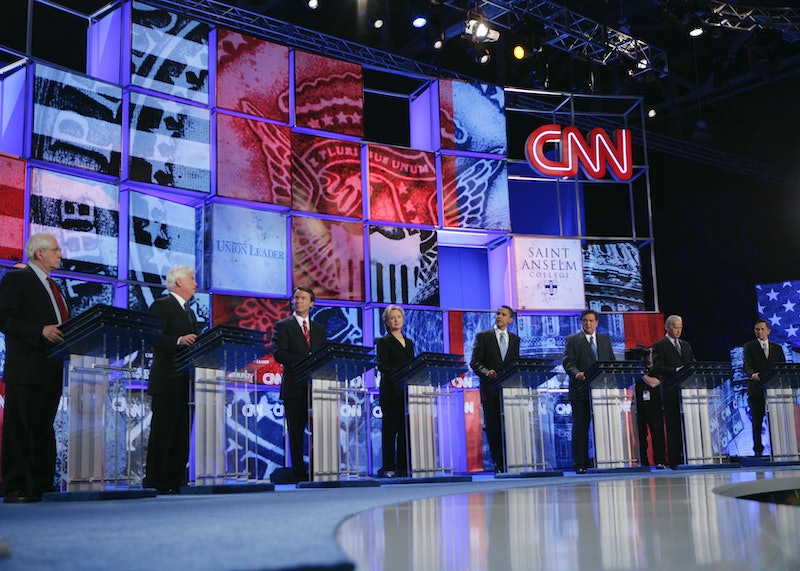 Those involved in the race for U.S. presidency can spend and earn a killing — and it's not just the candidates themselves. Major news networks like CNN and Fox News make a huge profit off of highly priced advertising spots in the years-long campaign for office. In the first August GOP debate, hosted by Fox, 24 million viewers tuned in to watch 17 hopefuls exchange soundbites on major issues. In the second GOP debate, aired on CNN, 22.9 million people watched, breaking records for the network. Millions more will watch the upcoming Democratic debate on Oct. 13, garnering even more revenue for CNN, the network that is sponsoring the event. So where does the money from the Democratic debate go?

The money, it seems, goes into the company's pocket. During the Sept. 16 Republican debate, CNN charged advertisers rates 40 times more than regular ad rates, according to Fortune. Some companies paid up to $200,000 for a 30-second commercial. Much like during the Super Bowl, the biggest companies bid for airtime to advertise their product while millions of viewers are tuned in. At CNN, advertising sales account for 50 percent of revenue each year, according to Adweek. The money generated from ad sales during the debate will go where the rest of its ad revenue goes: toward profit and paying company expenses, including paying employee salaries, producing programs, etc.

The candidates themselves do not receive money for their televised appearances. And no money is made off the actual audience members who attend presidential debates. Tickets to the Oct. 13 debate, and most of the other announced debates for that matter, are not available for purchase by the public. The hotel Wynn Las Vegas, host of the upcoming debate, said in a statement that guests received tickets by invitation only, and encouraged others to request tickets (if they become available to the public) by contacting the Nevada State Democratic Party.

After the last debate, Donald Trump made headlines when he suggested CNN donate profits from the debate to veterans' groups. He claims to be responsible for the record ratings at the last debate, writing "While I refuse to brag, and as you know very well, this tremendous increase in viewer interest and advertising is due 100% to 'Donald J. Trump.'" CNN did not comment on his call for a charitable donation, according to The Boston Globe.

Trump himself is accepting no campaign donations, and is self-funding his own campaign for presidency. So, from what I can tell, Trump thinks educating voters on the candidates' stances on timely issues should be a public service, not a for-profit business.

While I'm shocking myself by writing these words, I do agree with Trump in theory. However, news media corporations like CNN and Fox do and always have made a profit by televising live political events. With more people than ever tuning in to watch, and with a record number of candidates in the race, these media outlets will likely make more money than they have by televising previous debates. There is no reason why CNN would choose to donate money made from one of the most profitable events of the year. That is not how most successful companies operate under our capitalist market, nor is it a smart business move for CNN, Fox, or any other network.

The major networks who are hosting these debates are not just making a profit off of advertisers. While candidates cannot pay money directly to secure their participation in a debate, Jim Newell of Salon explains how Fox made a profit off some candidates themselves over the summer. The network issued a cap on the number of candidates allowed to join each debate based on that individual's poll ratings. Gov. Chris Christie spent $250,000 on advertising with Fox in order to boost his poll numbers, which eventually did allow him to participate in the debate against other top candidates. By imposing these caps, Newell writes, Fox got "not just constant appearances from the candidates themselves in their desperate quests for exposure, but now feedback in the form of actual money, too."

The upcoming Democratic debate features significantly fewer candidates than those of the Republican party, and Trump will not be participating. For these reasons, it seems unlikely that as many viewers will watch or that advertisers will pay such exorbitant fees. But with over 15 scheduled televised debates remaining, there will be plenty more opportunities for news networks to cut a profit.