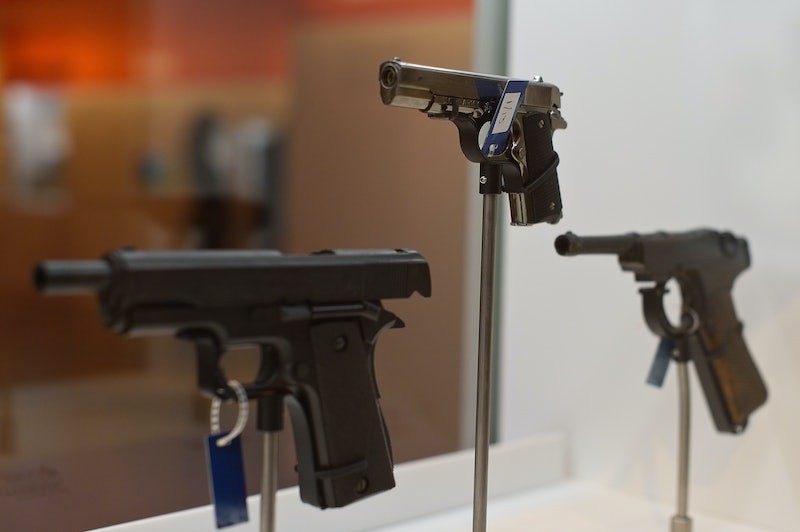 It seems like a paradox at first glance: When people die from guns in this country, more people go out to buy guns. Data repeatedly shows gun sales have risen after every mass shooting in recent years. Gun purchasers spent $4.1 billion in 2014 and sales are expected to rise to over $5 billion by 2020, according to CNBC. CNN reports gun stocks are up as much as 70 and 80 percent in 2015 for major companies Smith & Wesson and Sturm, Ruger & Co. This is nothing new. Sales for major gun companies rose to record numbers after the Sandy Hook Elementary shooting in 2012 and after the protests at Ferguson, Missouri. Why is this happening?

In a sentence, it is because the right to own guns under the Second Amendment has become a highly political issue. After shootings at Columbine, Sandy Hook, and Tuscon, pro-gun control politicians made calls for tighter restrictions on civilian gun purchases. In reaction, hoards of people bought guns because they feared these possible legislative restrictions.

The New York Times reported that after Obama announced his visit to Roseburg, Oregon, to meet with the families of the victims of this latest tragedy at Umpqua Community College, some local residents were less than thrilled. Some accused the president of capitalizing on their grief to push his own gun-control agenda. As David Jaques, publisher of a conservative newspaper in Roseburg, told Bill O'Reilly, "Our Douglas County commissioners, along with our Douglas County-elected sheriff, who is very popular, and our chief of police all came to a consensus language about him not being welcome here for political grandstanding."

This is consistent with the way mass shootings have been politicized in this country. Despite evidence that legal gun purchases caused more mass shootings than illegal ones, the gun lobby prevents any real progress, such as restricting the sale of highly dangerous automatic weapons, by sponsoring Congress members who support their interests.

Gun owners have lived in fear of Obama "taking away their guns" for years, and so far they have not lost them. Gun sales rose when President Obama was first elected in 2008, especially when the NRA warned gun lovers that his election would result in a sweeping ban on guns. During the 2008 election, the organization circulated fliers that misleadingly alerted readers to "Barack Obama's 10-Point Plan to 'Change' the Second Amendment." Repeatedly, the president has clarified his fairly moderate position on gun ownership. He wants to restrict access to assault weapons, which he has said exist only "to kill people."

Given the NRA's infamously powerful lobby in Washington, D.C., it is likely that the debate over guns will continue to be a major political issue as the 2016 election season approaches. Hillary Clinton has vowed to tighten civilian access to guns through executive order if necessary. In Florida on Friday, Clinton asked "What is wrong with us that we can't stand up to the NRA and the gun lobby and the gun manufacturers?" Directly after her statement, guns shares rose slightly over the weekend, as CBS News shows. When anti-gun politicians publicly decry the existing accessibility of guns, sales rise. It seems almost a lose-lose situation: Politicians can't talk about passing gun control laws without accidentally encouraging people to buy guns.

Will we ever be released from this vicious cycle? Time will tell. But a largely pro-gun Congress does not seem to be interested in restricting access to guns to save lives. Despite the fears of gun lovers, the Second Amendment will not be reversed any time soon. And every time it is challenged, people flock to buy guns. It just might take a drastic action like Clinton's proposed executive order to prevent another tragedy like last week's in Oregon.