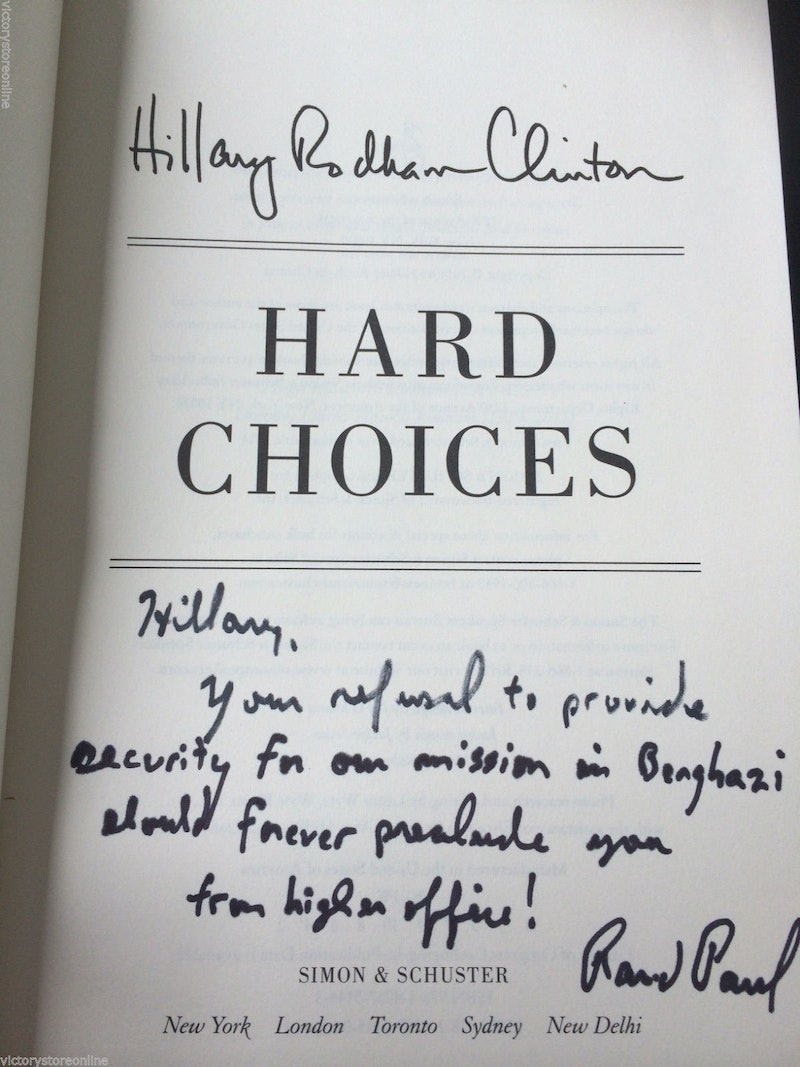 Hillary Clinton's memoir is the gift that keeps on giving, in more ways than one apparently. This week, the Democratic candidate sent copies of her best-selling book to every GOP candidate (well, except Jim Gilmore, for some reason) in response to accusations that she hadn't accomplished anything significant as secretary of state. And the snarkiness continued Wednesday, after Rand Paul decided to auction Clinton's Hard Choices on eBay — but not before putting in his own mark to really make it a collector's item.

The tit-for-tat began when Clinton sent out copies of her 596-page book with a letter that said:

From working to restore America's standing in the world to bringing crippling sanctions to Iran to negotiating a ceasefire in Gaza, please enjoy all 596 pages of my time as secretary of state. With 15 candidates in the race, you've got enough people for a book club!

Texas Sen. Ted Cruz offered to return the favor by sending his own book to Clinton, while Louisiana Gov. Bobby Jindal said he'd read it if she watched the controversial Planned Parenthood videos. But Paul took the unique route of signing his copy with his own name, writing a dig at Clinton, and then putting it for sale online. On the title sheet, he wrote:

Your refusal to provide security for our mission in Benghazi should preclude you from higher office!

The eBay posting says, "GET YOUR OWN SIGNED COPY OF A GREAT FICTION BOOK!" (Yes, all caps.) The book is advertised as in "Brand New" condition, and its subject is listed as "Fantasy." The auction ends Saturday morning. As of Thursday morning, the current bid was $6,100.

Check out Paul's eBay posting for yourself. What I'm wondering is who runs the account victorystoreonline.