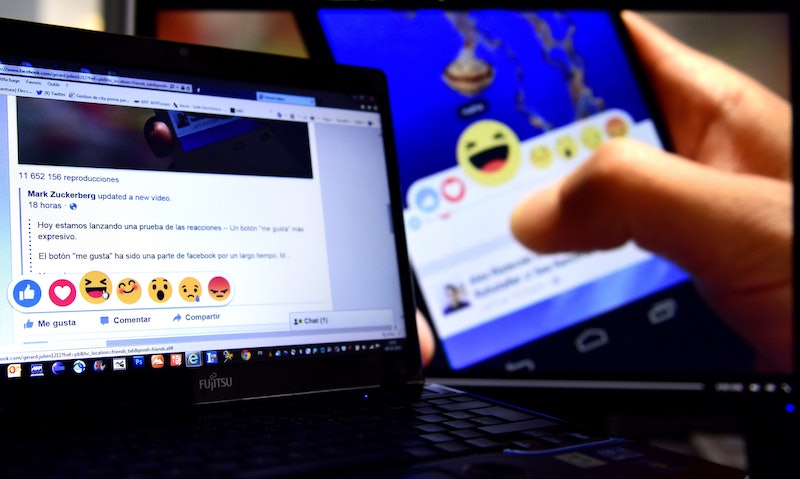 It seems like Facebook users have been begging for a dislike button for years, and rumors about the feature have run rampant. Yesterday, Facebook finally announced their official plan for "like" button reform: Facebook Reactions. The new feature was announced in a video on Facebook Chief Production Officer Chris Cox's page — and, luckily for us, it also showed everyone just how to use Facebook reactions. How handy!

According to TechCrunch, the series of seven reactions ("like," "love," "haha," "yay," "wow," "sad," and "angry") was created with direct user input in mind. Users wrote to Facebook asking for alternatives to a like button; additionally, Facebook observed the most common emotions that were expressed in comments. A combination of these two inputs resulted in six new reactions in addition to the "like" we all know and love.

Facebook Reactions aren't yet available for widespread use; the test of the feature will run only in Spain and Ireland to start, and as Bustle's April Siese noted after the announcement, there is no official timeline for when Facebook Reactions will be available in other countries. But if the video posted by Chris Cox is any indication of what the Reactions will look like in their final form, it's a straightforward and intuitive feature that you'll be able to catch on to in no time. Here, we break down exactly how to express yourself with Facebook Reactions.

1. Be In Ireland Or Spain

Currently, you can only use Facebook reactions if you live in Ireland or Spain. This is simply to test functionality and receive feedback. This also gives Facebook an opportunity to test the feature in both English and Spanish.

In order to access the Facebook reactions feature, press and hold the "Like" button. This will open a menu showing all the reactions you can choose from.

4. Scroll Side To Side

Keeping your finger pressed down, scroll side to side to select a reaction. The currently selected reaction will appear larger than the others.

5. Release On The Reaction You Want To Use

When you've decided how you want to react, release your finger. This will apply your reaction to that post. As you can see, where it previously said "Like" under the post, it now says "Love." Between the post and the buttons there is also an area where it shows the total number of each type of reaction. This post has 25 likes and two loves.

And that's all there is to it. Now we just have to wait patiently for our chance to use Facebook Reactions ourselves!

More like this
Behind The Hilarity Of The "POV: You Walk Into My Room" TikTok Trend
By Lexi Inks
How To Turn Off Night Mode On Your iPhone Camera
By Emma Carey
Here's How To Get Your iPhone To Update Automatically Forever
By Emma Carey
20 Smart Devices Under $35 That’ll Change The Entire Vibe Of Your Home
By Emma Carey
Get Even More From Bustle — Sign Up For The Newsletter