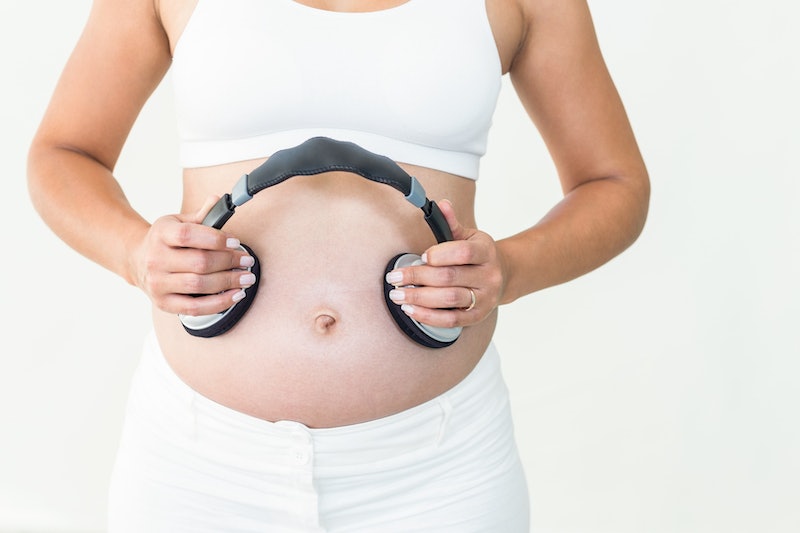 Getting to feel your little guy or girl move around in your belly is probably one of the most amazing parts of being pregnant. (And it definitely beats a bunch of those other not-so-fun pregnancy symptoms you'll probably experience.) But it turns out, your baby is movin' and groovin' in there long before you even start to distinguish those little jabs from standard stomach gurgles. In fact, researchers at the Instituto Marques in Barcelona, Spain have recently discovered that babies react in utero to music as early as 16 weeks, which is weeks earlier than previously believed. Their findings were published late last month in the medical journal SAGE, and are pretty eye-opening.

For the study, the researchers monitored the movement of 106 babies in utero between 14 and 39 weeks old two ways — while music was streamed through headphones on each mother's abdomen, and again while music was streamed using an intravaginal tool. Although the youngest babies didn't respond to the exterior headphones on each mom's belly, the 16-week-old fetuses were seen opening and closing their mouths and moving their tongues when relatively loud, "relaxing" music was played with the intravaginal tool. That's right — they were singing in the womb. And if you don't believe me on that one, there's proof: The researchers captured some pretty amazing ultrasound videos of the babies singing along during the experiment, and it's pretty nuts. But aside from being insanely cool, co-author Dr. Marisa López-Teijón later told Reuters that they believe these "vocalization movements" in the womb help stimulate language. "In other words, learning begins in the womb," she shared.

While most of us can't exactly stream music to our babies through our vaginas on the reg — unless you've got an extra intravaginal radio laying around at home — it's still pretty cool to know that babies are able to learn language so early. But if you think that's cool, there are plenty more impressive things your tiny human can start doing long before entering the outside world.

Baby books going back decades have suggested talking to babies before they're born, which makes it (relatively) easier to soothe them with that same voice after birth. A 2009 study took that one step farther when it found babies not only prefer their mother's language over other languages, but also cry in the appropriate accent. As science writer Annie Murphy Paul explained of the findings in her TED talk, "French babies cry on a rising note while German babies end on a falling note, imitating the melodic contours of those languages... Which may further endear the baby to the mother, and which may give the baby a head start in the critical task of learning how to understand and speak its native language."

The trick to having a kid with an adventurous palate is by varying what you eat during pregnancy, say experts — especially during the second and third trimesters, when a baby's taste buds start developing. Research shows that babies naturally prefer sweet flavors (which preps them for breastfeeding, since breast milk is pretty sweet); but they also sample sour and spicy tastes through the amniotic fluid. As Dr. Julie Mennella told Parenting, "The more varied a mother's diet is during pregnancy and breastfeeding, the more likely that the infant will accept a new food."

They Practice "Walking" To Help Later With Breastfeeding

Babies get super active inside the womb as they grow, with hobbies ranging from sucking their thumbs to playing with their umbilical cord. In 2004, researchers also took ultrasound video that confirms babies as young as 12 weeks practice "walking" along the uterine wall. In his book, Your Amazing Baby, neonatologist Dr. Marshall Klaus said this helps newborns push their ways up to a breast shortly after birth. (Though it'll be quite a few more months before they actually take their first real steps.)

So yea; when you're struggling through the swollen feet, achy back, and many other joys of pregnancy, take comfort in the fact that some pretty cool stuff is going on inside of you — and that tiny human you're growing is probably up to way more than you even realize.