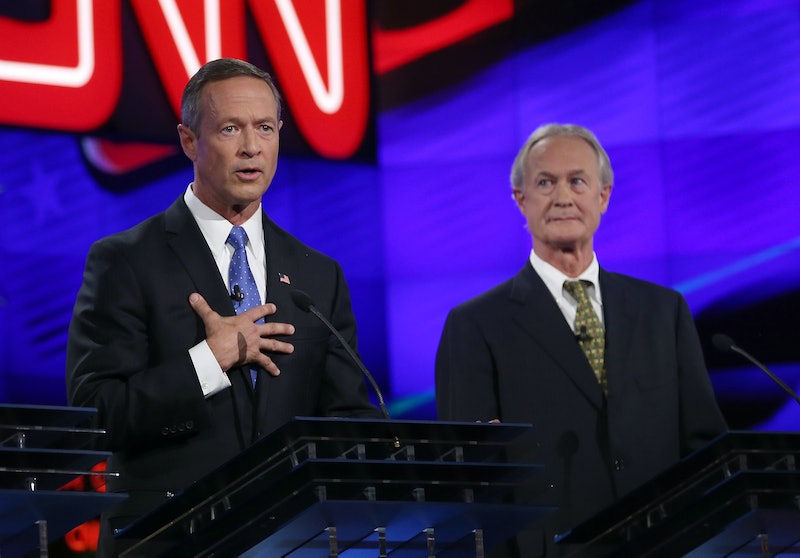 Going into the first Democratic primary debate, there was a lot of pressure riding on Martin O'Malley. O'Malley, the former governor of Maryland, has widely been considered the third-place candidate for the Democratic nomination. But in a field of five, third place isn't a high distinction. Throughout his campaign, O'Malley has found himself in an awkward position as a strong candidate who has been widely ignored by the press. Before Bernie Sanders announced his run, he enjoyed a brief spotlight as Hillary Clinton's only challenger. But in the ensuing months, his campaign has failed to receive national attention or bring in the support of the top two.

Tuesday's debate performance was critical for O'Malley. Without the notoriety of Clinton or Sanders' populist leanings, his campaign hasn't been able to gain traction. But the debate was his opportunity for a Carly Fiorina moment, for him to capture the crowd and ignite his campaign.

And his policies are strong — while Sanders has taken a step back on the gun control debate, O'Malley has been alongside Clinton in his calls for action. And he has the legislative record to back up his words — as the mayor of Baltimore, he enacted strict gun control legislation.

But although the debate offered him a much-needed chance at exposure, for O'Malley's campaign to truly take off, he needed more than one two good moments; he needed a strong, sustained showing throughout the entire debate, including his closing statement. And luckily, he achieved it. His closing was a fitting culmination of his overall debate performance: strong, succinct, and effective at distinguishing himself from the other candidates. And he appealed to a larger amount of voters — especially young ones — during an earnest address to the American people.

To take the actions that we have always taken as Americans, so that we can actually attack injustice in our country, employ more of our people, rebuild out cities and towns, educate our children at higher and better levels, and include more of our people in the sociopolitical and economic life of our country. I truly believe that we are standing on the threshold of a new american progress, unless you become discouraged about our gridlock in Congress, talk to our people under 30. You'll never find among them people who want to bash immigrants, people who want to deny rights to gay couples. That tells me we are moving to a more connected, generous, compassionate place, and we need to speak to the goodness within our country.

O'Malley's debate performance wasn't exactly the Fiorina moment he was hoping for, but it was an excellent first showing. What he needed most was exposure — something that the debate clearly provided. His closing statement was one of his strongest moments of the night. If he can capitalize upon that rhetoric and success going into the next debates, he might just find his Fiorina moment.