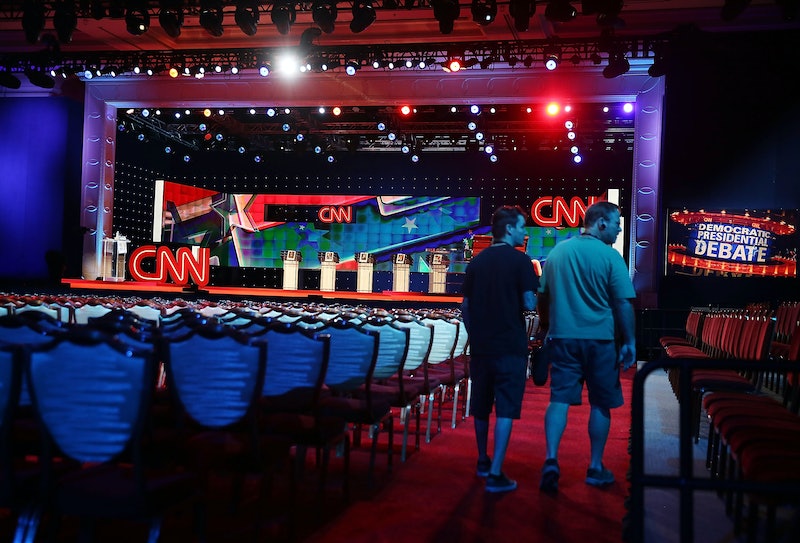 The first Democratic debate of the 2016 presidential election season will air on CNN (and also livestream for free on its website and mobile app) Tuesday evening. Anderson Cooper, Don Lemon, and Dana Bash will moderate the debate in Las Vegas. Cooper has promised to ask "pointed questions" of the candidates while avoiding causing fights between them (thank you, Anderson). Surely, this first Democratic debate will be more civil and issues-centered than the Republican debates, but that doesn't mean we'll be left wanting for things that make our eyes roll. A political debate is a political debate, so be warned: The Democratic presidential debate will still be annoying in its own special ways.

The two frontrunners, Hillary Clinton and Bernie Sanders, are less likely to go after one another on a personal level than Donald Trump, it must be said. But it's my experience that all politicians (especially in the context of a spectacle like a debate) will stoop a little low, avoid the toughest questions, and indulge my own least favorite antic: interrupting one another. This first debate will likely be more exploratory and issues-focused than the Republicans', but anything could happen. So here are some of the most annoying possibilities of what we could see Tuesday evening.

Of course, nobody is likely to be worse than Trump on this, but the Democrats are not above talking over one another or their moderators. I understand that interruptions are inevitable in a debate (and that politicians just seem to get off on doing it, regardless of the circumstances), but it drives me up the dang wall. To counteract the maddening effects of debate interruption, put your TV on mute and read the captions. I'm telling you, it will vastly improve your debate experience.

Any And All Mentions Of Donald Trump

Yes, he is a serious (what does that word mean anymore!?) contender for the Republican nomination, and thus his policies and his impact on the presidential race must be discussed. Whenever Trump has become the subject of debate questioning during the Republican debates, the discourse has usually degenerated into a fancy name-calling contest. Hopefully, the Democrats will at least focus on Trump's policies, since there is a real chance that is what they'll be up against next November.

Don't expect Clinton to get pressed on the matter of who is funding her campaign. Personally, I'd love to hear Clinton explain how and why she has been back and forth on the Keystone pipeline over the last five years, but has accepted hundreds of thousands of dollars in campaign financing from oil lobbyists. It's frustrating, but we shouldn't expect to hear the Democratic candidates answer for their fundraising sources.

Trump announced Tuesday morning that he will be live-tweeting the Democratic debate. Since it's Trump, there's virtually no chance he will hold tone down the absurdity, and we can expect to hear his scintillating thoughts on who is ugly for two hours straight.

Politicians can't help it. They love to pun. And unfortunately, Tuesday's debate is being hosted in a locale that is too easy to joke about, and I fear the Vegas puns and jokes will abound.