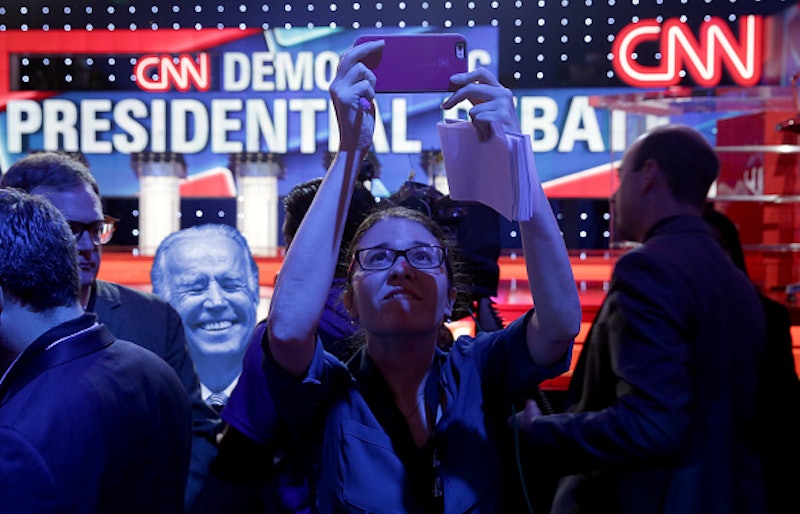 At the first Democratic debate Tuesday night, there will be five podiums on stage, but a sixth set to the side, just in case. No, it's not for declared sixth candidate Lawrence Lessig. CNN set up a space for Joe Biden at the first Democratic debate in case he decides to announce his run for presidency in the hours leading up to the big showdown. Biden has made it pretty clear he won't — he'll be hosting a high school reunion and then watching the debate on television nowhere near Las Vegas.

Biden has had a rough go of it lately. After the death of his son Beau, Biden has publicly grappled with his grief, as well as the pressure that's been put on him to run for president. His emotional interview on The Late Show with Stephen Colbert portrayed an honest man who's truly looking deeply at himself and what he can and cannot handle. But Biden is also known for being fun and lighthearted — he's known as Uncle Joe, for goodness sake. Have you ever seen that man wink? It's incredible.

So I like to think that in-between serious discussions with his family, friends, and colleagues, Biden takes the time to relax every now and then. And even though he won't be debating on stage with the Democratic candidates tonight, I bet if he was, he'd walk off saying "Mischief managed." With that thought, Bustle created some images of what Biden would be doing if he was attending Tuesday's debate. The podium might be there, but Biden won't be — and he's probably giggling a little just thinking about it.

When someone comes on stage to make sure all is good, Biden slowly slips away off the other side.

And when Hillary Clinton walks in, he totally photobombs.

Awash in the blue haze of CNN's spotlights, Biden slips by the cameraman.

But then he just struts his stuff, because y'all should know Biden's in the house.

And when he pretends to be Hillary and hang a sign on her podium, he just cracks himself up.

Biden might not be there Tuesday, but boy do many people wish he was. He may not have photobombed Hillary in real life or hung out with the cameraman, but it definitely would have been a good time. Good luck to Biden on his decision, but for now we'll imagine that this is how the night went down.