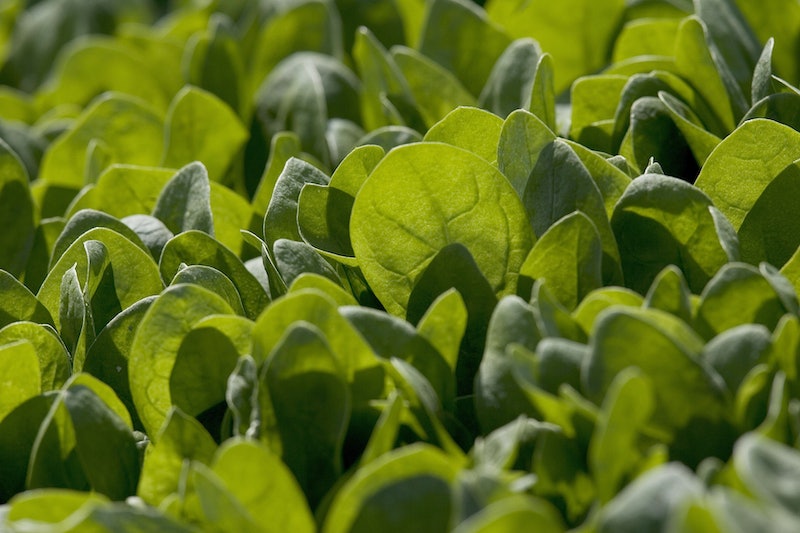 Be careful the next time you whip up a green smoothie or salad. On Wednesday morning, food company Dole issued a recall on bagged spinach in 13 states in the Midwest, South, and on the East Coast. According to the Food & Drug Administration, Dole ordered the recall after a sample of the spinach tested positive for salmonella. If you've purchased spinach from Dole lately and are concerned this recall might affect you, check the bag to see if the product code, located on the top right corner of the package, is either A27409B or A27409A. The possibly contaminated product has an "Enjoy By" date of October 15 and UPC number 7143000976. You can find the UPC code on the back, below the bar code. Definitely read the bag closely before enjoying your spinach.

Dole said in a press release that no illnesses had been reported as of Wednesday night. The recall is a precautionary one, resulting from the salmonella-positive batch. According to CNN, the recalled products were sold in Connecticut, Indiana, Kentucky, Maryland, Massachusetts, Michigan, Missouri, New Jersey, New York, Ohio, Pennsylvania, Tennessee, and Wisconsin.

Salmonella is caused by a bacteria that occasionally enters food products and packaged foods during processing. The Centers for Disease Control and Prevention reported on their website that 1.2 million people contract salmonella each year in the United States. Children under five, the elderly, and sick people are particularly at risk, as their immune systems are weaker. In 2015, salmonella was found in a number of products, including cucumbers, frozen fish, and also in Aspen Foods and Barber Foods chicken products.

If you did buy a bag of the possibly contaminated spinach and already ate some, don't panic. You probably won't need to go to the hospital or see a doctor. The symptoms of the bacteria are diarrhea, nausea, fever, and stomach cramps. While these certainly aren't fun, they normally last four days to a week. Of course, you should see a doctor if symptoms persist, and stay hydrated throughout your illness.

The recall does not affect similar product Dole Baby Spinach, so if you bought a bag of that recently, you're in the clear.

This is not the first recall the company has issued in recent years. In 2014, a similar product, Dole Italian Salads, were recalled after a batch tested positive for a different bacteria, Listeria monocytogenes. That recall was also precautionary, and no one reported an illness at the time of the press release.

If you're concerned about any products that you purchased, or have questions for the company, you can contact the Dole Food Company Consumer Response Center at (800) 356-3111. The hotline is open 8 a.m. to 3 p.m. (PT) Monday through Friday. According to both Dole and the FDA, though, if you know you have a bag of the recalled spinach, you should throw it away. Trying buying some kale instead. It's much trendier.

More like this
The 8 Best Fridge Organizer Bins To Tidy Everything From Produce To Drinks
By Rachel Dunkel
Got Brain Fog? Here Are The Best Supplements For Memory & Cognition
By Carolyn Steber
Chris Kaba's Family Continue Fight For Justice After Viewing Police Bodycam Footage
By Sophie McEvoy
These 2 Women Could Be America’s First Lesbian Governors
By Tess Garcia
Get Even More From Bustle — Sign Up For The Newsletter