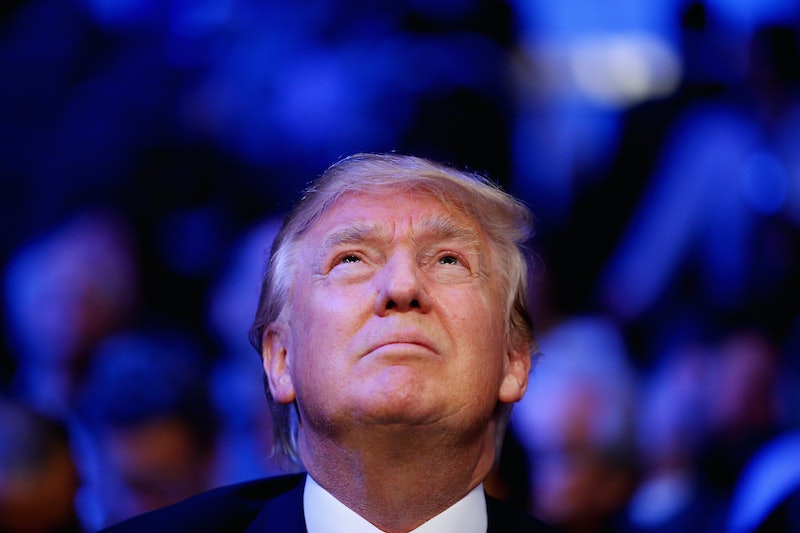 Well, what did you expect? Less than an hour after vice president Joe Biden announced that he would not be running for president, Donald Trump jumped into the fray with a comment that is ... a sort of an open attack on Hillary Clinton in the form of a backhanded compliment towards Biden. At its core, however, Trump's response just reveals how afraid he is of the Democratic Party's frontrunner. "I think Joe Biden made correct decision for him & his family. Personally, I would rather run against Hillary because her record is so bad," he Tweeted.

Make no mistake; Biden's decision not to run for president is good news for Clinton. Not only does it free up Obama to endorse his former Secretary of State sooner rather than later (possibly even before Iowa), but Clinton is also the most likely candidate for potential Biden voters to turn to. Given that both Biden and Clinton were members of Obama's administration and share many political positions, having just one of them run sets that candidate aside from the pack.

Trump knows this. In one of the only politically savvy moves he's made since announcing that he wants to be the leader of the free world, he is focusing his energies on criticizing Clinton instead of any other Democratic candidate (or would-be candidate, in the case of Biden). If Trump does become the Republican nominee — as much as many of the party's lawmakers would groan over it, Trump has commanded the majority of the Republican vote in the polls almost since the outset — he is more likely to be running against Clinton than against, say, Bernie Sanders or Martin O'Malley.

If Trump's campaign is taken to its logical conclusion (God help us all), he will in all likelihood be running against Clinton. Publicly mocking Clinton's record a full 13 entire months before they may or may not go head-to-head shows that Trump's in fighting spirits — and, even more frighteningly, that he thinks he's going to go all the way.