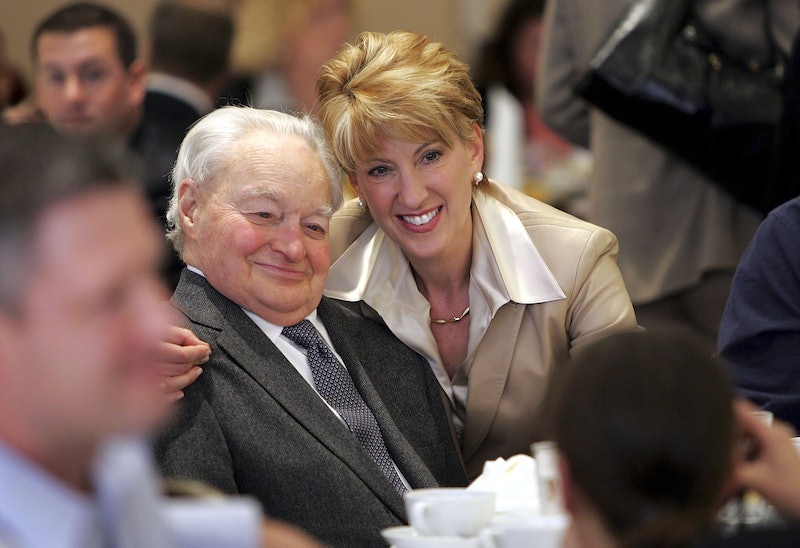 Former Hewlett-Packard CEO and Republican presidential candidate Carly Fiorina may not be a Washington insider, but she also isn't fully an outsider. Fiorina's father Joseph Sneed was appointed by President Richard Nixon first as deputy attorney general — the second highest position in his Justice Department — and later as a judge on the Ninth U.S. Circuit Court of Appeals in San Francisco. He made a name for himself as a judge and pushed his children to follow in his footsteps. Fiorina credits her father for much of her success but also followed her own path.

Sneed was born in a small town in the Texas Panhandle to a cattle rancher and cotton farmer. He went to Southwestern University before serving in the Army Air Forces during World War II. In addition to Carly, he and his wife Madelon, an artist, had another daughter and one son. After leaving service he attended the University of Texas Law School, where upon graduation in 1947 he began teaching law. He went on to teach tax law at Cornell, Stanford, the London School of Economics, and even the University of Ghana. In 1971, he became dean of Duke Law School. He didn't stay long, though, as Nixon — a Duke Law grad — would soon appoint him to the Justice Department in 1973.

His time in Nixon's DOJ was even shorter, about six months. His appeals court appointment was in August that same year and marked the beginning of a three-decade career. After his appointment, the Ninth Circuit became one of the nation's most liberal circuit courts due to appointments by Jimmy Carter. Sneed told a Wall Street Journal reporter in 1984 that the liberal appointees had a "different way of looking at the world." "We often divide on what you could call political lines," Sneed said. "I'm usually on the losing side on panels in this circuit."

Many of Sneed's opinions — even if some started as dissents — have received conservative accolades. In 2001, his dissent in a case trying California's three strikes law was later cited by the Supreme Court to uphold the law. A man who was sentenced to life in prison after stealing nine videotapes from Kmart. He called the sentence "severe" but argued that the minimum sentences were put in place through the democratic process. Another of his dissents upheld by the Supreme Court led to a 63-year-old grandmother's eviction from public housing due to drugs found on her daughter blocks away from the house.

Sneed was also responsible for selecting Kenneth Starr as the investigator into the Clinton Whitewater real estate scandal, which led to President Bill Clinton's impeachment for lying about his sexual misconduct. As part of the three-judge panel appointed to choose the independent counsel on the Whitewater case, Sneed suggested Starr to expand the scope of the investigation.

Sneed died in 2008. In her father's obituary, Fiorina described her father as her "true north" and credited him with giving her "a strong internal compass." She almost followed in his footsteps. Fiorina started law school at UCLA based on her father's encouragement but was unhappy. "I told him I hated it," Fiorina said an Amazon.com interview. "He was concerned, but he didn't want me to quit. He had always taught me that quitting was the same as failure — you stuck it out, even in a tough situation." She eventually dropped out, and he later came around and supported her business career. In her memoir, Tough Choices, she said her father knew HP needed her and encouraged her to sell herself in the interviews. "They need change and you can change them," she recalled.

He would probably say the same thing to Fiorina now, just this time she's running for president of the United States.