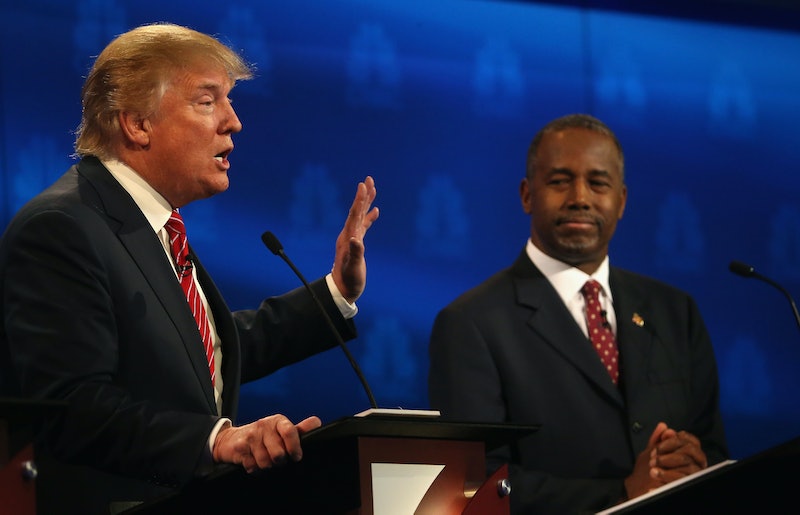 Most people seem to agree that Jeb Bush was the big loser in Wednesday’s Republican primary debate. However, the media is having a bit of a tougher time assessing the performance of Donald Trump, whose surprisingly low-key demeanor at the debate lacked the bombast, insults, and energy of his earlier performances, and indeed most of his public appearances. Notably, Trump was chummy and conciliatory towards Ben Carson, at points going out of his way to associate the two with each other. At first glance, this was odd; after all, Carson is his number one rival for the nomination. So, why didn’t Trump attack Carson at the debate?

Because Trump needs Carson — and Carson needs Trump. Counterintuitively, it is in both of their interests for the other to stay in the race for as long as possible. Trump knows this, and that’s why he didn’t take any shots at Carson on Wednesday. The reasoning here is simple: As long as both candidates are in the race, it will be extremely difficult for any of the other Republicans break out from the pack and become the nominee.

In the latest polling averages, Trump and Carson collectively command about 49 percent of the support of Republican voters. That fact, in conjunction with the huge number of candidates in the field, has made it nearly impossible for any other Republican to get more than single-digit support for any extended period of time. Rubio’s performance on Wednesday has been widely praised, but guess what? If Jeb Bush dropped out of the race and all of his supporters got behind Marco Rubio, Rubio would still only be in third place. You can add Carly Fiorina’s supporters into the mix, too; Carson and Trump would still dominate.

It’s tempting to write off the two outsiders as flashes in the pan. But Trump and Carson have been leading for months straight, and despite many predictions to the contrary, the trend has stuck. Trump’s vitriolic persona and Carson’s catatonic speaking style have done absolutely nothing to diminish their support among Republican voters. In fact, the opposite has happened: The two outsiders’ resilience already forced Scott Walker, who many believed would be the candidate to beat, to withdraw from the race.

However, all of this would change overnight if either Trump or Carson — it doesn’t matter which one — was no longer running. Imagine if Carson withdrew from the race. Suddenly, almost a quarter of Republican voters would be left without a candidate to support. If even a small majority of them decided to back Rubio — whose policy positions are almost identical to Carson’s — Trump would be finished. He would no longer be the Republican front-runner, the favorite of the GOP establishment would suddenly be at the top of the polls, and the race would be more or less finished. This works even if you replace Rubio with Fiorina, Cruz, or Bush; the results would be the same.

But it’s very hard to imagine any of Trump’s fans switching their allegiance as long as he’s in the race, and the same goes for Carson. They’re both extremely unique candidates, and because they appeal to very different types of voters, there’s little risk that, say, Carson will be able to peel off support from Trump.

The result is that Trump really has no reason to attack Carson. At least, not yet: Over time, more candidates will drop out of the race, and if Trump and Carson are still standing, they’ll eventually have to start competing with each other (because, at the end of the day, somebody has to win the nomination). But as of now, this race is Trump and Carson versus everyone else. That’s why, in the CNBC debate, Trump focused his ire not on Carson but John Kasich, the “reasonable” Republican who the party’s establishment naively hopes will break out and become the nominee.

But that’s wishful thinking. Trump and Carson have effectively boxed out every other Republican candidate, and they’ve been doing it for months. This is why they didn't attack each other Wednesday. It's also worth nothing that, when CNBC attempted to impose a debate format that the candidates disagreed with, it was Carson and Trump who banded together and threatened to boycott the forum. At the end of the day, they need each other. It’s still possible that one of them will implode (although it’s hard to imagine how), but until that happens, this is the Trump and Carson show, and neither Trump nor Carson has any incentive to change that.