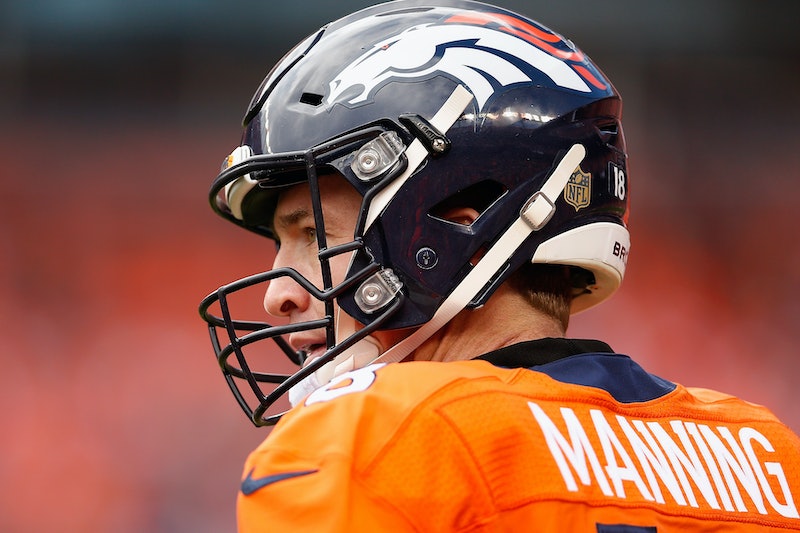 The big afternoon is nearly upon us. On Sunday, the NFL's Super Bowl 50 will be kicking off in Santa Clara, California, turning the spotlight to a pair of talented, dynamic teams: the Carolina Panthers and the Denver Broncos. But for all their talents, the teams are led by a pair of quarterbacks at very different stages of their careers — Cam Newton on the Panthers side, the rocket-armed, hard-charging likely MVP; and Peyton Manning, an all-time great, but in blatantly clear decline. So, will Peyton Manning retire after Super Bowl 50?

The short answer is that he hasn't said yet, but the longer, more intricate answer? Probably. In the aftermath of the Broncos victory over the New England Patriots in the AFC Championship game, according to ESPN, the future hall-of-fame quarterback (and tireless Papa John's pitchman) was caught by TV cameras telling Patriots head coach Bill Belichick, "This might be my last rodeo, so it sure has been a pleasure."

Although Manning has since responded to the moment, with a generous mixture of good humor and irritation, the impact of that scene at midfield last week was pretty obvious — if Manning isn't planning to retire, he's sure thinking about it. Here's what he told reporters on Monday when pressed about his plans, as 9NEWS' Mark Klis detailed.

The people I've talked to they've said it really is a distraction. A lot of times those teams didn't have great seasons because of all the distractions they had to deal with those honoring a player. Every week this is last time you're going to play in Oakland or Kansas City. Everything is the last time. ... In a team sport I don't think it's fair to the guys you're playing with. If you were a golfer it'd be different. And I don't know the answer.

The only real question, such as it is, is whether his decision will be swayed by the outcome of Sunday's game. Despite having one of the most storied careers in NFL history, as well as possessing a slew of statistical records and accolades (he's thrown more touchdowns than anyone else in league history), he's come up painfully short on the biggest stage two times before — in 2010, his Indianapolis Colts lost to the New Orleans Saints, and just two seasons ago, his Broncos were positively walloped by the Seattle Seahawks, in what may have been the most humiliating loss of his career.

Pride is a big thing when you're at the top of your sport for nearly 20 years, and as such, it's fair to wonder if Manning would really want to leave the sport behind if, by some chance, the Panthers obliterate his team the way the Seahawks did in 2014. Obviously there's no way to know for sure whether that will happen, but it bears mentioning that the Panthers have been no strangers to lopsided scores this postseason: They dusted their other two opponents, the Green Bay Packers and Arizona Cardinals, by a combined score of 86 to 44.

But on the other hand, if he did lose badly, would it be worth it to come back? Manning's just wrapping up an in jury-riddled 2015-2016 campaign that saw him post the worst numbers of his career. And with his 40th birthday just months away, there's very little reason to think Manning could come back and return to a higher level of play than what he's seen before.

Whatever happens, however, all the clear indications are that this could be the last time you'll see old number 18 slinging the football around. During an appearance on the NFL Network on Monday, league insider Ian Rapoport also corroborated these rumors, saying "I also know he has told close friends that he expects this to be his last game as well."