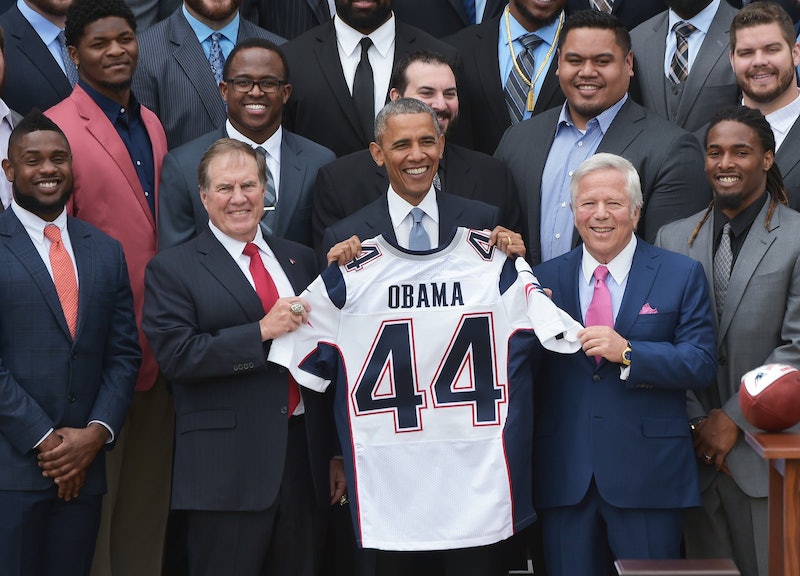 This year's Super Bowl 50 is a big one — and not just because Peyton Manning will be playing. It's also a special year for President Obama and First Lady Michelle Obama, as it's the final Super Bowl for the Obama administration. Traditionally, every year before the kickoff, the president sits down for a pregame interview to discuss politics, football, and make his predictions for the winning team. This year, they are changing it up a bit, as CBS This Morning co-host Gayle King will interview the president and First Lady together.

The Big Game will be broadcast this Sunday, Feb. 7 and this year's pregame programming will start at 2 p.m. ET. King, a television journalist who's also a best friend of Oprah Winfrey's, is a great choice for the Obama's final pregame interview, as they discuss politics and current affairs, but the interview will likely have a friendly and familiar feel. Since joining CBS News in 2011, King has interviewed a number of high-profile celebrities on CBS' morning show, including former New York City Mayor Michael Bloomberg, pop stars Taylor Swift and Jennifer Lopez, and actor Tom Hanks. And this isn't her first interview with the First Lady either. The two sat down at the White House in Jan. 2012 to discuss life in the White House, family, and parent-teacher conferences.

Gayle knows how to drive conversations that are compelling and multi-dimensional, so we get an even better understanding of the President, the First Couple, and their plans for the future.

Because it's the final pregame show for the president, a compelling and multi-dimensional conversation might just be perfect. And maybe this year's interview with King will be kind of like Super Bowl 50 and chill? (OK, bad joke but I tried.) As we prepare for Sunday's Big Game with our beers, our dips, and our anticipation for the newest wave of Super Bowl commercials, here's a better look at Gayle King.

When King Posed With BFF Winfrey During Their Fiji Vacation

When She Made An Important Statement With Oprah Magazine About Gun Violence In The U.S.

Gayle King certainly has a track record of driving multi-dimensional conversations. Let's see what happens with the final pre-Super Bowl interview for the Obamas this Sunday.