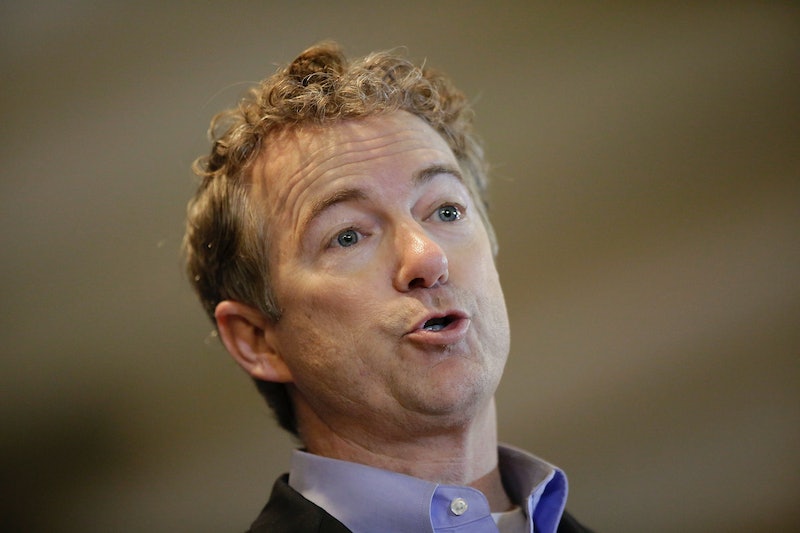 On Wednesday morning, according to Politico, Republican presidential candidate Rand Paul announced he is dropping out the race. The news comes after the Iowa caucus results show he's polling in the single digits. The news surfaced after three sources close to the former candidate told Politico that he is suspending his campaign. The Kentucky Senator won just 4.5 percent support among Iowans, trailing fourth place candidate neurosurgeon Ben Carson by almost 5 points. Rand released a statement of resignation.

It's been an incredible honor to run a principled campaign for the White House. Today, I will end where I began, ready and willing to fight for the cause of Liberty.

Prior to the Iowa caucuses on Monday, Rand let his Twitter followers know that he was appreciative of his supporters in the state and was looking forward to continuing his campaign in New Hampshire. On the evening of the same day, Rand gave a speech to a small group of about 150 supporters in Des Moines and promised them that liberty will live.

It's the remnant, it's the few, it's those who will stand up and say "We're not trading our liberty. Not now, not ever. Hell no." Against all odds, against a little bit of bias here and there, tonight the liberty movement beat four governors from the establishment. ... I think the idea of liberty lives on. In you, in us. We will continue to fight. Tonight is the beginning. Liberty will live on. We fight on.

Now, Paul has given up the idea of furthering that idea of liberty in the Oval Office. In reality, withdrawing from the race was a logical decision for Paul, who is also in the process of running for reelection as Kentucky's senator this upcoming fall — a feat that is statistically more probable than winning the Republican primary against top candidates Donald Trump and Ted Cruz.

After the caucus results were announced, speculations about Paul's potential withdrawal from the race already began to amount due to his diminishing support in the polls and his bid for another term as Kentucky's senator. According to The Des Moines Register, only the top three candidates traditionally stay in the race. With over ten Republican candidates remaining, several more will likely be dropping out of the race in the near future. Rick Santorum, Chris Christie, Carly Fiorina, John Kasich, Mike Huckabee — who dropped out on Monday night — and Jeb Bush received less support than Rand in the Iowa caucuses.

Despite the letdown for Rand's campaign, the libertarian-esque senator has maintained a positive and gracious attitude, releasing this video on Twitter just minutes after announcing his withdrawal.