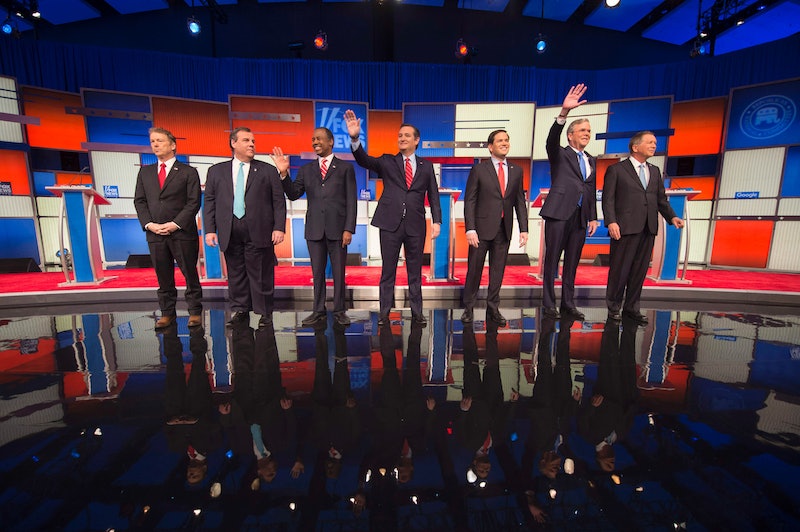 On Wednesday morning, Senator Rand Paul officially dropped out of the GOP race for the Oval Office, narrowing the field further in the post-Iowa caucus reality check that prompted Mike Huckabee and Martin O'Malley to give up their White House dreams as well. The combatants have changed so much recently, you might be wondering: Who's still left in the presidential race? Update: Carly Fiorina, Rick Santorum, and Chris Christie have also dropped out.

If drop outs were based solely on polling numbers, Rand Paul could have stayed in the game a little longer. His fifth place finish behind Carson in Iowa was actually a fairly respectable showing, and much higher in the polls than Bush, Christie, Kasich, Fiorina, or Santorum, who all still plan to continue their campaigns at this point.

But the real unifying theme for drop outs at this point in the race seems to be money. O'Malley, Huckabee, and Paul's campaigns had each taken on significant debts, according to their most recent campaign finance reports. The financial burden of the campaign lies on the candidates, and covering those debts must be tantamount in their decision to continue a campaign.

Only one candidate deviates from this pattern, former Pennsylvania senator Rick Santorum. Santorum posted both dismal polling numbers in Iowa and over $150,000 in debt on his last campaign finance report, yet his campaign is soldiering on to South Carolina this week. While most other Republican candidates are focused on next Wednesday's New Hampshire primary, Santorum is bouncing around the Palmetto State, attempting to save his campaign with an unconventional, last ditch effort. If he can't pull it together before the South Carolina primary on Feb. 20, the pattern seems to predict that Santorum will drop out.

For the Democrats, everyone knew what was coming. O'Malley couldn't keep up with Clinton's establishment support and Sander's popular appeal, but he stuck it out for as long as he could. And while his dark horse candidacy was appealing to those who followed it intentionally, the media quickly stuck to the Hillary vs. Bernie narrative and barely gave O'Malley a word in edgewise. Between his lack of exposure, his lack of experience, and his lack of fundraising prowess, O'Malley's campaign seemed destined for failure all along.

The race is getting real now. Actual voters are making actual choices, and it means the candidates are getting an idea of who has staying power and who doesn't. For those who have dropped out, the voters didn't support them enough, and they took the hint.