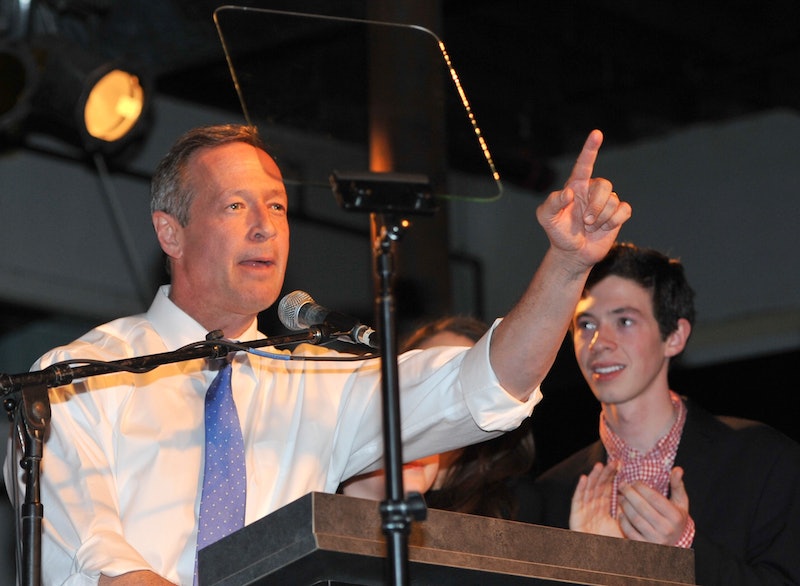 After fighting each other to what was essentially a draw in the Iowa caucuses, Bernie Sanders and Hillary Clinton are duking it out once again at Thursday's Democratic debate. One person was conspicuously absent from the stage, though: former Maryland Gov. Martin O'Malley, who ended his presidential bid earlier in the week after a poor showing in Iowa. But a couple of sharp-eyed reporters spotted O'Malley's podium backstage at the debate — or rather, the podium that would have been O'Malley's if he'd stayed in the race. It was a bittersweet sight, the last vestige of his failed presidential run and, sadly, a pretty good metaphor for the O'Malley campaign.

O'Malley's presidential run was always something of a curiosity. At its peak, the Democratic field had five candidates: Clinton, a centrist; Sanders, a leftist; Jim Webb, a conservative; and Lincoln Chafee, an anti-war peacenik. With that lineup, it was never quite clear what role O'Malley would play. He didn't fill any gaps in the roster, and as such, his candidacy lacked a clear rationale or purpose.

That's probably one reason his campaign never caught steam, and O'Malley suspended his campaign after receiving just 1 percent of the vote in the Iowa caucuses. But because he dropped out just three days before the New Hampshire debate, MSNBC had already a podium ready for him, and some reporters spotted it backstage in a storage closet before the debate.

The podium is an unfortunately appropriate symbol of the O'Malley campaign itself: invisible to most people, easily forgotten by those aware of it, and ultimately a non-factor in the Democratic primary.

But hey, let's give credit where it's due. Unlike some other candidates, who hardly even campaigned at all, O'Malley did make a legitimate effort during his brief presidential run. He barnstormed Iowa, participated vigorously in the debates, released policy platforms, and so on. He may not have been successful, but at least he gave it his all.