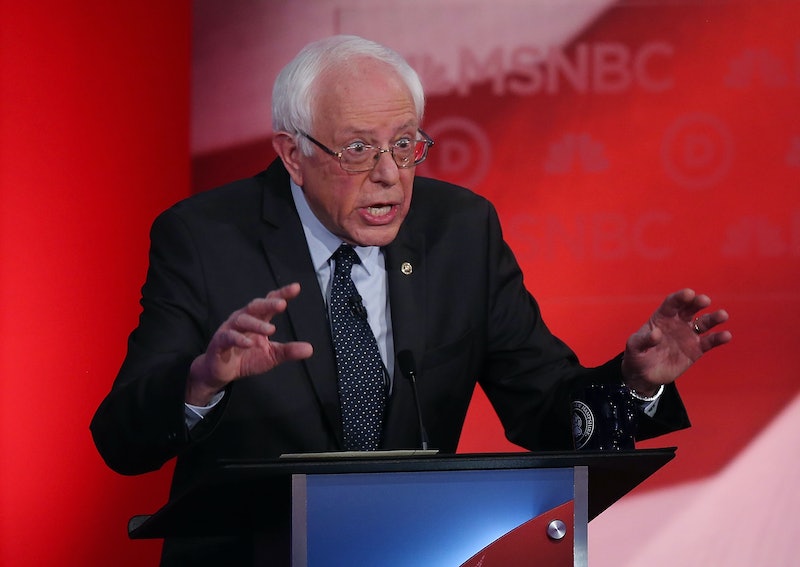 During Thursday night's Democratic debates, Hillary Clinton made it her business to lay out Bernie Sanders' foreign policy flaws to the American public. In just the last half hours, the Vermont senator's weakness on international affairs compared to the former secretary of state became painfully clear — stress on "painfully." Sanders appeared to struggle to answer a fairly basic question about whether he thought Russia, Iran, or North Korea the gravest threat to the United States. He fumbled and sputtered on North Korea, describing it as "a very strange situation because it is such an isolated country.”

Social media was quick to realize that Sanders visibly struggled to string together an answer. New York Times journalist Nicholas Kristof tweeted, "Sanders is pretty incoherent on foreign policy," though also added, "But to his credit he was right on what counted most, the Iraq war, and Clinton was wrong." Yoni Appelbaum of The Atlantic was a much harsher critic of Sanders' foreign policy response, writing:

It’s baffling that a man as smart as Bernie Sanders has gotten this far into his campaign with gaining greater fluency with the core foreign-policy challenges of the contemporary world. Is it simply a lack of interest in non-economic policy issues?

It's no surprise that foreign policy is where Clinton shines in this race, and everyone watching the debate could see that she owned the topic.

Clinton was quick to criticize Sanders' boast that he had voted against the war in Iraq, firing back that it was no indication that the Vermont senator could handle the foreign policy realities of 2016. "A vote in 2002 is not a plan to defeat ISIS. We have to look at the threats that we face right now, and we have to be prepared to take them on and defeat them," Clinton said.