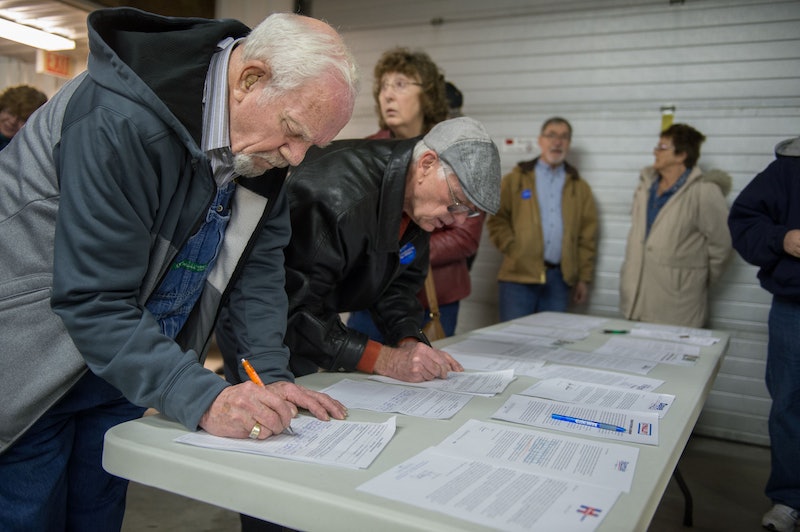 On Tuesday, voters in New Hampshire will take to the ballot boxes in the first primary of the 2016 election. Technically, Iowa was the first chance for Americans to officially pick a presidential candidate, but there's a major difference between that state and New Hampshire. Iowa held a caucus, whereas New Hampshire will hold a primary. The country's somewhat divided on the two electoral styles, but a lot of states have primaries instead of caucuses.

In case you're unsure of the difference between the two (let's be real, it's pretty confusing), here's the deal. A caucus involves people publicly choosing a candidate by either raising their hands or physically moving to candidates' designated areas (as was the case in Iowa). A primary works much like general elections, with voters casting private ballots. Each state and U.S. territory — including Puerto Rico and Guam — hold either one or both form of election before each party chooses a nominee for president. In total, 40 states and Washington D.C. hold primaries. However, many states conduct both types for one for both parties. Only 35 states are exclusively primary states, compared to 10 that have stuck to just caucuses. If you're thinking the American presidential primary process is extremely complicated, you aren't wrong.

Staggered from February to June, these preliminary elections determine how many state delegates each candidate gets. So, much like the electoral college in the general election, the actual votes don't determine the parties' nominees. The Democrats assign delegates based on what percentage of voters supported each candidate. Republicans, on the other hand, let each state decide whether to use the same proportional method or a winner-takes-all approach, so it differs from state to state.

After New Hampshire, South Carolina will be the next state to hold primaries, beginning with the Republican party Feb. 20 and following up with the Democrats on Feb. 27. March 1 is known as Super Tuesday, since 12 states and American Samoa all hold caucuses and primaries simultaneously. Only Alaska and American Samoa will host caucuses that day, with the other 11 states — Alabama, Arkansas, Colorado, Georgia, Massachusetts, Minnesota, Oklahoma, Tennessee, Texas, Vermont, and Virginia — opting for primaries.

Primaries gained popularity in the 1960s because they make it easier for more Americans to participate. While caucuses are pretty time-consuming and require voters to be registered with a party beforehand, primaries are much quicker for individuals and are open to the general voting public. The nation will get a better idea of which two candidates voters will choose between in November as more primaries and caucuses reveal who has more public support. It's a long process that's only just begun.