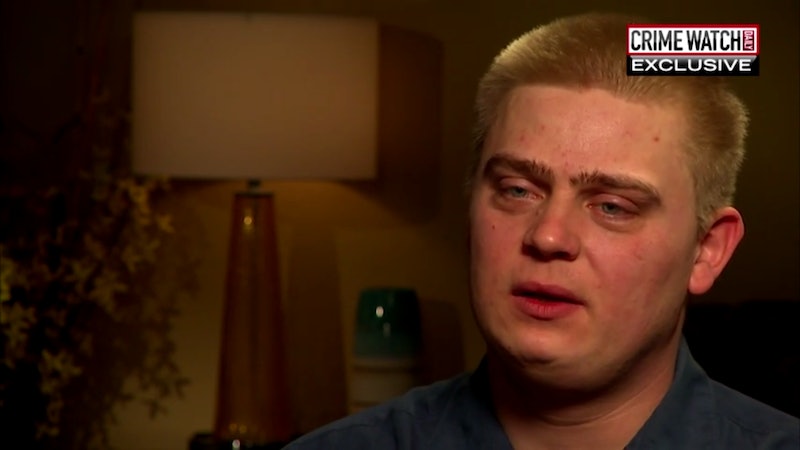 "Avery" has become a household name since December, when Netflix released the documentary Making a Murderer, which chronicled the two trials that landed Steven Avery in prison. On Monday, an interview aired on Crime Watch Daily in which Avery's twin sons explained how the name has impacted their lives. Steven Avery Jr. and Bill Avery, now 30 years old, were only 10 days old when their father was imprisoned in 1985 on a wrongful rape conviction, for which he spent 18 years in jail, leaving behind three other children and his then-wife. Four years after being exonerated, he was convicted of killing 25-year-old photographer Teresa Halbach, and remains in jail today.

Steven Jr. and Bill shared through teary eyes that their last name has caused problems in their lives. "My last name got better," once Avery was exonerated, "[the public] joined our side in a sense," Steven Jr. said during the interview. But the relief didn't last long. "A lot of people [think] we're a bunch of troublemakers, bad people, we don't care about the law ... the sins fall on the son, which it shouldn't be like that." Steven Jr. said that he wanted to take his wife's last name when he got married, but she preferred to stick with tradition. He also explained how his father's legacy likely cost he and his brother a career opportunity: "Me and my brother, we applied for this security firm. We were more than qualified ... this is hearsay, but one of the main guys said, 'It'd be a cold day in hell before they ever get hired.'"

Bill and Steven Jr. haven't spoken to their father in more than 20 years, and expressed how distant from him they feel. When asked about his feelings toward his father, Bill said, "I kinda in a way have none, I guess. I just see him as a complete stranger." Steven Jr. had a similar sentiment, but with some hope: "He deserves to get to know me. I am his son. I don't look at him as a father, [and] never will. I'm a 30-year-old man. It's kind of late to get a bond like that, but I'm willing to, I guess, give it a shot."

Both Steven Jr. and Bill have families of their own. When Steven Jr. was asked about how his life would be different had his father been around, he said, "I had a good life. I would not trade this life to see where that life led." Watch a clip of the interview above to hear more from the Avery twins.

More like this
Where Is Armie Hammer’s Ex-Wife Elizabeth Chambers Now After 'House Of Hammer'?
By Grace Wehniainen and Radhika Menon
Chris Kaba's Family Continue Fight For Justice After Viewing Police Bodycam Footage
By Sophie McEvoy
Jeffrey Dahmer’s Arresting Officer John Balcerzak Got His Job Back After Being Fired
By Grace Wehniainen
Gabby Petito’s Family Responded To The New Lifetime Movie About Her Final Days
By Grace Wehniainen
Get Even More From Bustle — Sign Up For The Newsletter