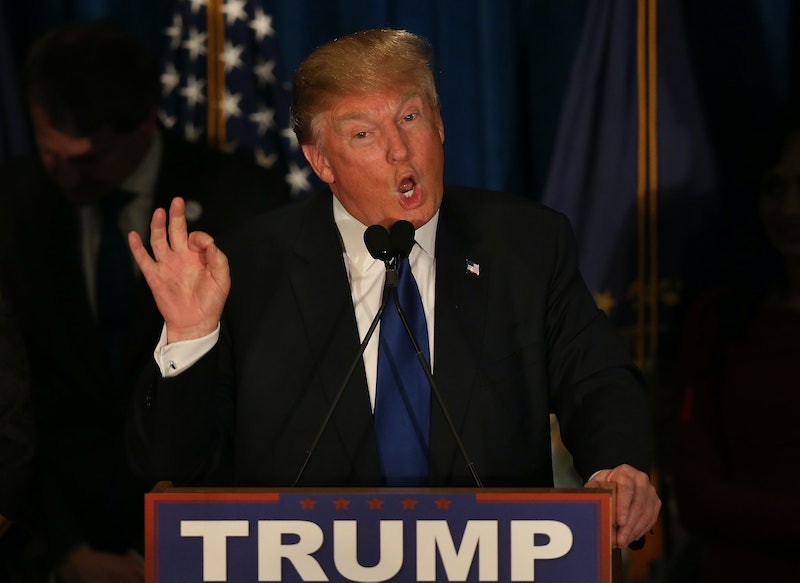 Welcome to the new political reality. The Iowa caucuses and the New Hampshire primary are both over and done with, and now the state of the Democratic and Republican races are coming into sharper and sharper focus. On the Democratic side, it looks like America's in for some political blood sport, with the underdog candidacy of Vermont senator Bernie Sanders pushing Hillary Clinton to the brink in Iowa, and dispatching her by double-digits in New Hampshire. But what about the GOP? Will Ted Cruz or Donald Trump be the Republican nominee?

Here's what can definitely be said: If history is any guide, one of them will probably end up as their party's standard-bearer come the Republican National Convention in July. Since the Iowa caucuses as you know them today began in 1972, only one candidate for president in either party has secured the nomination without winning in either Iowa or New Hampshire.

That man was Bill Clinton in 1992 — he suffered a bona fide shellacking in the Iowa caucuses at the hands of Tom Harkin, who represented the state in the Senate, and finished second in New Hampshire behind former Massachusetts senator Paul Tsongas. Never before, and never since, has a candidate prevailed in the primaries without winning at least one of the first two voting days of the race.

What this means, in real terms? Well, it's not very illustrative for the Democrats — Clinton and Sanders won Iowa and New Hampshire respectively, and they're the only two Democrats left in the race (sorry, Jim, Martin, and Lincoln). So on their side of things, at least, the trend will assuredly continue. On the Republican side, however, things still feel tantalizingly wide-open, as if the trend could be bucked once again.

Obviously, Cruz won Iowa, and Trump notched the first win of his political career on Tuesday night, dominating in New Hampshire. Both of these outcomes once seemed unthinkable, given Trump's complete lack of political experience and Cruz's massive personal unpopularity among his colleagues, even his fellow Senate Republicans, but here we are! And either would be a tremendous upset as far as the GOP establishment is concerned — they were banking on something more in the Jeb Bush, Chris Christie, or even the Marco Rubio mold.

But there's one possible out from this peculiar state of affairs — an escape hatch which, if the Republican electorate wises up, could prevent this reality from coming to pass. His name is John Kasich, the runner-up in Tuesday night's primary, a moderate Republican who'd ostensibly be competitive in a general election, and even more importantly, the popular sitting governor of Ohio. Make no mistake: nominating John Kasich makes it much more likely that the Republicans win Ohio. And winning Ohio is a virtual must if they're going to seize the White House in November.

And while Kasich certainly isn't an orator of the sort Bill Clinton was in 1992, he now finds himself in precisely the position Clinton did back then — trying to leverage an utterly unexpected second-place finish in New Hampshire into broader appeal in the states to come. It's still going to be a hell of an uphill climb, make no mistake — Trump is leading by a big margin in the upcoming South Carolina primary, up about 16 points against the rest of the field. And moreover, Cruz is running in second place, with Kasich sitting all the way down at just two percent.

Simply put, unless Kasich can build some serious momentum in just two weeks, and notch at least a credibility-affirming second-place finish against Trump — hopefully buoyed by some also-rans like Christie, Carson, and Fiorina dropping out of the race — he's not going to find any meaningful breathing room. And with Rubio's campaign in shambles after Christie's evisceration of him during the eighth Republican presidential debate, the options are growing fewer by the day.

Which is another way of saying that the GOP may soon be staring down one of the outcomes it sorely wanted to avoid. At least they can take solace in this much: it's not likely that you'll see a Trump/Cruz ticket come November, right? If you're curious to see how this all shakes out, you'll want to pay attention to the upcoming Republican primary in South Carolina — it'll be going down on Saturday, Feb. 20.