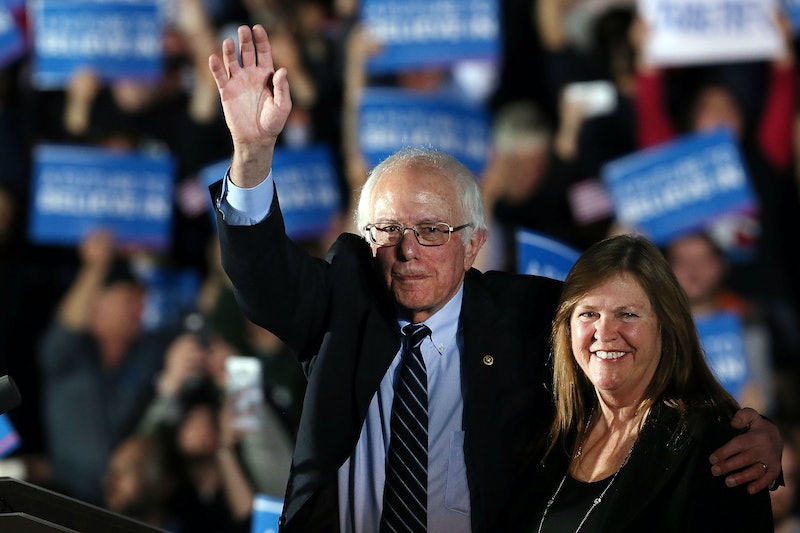 Leaving New Hampshire, exit polls show that both outsider candidates, Donald Trump and Bernie Sanders, have expanded their appeal among varying groups — strengthening the possibility that either or both parties could see their establishment candidates beaten in even more upcoming primary contests. Both candidates won by a large margin, and we'll take a look at who's voting for them — and what they're considering when they do.

Trump took a much larger portion of the vote than any other Republican, with upwards of 35 percent of the vote. The nearest Republican challenger was John Kasich, who surged back from his dismal Iowa showing to take second in the state, with a healthy 4-point lead over the next pack of Republicans who clumped around the 11- to 12-percent mark. As for the Dems, Sanders led by more than a 20-point margin with 60 percent of the Democratic vote.

On the Democratic ticket, the Hillary Clinton camp must be feeling uneasy. Not only did Sanders win in rural and Western parts of the state (near his home state of Vermont) but also in cities, where minorities are more numerous (although, hey, it is still New Hampshire) and Clinton performed well in 2008. The biggest feat, though, was the support he received from women.

The biggest numbers of support for Sanders came from younger women —as the Gloria Steinem-Madeleine Albright controversy foreshadowed — but Sanders won a majority of support from women 65 and older too, with 55 percent. His support among female voters under 30 was truly staggering: more than 4 in 5 voted for him. Given Clinton's historical support among women, that is cause for worry.

Sanders won almost every other demographic group too — with two exceptions being those 65 and older and those making $200,000 a year or more; they supported Clinton. Fair or not, these are not the groups who will pack a rally with "Feel the Hillary" t-shirts. Clinton also did better with the highly educated — nearly tying Sanders. One potential bright spot in future races may still lie with the minority vote. Clinton received 50 percent of the non-white vote compared with Sanders' 49 percent. In minority-heavy states she will likely be more competitive.

As for the psyche of Democratic voters, the big dividing line seems to come down to trust. Voters who valued trustworthiness and "caring about people like me" the most went for Sanders. About half of Democratic voters only trust Sanders compared with 6 percent who only trust Clinton. Another 39 percent trust them both. Those who value experience and electability more went for Clinton. Another dividing line was the healthcare system with those preferring a single-payer system going for Sanders while those opposed supported Clinton.

On the Republican ticket, the most surprising takeaway is the nearly equal support that Trump received from every group of voters. Regardless of age, sex, education, income, political philosophy, they all supported Trump at levels near or over 30 percent. Self-described moderates voted for him too. As did registered independents. Both households with and without guns. There doesn't seem to be one clear area for one of the more moderate Republican candidates like John Kasich, Jeb Bush, or Marco Rubio to get a foothold.

Those who oppose Trump's plan on banning non-citizen Muslims from entering the U.S. went for Kasich, but they're just 32 percent of Republican voters. Voters who support a path to legal status for immigrants in the country illegally split their support between Trump and Kasich. Trump gained half the vote among those who support deportation.

As for what they're thinking, the main concerns are the economy, government spending, and terrorism. Some 35 percent want a candidate who shares their values (these voters split their support between Kasich and evangelical favorite Ted Cruz). Then 28 percent want a candidate who "can bring needed change" whereas 24 percent wants someone who "tells it like it is." Not surprisingly, the "Tell it like it is" category went to Trump.

That really leaves little space for Trump's challengers and the GOP unless they can consolidate on one establishment candidate. A candidate that could connect with voters values — both religious and political — might be able to give him a real challenge. For the Democrats, Clinton will need to work on connecting with younger voters, particularly young women, if she's going to win the nomination.

Stay tuned for South Carolina and Nevada. The minority-rich states should give us a better picture of what the rest of America is thinking.