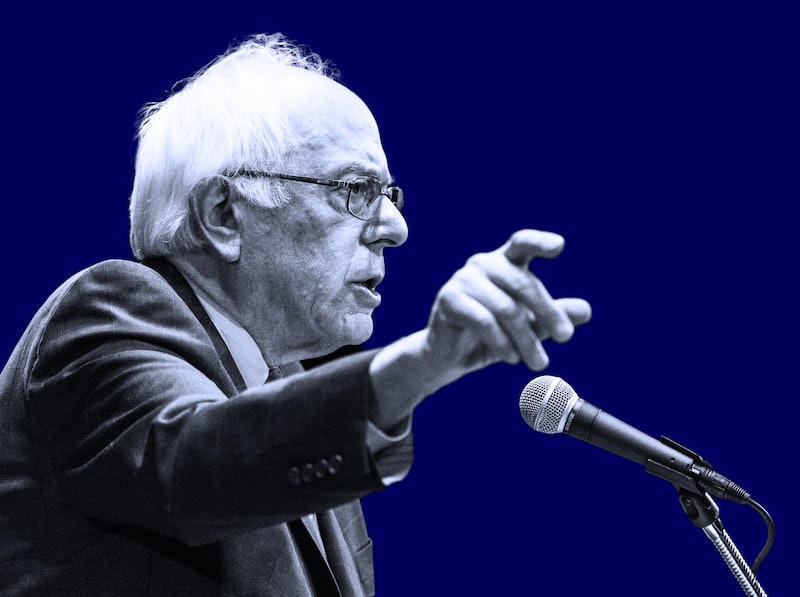 Wednesday was a really good day for feeling the Bern, and not just because the Vermont senator's presidential campaign was fresh off of a resounding victory in the New Hampshire primary. In addition to starting off the day with breakfast with Al Sharpton at Sylvia's Restaurant in Harlem, Bernie Sanders nabbed Ta-Nehisi Coates' vote — and with it, he came markedly closer to stealing a Democratic demographic once thought to be Hillary Clinton's domain. Democracy Now!'s Amy Goodman broke the news that The Atlantic national correspondent and civil rights activist had decided to throw his support behind Senator. During his interview with Goodman, Coates revealed —after prefacing that he "tried to avoid this question — that "yes, I will be voting for Senator Sanders."

News that Coates' would be voting for Sanders quickly made waves across the web, in no small part because Coates had been openly critically of the senator. Just last month in The Atlantic, Coates attacked Sanders for not supporting slavery reparations. "Unfortunately, Sanders’s radicalism has failed in the ancient fight against white supremacy," Coates wrote, sharply denouncing Sanders' focus on what he called "class first" policies rather than ones specifically for advancing the black community. Coates criticized Sanders' proposals, saying even his most socially progressive measures would not do enough to sufficiently help the African American community, writing that "raising the minimum wage doesn’t really address the fact that black men without criminal records have about the same shot at low-wage work as white men with them; nor can making college free address the wage gap between black and white graduates."

Coates didn't withdraw these criticisms of the Vermont senator, but he made it clear to Goodman that he believed that Sanders had earned his vote:

One can say Senator Sanders should have more explicit antiracist policy within his racial justice platform, not just more general stuff, and still cast a vote for Senator Sanders and still feel that Senator Sanders is the best option that we have in the race. But just because that’s who you’re going to vote for doesn’t mean you then have to agree with everything they say.

As good as this announcement was for Sanders' campaign, it's was as bad for Clinton's. Hitting the news cycle the same day as his well-publicized breakfast with Sharpton was a perfect combination for Sanders to make it very clear that he would — and, quite adeptly, could — steal Clinton's status as the Democratic candidate for minority voters. Sanders' win in New Hampshire and "virtual tie" in Iowa had been qualified by some analysts who noted those states were predominantly white. Clinton has tended to poll much better than Sanders when it comes to minority voters, a significant demographic for winning the Democratic nomination.

But just as Sanders has successfully challenged what was initially considered Clinton's indisputable status as the choice among women, he could overtake, or at least take away some of, Clinton's popularity among voters of color. His campaign has hardly been subtle about its desire to win over this demographic. On Thursday, the Sanders campaign proudly touted a video endorsement from singer and civil rights activist Harry Belafonte.

Although Sanders met with Sharpton, the latter declined to publicly endorse the Democratic candidate for the time being. Coates is also far from stumping for Sanders, making it very clear that he wouldn't consider his announcement an endorsement.

No doubt, Sanders will have to do quite a bit more work to rival Clinton's strong support from the African American community. Clinton's campaign announced earlier this month that she had earned the support of more than 170 African American female leaders across a variety of fields, from Sybrina Fulton, the mother of Trayvon Martin, to executive producer Shonda Rhimes. On Thursday, the Congressional Black Caucus political action committee endorsed Clinton, a mark of approval that undoubtedly trumps Coates' vote (and non-endorsement) for Sanders.

Still, Sanders is making inroads with the African American community with a force and level of success that few would have anticipated months ago. Then again, the same could be said of his entire campaign for the presidency.

Correction: An earlier version of this article misstated the Congressional Black Caucus as endorsing Hillary Clinton. Bustle regrets this error.