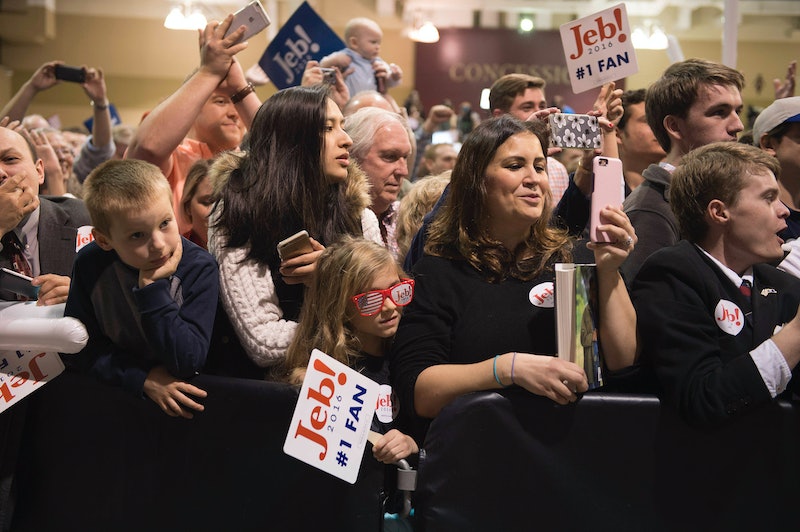 Because the statewide winner will earn 29 delegates, there's a lot at stake at the primary. Per usual, Donald Trump led the polls in South Carolina, trailed by Ted Cruz and Marco Rubio. Whoever emerges the front-runner could have a leg up on the other candidates after the delegate distribution, especially heading into Super Tuesday in March, where they will receive even more delegates. In an attempt to gain voters' support, Republican candidates cried "dirty politics" and attacked their opponents, specifically Ted Cruz, for being liars. After launching a somewhat successful smear campaign, the candidates spent the day before the South Carolina primary touting their accomplishments on Twitter and holding last-minute rallies.

On the day before the state's primary, Rubio took time out of his busy schedule to take photos with his endearing micro-supporters. With less than 24 hours until voting, Rubio held four rallies around the Palmetto State to garner the support of any remaining undecided voters. Rubio advocated for his "rock solid conservative record," which protesters criticized in New Hampshire, and his plans on how he will defeat Hillary Clinton — his campaign's presumed opponent — in November.

His winning strategy, though, was to sell his ability to carry himself through the race until he makes it to the White House, aka he focused on his "Marcomentum" and retweeted young supporters who believed in his trajectory.

Typically when people think of a leader, they think of someone with a loud, boisterous voice. However, Carson stands behind his soft-spoken ways and denies being low-energy. In the hours leading up to the ever-important South Carolina primary, Carson reminded voters why he would be a great leader and how he will champion the rights of all people. In an attempt to connect with different groups of people, Carson spoke with veterans in North Charleston on the day before the primary.

In a strange turn of events, Trump actually went sort of MIA on social media (specifically Twitter) on the day before the South Carolina primary. At this point, "Twitter rant" is synonymous with Trump's campaign, so it was unlike The Donald not to share his every thought with the clock running out until Southern voters made their decision. However, Trump clarified to his Facebook followers that he is self-funding his campaign, and "from these polls, the people of South Carolina understand that!!!"

Although Trump was less vocal on social media before the primary, he created his infrequent posts wisely; in the afternoon, Trump addressed the Pope conflict and strategically re-posted Evangelist Franklin Graham's post supporting Trump's national security position in light of the papal conflict.

Canvassing — going door to door to convince residents to vote for your candidate — is an integral part of gaining support, especially before a primary. On the South Carolina primary eve, Kasich's campaign increased its canvassing efforts in hopes of coming out with another second-place finish like he did in New Hampshire. Kasich also held a town hall in Columbia, South Carolina, where he reminded voters how he will get the economy back on track. Oh yeah, and Kasich posted the perfect Captain America GIF, because 'Merica.

Although Trump likes to criticize Bush for being "low energy," Bush used the day before the Palmetto State primary to show that he is a strong, independent leader who doesn't need Trump. He made clear that he will "hold the government and employees accountable" when it comes to veterans affairs. Also, what's a strong leader without a strong military? Bush touted his master plan for a military to keep us (and our children) safe and secure.

They say history repeats itself, and that was true on the South Carolina primary's eve when Cruz hung out with Phil Robertson of Duck Dynasty, just as he spent Iowa Caucus eve. Surprisingly, Cruz didn't spend a lot of time advocating for his presidential plans or making his case for the next POTUS. Instead, he encouraged people to #ChooseCruz through promotional videos. Cruz made a small mention of that whole lawsuit thing — a Chicago judge heard the case on Cruz vs. qualifying for being president. But even on the day before the South Carolina primary, Cruz still referred to the whole birther ordeal as frivolous and shared that frivolity with Facebook.