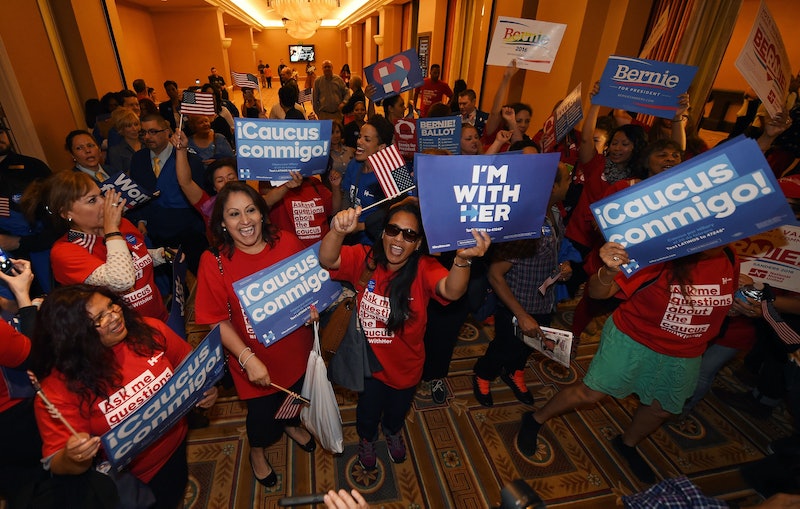 First things first, entrance poll numbers aren't always totally reliable. The numbers that you see come from very small sample sizes, and can change drastically as more information comes in. But with Saturday's Nevada caucus as close as it is, the entrance poll results are all we'll likely see for a while. Hillary Clinton and Bernie Sanders were almost in a deadlock heading into the caucus, and the information that we've got so far doesn't really cut a clear path for either of the candidates. Still, it gives us a few clues about what to look for as the official caucus results come in.

One of the most striking things is the surge of newcomers. According to ABC, two-thirds of the people that they polled were participating in the Nevada Democratic caucus for the first time, which could signal good news for Sanders. More good news for Sanders: 70 percent of the people polled identified as liberal or very liberal. Only 27 percent of the people polled identified as moderate, and 3 percent of people, who must have gotten lost, considered themselves conservatives. This is a huge departure from the 2008 caucus, in which Democratic and moderate voters turned out almost in equal measures. The strong liberal support and the surge of new participants could mean that the many people who showed up to the caucus are #FeelingtheBern.

Three-quarters of caucus goers under the age of 45, unsurprisingly, were Bernie supporters. Clinton has a handy lead among those 45 and older, however, and that represents nearly 70 percent of the people who turned out at the caucus. There is also a gender gap between the two candidates, with more men supporting Sanders and more women supporting Clinton (oh, I can already here the conservative pundits).

Nevada also has a significant minority turnout, the first in the Democratic primary and caucus schedule. Again, this is good news for Clinton, who tends to poll better among non-whites. Still, it's unclear at this point if that will hold true in Nevada. Clinton handily won the Latino voters in Nevada when she faced off against Obama in 2008.

Still, the numbers won't be completely convincing until the Clark County numbers come in. In 2008, 71 percent of the voters in Nevada came from there, so it tends to be a stronghold in terms of turnout. So far, it's looking good for Clinton in Clark County, but as with all things in this election it's still completely unpredictable.