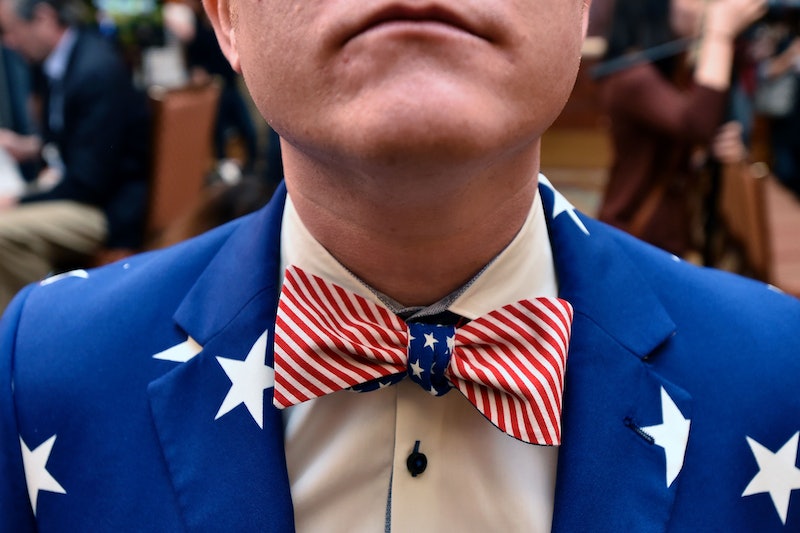 This time last year, if you follow politics at all, you probably would have predicted that former Secretary of State Hillary Clinton would win Democratic caucuses in Iowa and New Hampshire. On the flip side, you probably wouldn't have put outspoken business tycoon Donald Trump at the number one spot on your Republican bracket. The current election cycle has been one of the most talked-about races yet, but it's far from over. With the early states out of the way and the field of candidates shrinking, the 2016 election is likely to get even more interesting.

On Saturday, Trump firmly solidified his lead in the Republican race for the presidential nomination by winning South Carolina's GOP primary and taking home all 50 delegates up for grabs in the state. That same day, Clinton reignited her campaign's credibility by winning Nevada's Democratic caucus. Next, the Republicans will focus on Nevada, where the GOP caucus will take place on Tuesday. Democrats will focus on South Carolina, where the left's primary will take place on Saturday.

Technically, it's still anybody's race. Plenty of delegates are still on the table, and the so-called "Super Tuesday" primaries have yet to take place. As the nominating conventions inch closer, the competition among the candidates will likely get even more fierce — and the results could get even more unpredictable. Here's why:

1. The Early Primaries Are (Almost) Over

When it comes to presidential primaries, states like Iowa and New Hampshire often get most of the attention. Pollsters, pundits, and campaigns analyze these early states to death, leaving other states practically a mystery to the general public. Now that the early states are almost finished with their primaries and caucuses, the remaining states will have their chance to chime in.

On Super Tuesday (aka March 1), for instance, about 24 percent of Republican delegates and 21 percent of Democratic delegates will be awarded for primaries in states like Texas, Virginia, and Georgia. There are far fewer polls focused on these states individually than on states like Iowa and New Hampshire, which means that it's mostly unclear who will come out victorious in the bulk of the country.

As the results of the GOP's South Carolina primary rolled in on Saturday night, former Florida Gov. Jeb Bush, who was once favored to win the party's nomination, removed himself from the race. He recorded disappointing finishes in the early primary states and many of his financial supporters seemed to be losing faith in his campaign. Bush was a not unexpected but still very significant loss to the Republican race: If a name like Bush (and the money that comes with it) can't help you beat Trump, what will? Bush will now be able to endorse another candidate, a move that could boost someone in the so-called "establishment" lane of the race, which has so far struggled to out-perform Trump and Texas Sen. Ted Cruz.

Despite finishing even lower in the rankings than Bush in South Carolina, Ohio Gov. John Kasich and retired neurosurgeon Ben Carson have vowed to continue campaigning — at least, for now. The fact that they're hanging on isn't interesting because there's a huge potential for either of them to make a comeback. Rather, it's interesting because they could be making it more difficult for the stronger candidates — Trump, Cruz, and Rubio — to collect a majority of the vote. (Trump doesn't seem to be having this problem, but Rubio could probably use an outright win soon to validate his campaign.)

The Democratic side of the race still seems very close. Clinton has won both the Iowa and Nevada caucuses, but Sanders pulled off a win in New Hampshire. What these results have revealed is more than just a statistically close race: They've shown, perhaps more clearly than on the Republican side, who is voting for whom.

Young voters and women are overwhelmingly supporting Sanders, two groups that Clinton has traditionally catered to. At the same time, the Nevada caucus revealed that Clinton had firm support from minority voters, another important voting bloc for the Dems. Should these divides persist, they could impact not just the winner of the nomination, but also the narrative that each candidate uses throughout the remainder of the race.

5. A Winner-Take-All System Is On The Way

Currently, candidates can earn delegates even if they don't win a state's primary or caucus. (If you have no idea what I mean by "delegates," see this guide to the nominating process.) In the beginning of the primary process, states have a lot of control over how they allocate delegates. For instance, in the South Carolina GOP primary, the candidate with the most votes automatically won 29 of the state's 50 Republican delegates. After that, delegates were awarded based on which candidate won each district. Ultimately, Trump won all 50 delegates in a landslide victory, but had Rubio won a district or two, he could have also picked up delegates without winning the state overall. In fact, Rubio has some delegates in his pocket already from other states, even though he hasn't won a single state outright.

On March 15, the Republican Party will begin allowing states to allocate delegates on a winner-take-all basis. Although some proportionally based distribution will continue, the system shifts to favor primary winners more strongly. That could present underdogs like Rubio a chance to make a comeback if Trump's lead begins to crumble.

The race for the White House is rarely cut and dry. After all, the American political process was designed intentionally complex. This time around, it seems that it's not just the process, but also the people in the race who are making it all the more chaotic. As more and more states head to the polls, there's more pressure and more opportunities for candidates themselves to make things interesting.