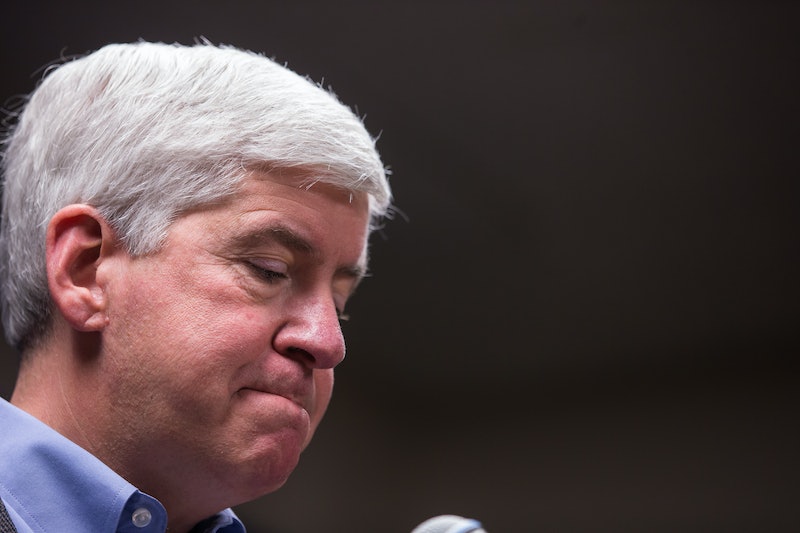 Shortly after news broke that a gunman in Kalamazoo County had gone on a fatal shooting spree Saturday evening, killing at least six people and severely injured two others, social media exploded with expressions of disbelief, compassion, and outrage. As more and more information trickled in from police throughout the night a tragic picture of senseless violence took form. Reactions to the Kalamazoo shooting — whether they came from local residents or Michigan politicians — all contained sentiments of shock and sympathy.

Support for the city of Kalamazoo and the victims of Saturday's shooting spree has swollen across the country as investigators continue to attempt to answer the question on everyone's mind: Why? Although the suspect was apprehended a few hours after the shootings began, officials have yet to uncover any clear reasoning behind the suspect's motive for shooting at eight people in three seemingly random locations around town. One woman was shot while standing in the parking lot of an apartment complex around 6 p.m., roughly four hours later two men were gunned down at a Kia dealership and another five people were shot at outside of a Cracker Barrel restaurant minutes after that.

With the national spotlight turned on Kalamazoo, state officials and renown Michiganians took to social media to express condolences to victims' families and gratitude for the local authorities involved.

Kalamazoo Mayor Bobby J. Hopewell took to his official Twitter account late Saturday to express his sadness at the night's "heinous act." In two tweets published less than an hour apart, Hopewell asked his followers to pray for the victims and their families and expressed his pride in how Kalamazoo Public Safety personnel and Michigan State Police had handled the incident.

Michigan Gov. Rick Snyder took to Twitter to publicly thank the state's law enforcement agencies for what he called "a quick arrest." In a Facebook post later that day, Snyder said he had personally thanked those involved for their "outstanding coordination and skill in quickly arresting a suspect." In a separate post announcing the flags at the state capitol to be lowered to half-staff for six days in honor of the victims, Snyder said, "It's a very sad day in Kalamazoo." The governor offered his condolences and support to the families of two hospitalized victims, whom he met with Sunday.

Kalamazoo City Commissioner Shannon Sykes expressed her gratitude for authorities' response and condemned Saturday's shooting as "an act of terrorism" in a Facebook post published Sunday. "Last night was incredibly long ... Make no mistake, this was an act of terrorism. What we all felt last night waiting on an arrest was terror." Sykes urged residents to respond with love and action, asking them to support each other and the families of the victims "Let us show anyone who would seek to terrify and paralyze us, exactly what Kalamazoo is made of."

Fellow City Commissioner Erin Knott called for elected officials to pass gun control legislation to protect communities like Kalamazoo in her own Facebook post Sunday, saying, "last evening while Kalamazoo was terrorized, I attended a church auction/fundraiser and watched people gleefully bidding on two hand guns. I will never understand our nation's obsession with guns."

Many of Michigan's state senators expressed their shock and sadness regarding the Kalamazoo shooting over Twitter in the hours following the suspect's arrest, including senators Gary Peters, John Proos, and Debbie Stabenow. In one of two tweets, Stabenow described Saturday's shooting as an "outrageous and horrible act of violence"

Miami Dolphins wide receiver Greg Jennings, who calls Kalamazoo his hometown, asked for fans to pray for "his city" in a tweet published late Saturday night. Jennings was born and raised in Kalamazoo, attending Kalamazoo Central High School before heading off to play football for Western Michigan University and landing an NFL career.

Confirmation of the shooter's affiliation with Uber spurred the company into quickly releasing a statement expressing their horror at the incident. The company's chief security officer, Joe Sullivan, said Uber had "reached out to the police to help with their investigation in any way that we can."

There will likely never come a point in time when seemingly senseless acts of violence are completely understood, but in times of tragedy like that experienced in Kalamazoo, comfort is often found in the support and compassion of our neighbors and civic leaders.