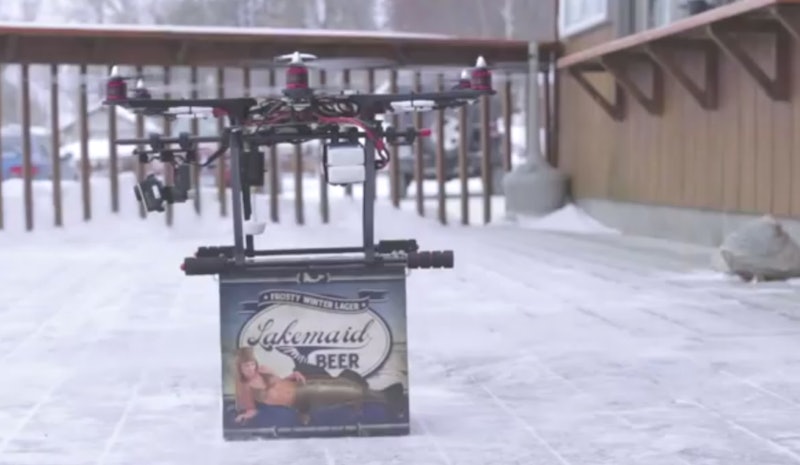 If you're an ice fisherman in Minnesota or just someone who really likes the idea of beer being delivered by drone to your Super Bowl party, get ready to be disappointed. The craft beer company Lakemaid has been told by the FAA that their drone delivery plans can't move forward. The brewer's idea to deliver beer via drone was inspired by Amazon's drone delivery plans, and seemed like it would be perfect for local ice fishermen. After all, they already know their GPS coordinates, and they probably don't want to trek all the way back into town if they run out of beer.

Lakemaid video taped a test flight of their prospective system in which a drone successfully delivered a six pack to an ice fishing hut, and the promotional video went viral. Soon after, Lakemaid received notice from the FAA that commercial use of drones is still prohibited in the United States. So there goes that idea.

Still, it's a shame; drone beer delivery might just be the first use of drones I could actually support.

The future of drones in the U.S. is obviously uncertain. Despite Amazon CEO Jeff Bezos's confident announcement that the online giant would soon be making drone deliveries, there are plenty of groups that would like the ban on drones to stay in place. Civil Liberties groups worry about drones being used to spy on citizens, and the good citizens of Deer Trail, Colorado have even tried to pass a law allowing people with a "drone hunting license" to shoot down drones. Still, it's hard to object to a drone that brings you beer.

Lakemaid's president Jack Supple says that the company is still looking to scout out some drone ports around Minnesota lakes that the company can use if ever the commercial ban is lifted. If they ever get the chance to deploy it, apparently it will work something like this: