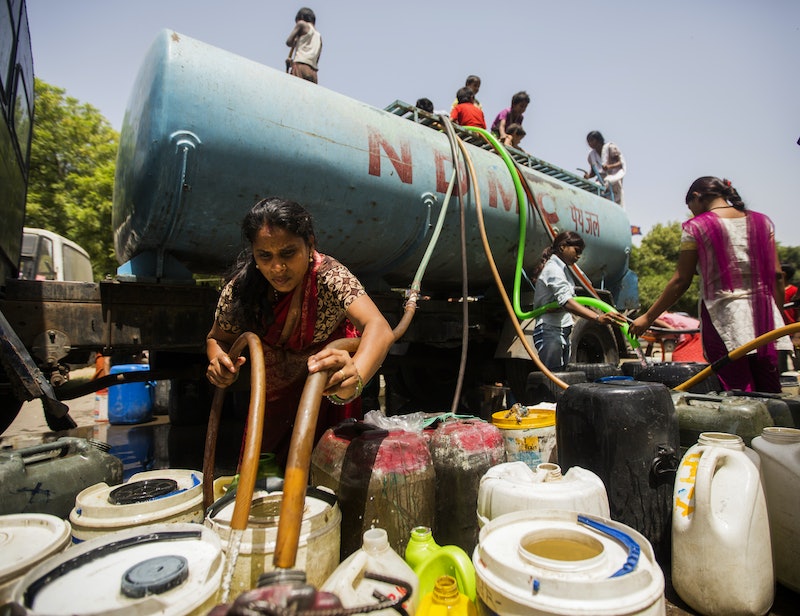 Recent protests by the Jat community created an unexpected water shortage in India's capital, New Delhi, when the violent demonstrations shut down a major canal that supplies water to the city. While Delhi authorities have reported that shortages had not become widespread as of Monday, the crisis in India echoes the need for more comprehensive water planning in cities everywhere. Stateside, Americans experienced this same realization weeks ago when it was revealed that residents of one Michigan town were drinking lead-contaminated water for close to a year. So here's the lowdown on how to help improve access to clean water during emergency situations around the globe.

It should first be noted that access to clean water is a critical problem in a number of regions around the world, and oftentimes, it's a constant reality for massive numbers of people as opposed to a temporary emergency. More than 660 million people lack access to safe water, according to the World Health Organization and UNICEF. That comes to approximately one out of every 10 people in the world. In these areas where clean water is not easy to obtain, the emergency does not last several days or weeks, but can surpass lifetimes.

Unexpected crises, however, can have tremendous negative impacts on communities regardless of how much water was available prior to an incident. In its 2009 report on the right to water and sanitation in emergencies, humanitarian organization Action Against Hunger stated that "the risk of disease and death caused by dirty water and unhygienic environments is considerably heightened in emergency situations." The WHO, in a 2011 publication, explained that insufficient water and consumption of contaminated water are usually "the first and main causes of ill health" to affect communities during and after a disaster or emergency.

In Haiti, where more than a third of the country's residents lacked access to safe water prior to the 2010 earthquake, the devastating disaster forced that number to exponentially grow. And in a city like Flint, neglecting to prioritize the health of residents can lead to illness for hundreds or even thousands.

The best ways to get involved in ensuring communities have access to this basic necessity, no matter what's happening in their environments, is to follow and support actions of organizations that focus on providing basic needs during disasters.

The Red Cross is about as practiced as it gets when it comes to making sure people have access to necessities, whether the area is facing a natural disaster or experiencing socio-political tumult. The Haitian Red Cross, with help from the organization's global network, trucked clean water to more than 300,000 people in makeshift camps at the peak of its operations following the devastating earthquake that displaced 1.5 million people. In response to post-election violence that internally displaced hundreds of thousands in Kenya, the Kenyan Red Cross helped construct a borehole that yielded 60,000 liters of water each day for thousands of people and livestock in the Kotulo area.

The American National Red Cross encourages getting involved in a number of different ways: direct donations, fundraising, taking a course on emergency preparedness, volunteering with the organization, or showing support for the Red Cross's work on social media.

It's also a good move to keep an eye on any organization that puts water at the heart of its mission. Charity: water is a non-profit organization that focuses on providing clean and safe drinking water to people in developing countries through projects like well-drilling and water purification systems. You can set up a one-time donation or monthly donations to the non-profit. And while the organization generally doesn't direct its attention to disaster management, Chief Global Water Officer Christoph Gorder tells Bustle in an email, that charity: water has gotten involved when an emergency arises. In the case of Nepal, where charity: water has worked since 2010, the organization was there to help in the aftermath of last April's devastating earthquake.

Organizations like charity: water can also be solid resources for finding out the best way to act, even in situations that are outside of their purviews. Though Flint is an American city, the non-profit still responded to citizens' questions during the midwestern city's water crisis and directed folks to organized response efforts, including the Flint Water Response Team and the Flint Water Fund.

If one event in particular stirs in you the impulse to take action, like the current water crisis in New Delhi, reach out to the national divisions for groups like the Red Cross. The Indian Red Cross may begin water deployment, as they did in July following heavy flooding in the state of Tamil Nadu, to provide relief. Authorities on Tuesday said the water shortages could last for up to two weeks.

The South Asian country offers a clear image of the range of water issues facing the global population, with a lack of access to safe water and sanitation and instances of water shortages in urban and rural areas alike. Unexpected crises only further exaggerate what oftentimes seems to be an already insurmountable problem, demonstrating just how urgent the need for improved water disaster management really is. That way, the focus can return as quickly as possible to reducing that number of 660 million to zero.