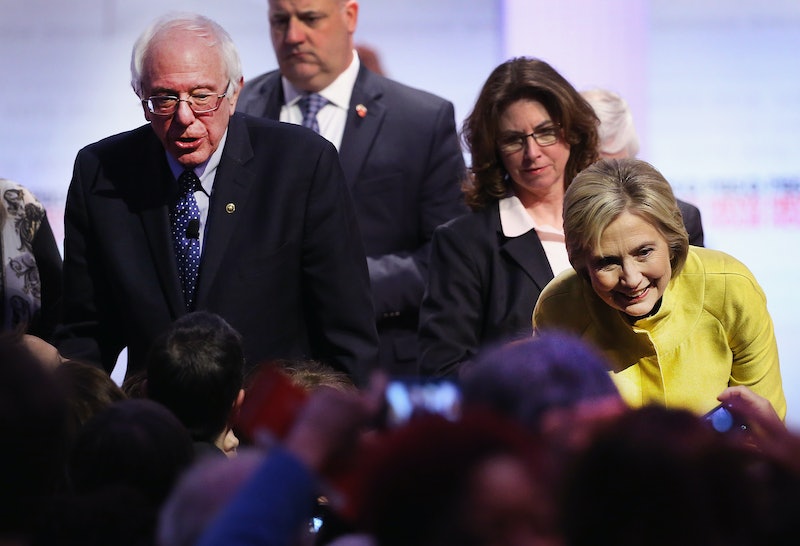 With over a dozen statewide elections being held simultaneously on March 1, Super Tuesday's results will bring the U.S. a gigantic step closer to determining the 2016 Republican and Democratic presidential nominees. For Democratic candidates Hillary Clinton and Bernie Sanders, the day may even prove to be conclusive. But, the population's vote isn't the only factor in the equation — Super Tuesday will also offer over 140 superdelegates who are completely removed from the popular vote and can choose whichever candidate they please. So far, it looks like the majority of them have already selected a side.

Around 712 super delegates will be casting an independent vote that ultimately represents their entire state's population. In total, these super delegates make up about 15 percent of the delegate pool comprised of over 4,000 legislators and prominent party members. And one small note: the Democratic party is alone in exercising this method, which has been criticized for being undemocratic after Sanders, who dominated the vote by over 20 points, virtually tied with Clinton in New Hampshire. Well, votes aren't everything. A handful of super delegates from the state had their eyes on Clinton before the election even kicked off.

With somewhere around 1,000 delegates (the count varies between 974 and 1,004) at stake on Super Tuesday, the biggest election day of the season is do or die for the Democratic candidates. The March 1 delegate group represents about one-fifth of the 4,763 Democratic delegates that will eventually be allocated from all states across the nation. Thus far, Clinton has secured 503 delegates and Sanders has collected 70. The disparity in that ratio is wholly a result of the superdelegates' overwhelming allegiance to Clinton. If the wildcard delegates are left out of the equation, the two candidates' pledged delegate count is Sanders: 51 and Clinton: 52.

After March 1, it's possible that Clinton could win the nomination if Sanders isn't able to attract more superdelegates. To win the Democratic nomination, either candidate must gain the support of 2,383 delegates. So far, Clinton has a lead among superdelegates in the 11 states holding Democratic elections on Super Tuesday. These states include Alabama, Arkansas, Colorado, Georgia, Massachusetts, Minnesota, Oklahoma, Tennessee, Texas, Vermont and Virginia.

Of the 142 or so superdelegates involved, Clinton is projected to hold about 92 of them. Sanders has a chance of winning over superdelegates from states where the ratio of Clinton pledges versus uncommitted delegates is particularly close. Alabama, Arkansas, Oklahoma, Texas, and Vermont, Sanders' home state, are among those yet-to-be-determined states. In a fundraising email, the Vermont Senator expressed how much is truly at stake.

We are in the midst of a stretch where 27 states will vote or caucus as part of the Democratic primary, with over 2,000 delegates up for grabs. It's no exaggeration to say this is the most important stretch of our campaign. If we can keep it up, we are going to win. But we can't stop. Not now. Not when we are so close and with so much on the line.

About 30 percent of the Super Tuesday superdelegate pool remains uncommitted. Less than 10 of them have gone ahead and pledged support for Sanders.