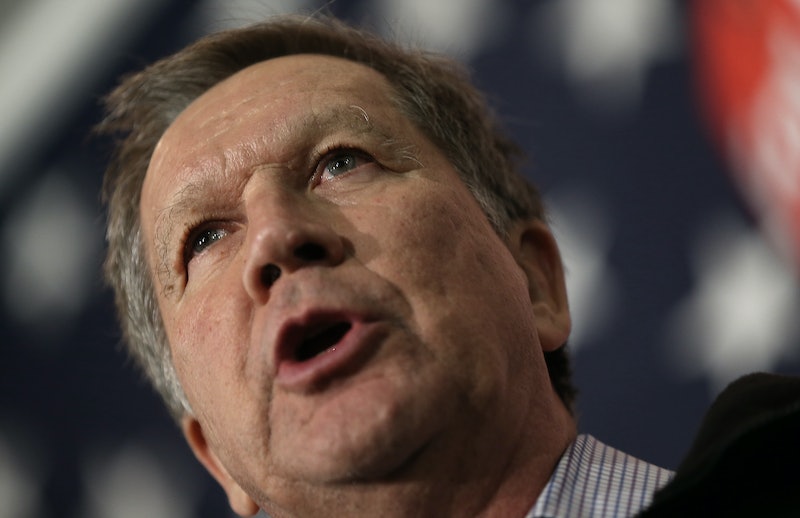 It looks like John Kasich's campaign may be grinding to a halt soon, especially considering that Kasich apparently doesn't think he's supposed to be president. Really. During a town hall meeting in Georgia, the Ohio governor was asked when he was going to live out his purpose and fight for the presidency. However, Kasich, unlike his supporter, didn't seem so sure that he is really meant for the White House:

There are only two ways to spin this quote. Either Kasich is hedging his bets, or he stuck his foot in his mouth. It's possible that Kasich is already changing his rhetoric in anticipation of a dropout after next week's Super Tuesday showdown. He isn't a frontrunner in any of the states that will vote on March 1. While he's still ahead of Ben Carson, the primary season is quickly evolving into a three-man race, with no space for Kasich. By conceding that his candidacy is doomed, Kasich can change the story before he drops out, and leave the race as a humble civil servant — a meek messenger of ideological rationality whom hubristic Americans ignored, rather than just another loser who couldn't cut it in the GOP race.

However, there's the other option to consider as well. Kasich could have just really messed up and unintentionally insinuated that he doesn't belong in the Oval Office. There's precedent for this scenario, too. Kasich is currently under fire for a comment he made at a Virginia rally, when he said that women "left their kitchens" to get him elected to the Ohio State Senate in the '70s.

Kasich's campaign spokesman contended that he meant his statement literally, and that many of his early campaigns were run out of friends' homes. Yet the anti-feminist angle took hold, and protesters showed up at Kasich's speech at Virginia Commonwealth University, sporting signs that said "I left my kitchen to come to this protest." Rhetorically, it hasn't been a great week for him, and it's plausible this was another misstep. In that case, a word of advice to Kasich, and all other presidential candidates: Don't use the words "I," "not," and "president" in the same phrase. Ever.

Whatever Kasich really meant, the story has blown up, and isn't exactly the shining PR moment that he needs to build momentum for next Tuesday. Kasich has come surprisingly far — of all the candidates in the running since the race began, few would have predicted that he would survive this long. Despite his unexpected perseverance, this otherwise-valiant campaign might ultimately fall with the help of some poorly-chosen words.