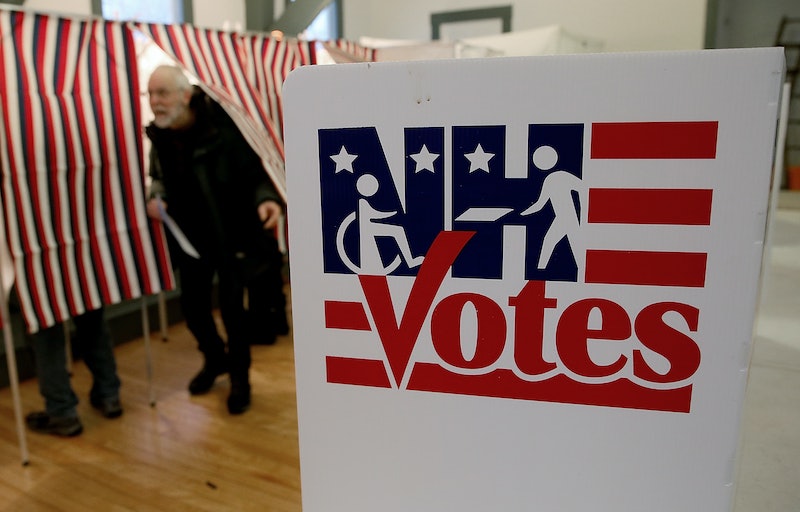 So far, the presidential primaries and caucuses have happened one by one — first in Iowa, then New Hampshire, Nevada, and South Carolina. All of that will change March 1, when 12 states, American Samoa, and Democrats abroad hit the ballot boxes all at once to determine which candidates their states' party delegates will go to. With so many events taking place in one day, it will be a struggle to keep things straight. To make it even more difficult, each state has different voting times, so this primary and caucus schedule for Super Tuesday will help you keep track of what's going down across the country and when to expect results to roll in.

Tuesday will be crucial for both the Republicans and Democrats. On the GOP side, multiple Southern states will determine which of the remaining candidates has the most support in the largely conservative area, giving the winner(s) major momentum. The Texas GOP primary especially will be a contentious battleground for Donald Trump and Ted Cruz, as the results will either verify Trump as the party's frontrunner or show that at least Cruz's home state supports him.

Democratic candidates Bernie Sanders and Hillary Clinton have more to lose (or gain) in East Coast states like Massachusetts and Vermont, where Sanders has the home advantage.

In order to stay sane on Tuesday (or figure out what time you can vote), take a look at the primary and caucus schedule in each Super Tuesday state and territory.

American Samoa Democratic Caucus: TBD (The GOP will not hold a caucus in the territory.)

Colorado Democratic Caucus: Starts at 7 p.m. MT (The GOP will not hold a caucus in the state.)

Although the primary election for Democrats abroad is listed as a Super Tuesday primary, citizens in other countries can vote until March 8. So those results won't be definitive on March 1.