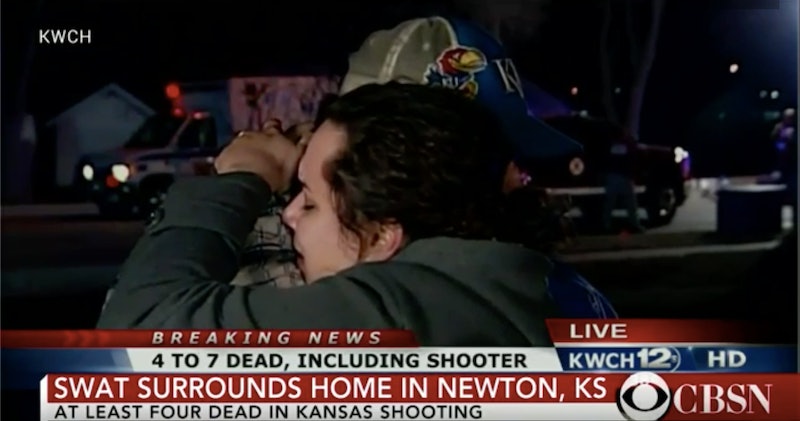 Multiple shootings in Kansas shocked a small community with the sheriff confirming that several people are dead and up to 20 people injured. During a press conference, Harvey County Sheriff T. Walton called the shootings, which ended at lawncare company Excel Industries, a horrible incident, saying, "There's going to be a lot of sad people before this is over." And while the scene was absolutely devastating as relatives and friends waited to hear about their loved ones, there was one touching moment when a husband and wife reunited after the Hesston shooting live on air.

Jennifer Trujillo was giving an interview about her husband, Jared Trujillo, an employee at Excel Industries. She told the reporter that she was able to talk to him, that he said he was OK, though somebody next to him got shot. Then the reporter pointed behind her, and she said, "Oh my god!" Jared walked up to her and they embraced as the camera continued rolling. It's a particularly moving moment — it's hard to imagine what it might feel like to know your loved one had to suffer through a terrifying situation, and the video shows the raw emotion of a touching reunion.

The shootings occurred Thursday afternoon over a period of a couple hours. Walton said there were shootings at two separate intersections, a shooting in the parking lot of Excel Industries, and then a shooting inside the company building. The business, as well as a nearby college, were put on lockdowns, which were later lifted.

Many of the shooting victims were airlifted by helicopter to nearby hospitals. Sheriff Walton, in his press conference, expressed sympathy for those involved and urged friends and family members to try to be patient as information continues to come out. He said:

There have been so many crime scenes and there are so many people. We want to get the people that are so concerned whether their loved ones were shot and killed. ... We want to get everybody identified and are working on that and will get that information out just as soon as we can. I understand how hard it is for everybody.