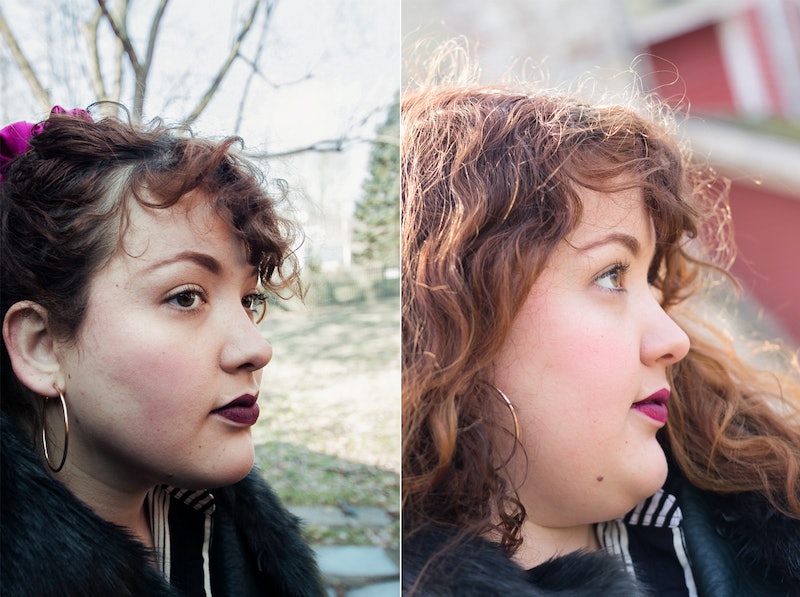 I spend a lot of my time on the internet, where I was first introduced to body- and fat-positive movements and the many inspirational people who work in different facets of them. But oftentimes, I'll finally meet someone in person — be it a blogger I've followed for years or a mainstream plus size model — and we'll both be taken aback by how different we each look in the flesh. Our bodies tend to be at least a little larger or smaller IRL than they typically appear on Instagram.

Even if no Photoshopping (sans minor lighting edits) is involved, photographs (including the photographs we're seeing in the fashion-sphere) can be very easily manipulated. Sometimes it's not even intentional. The camera lens you're using, the way the light catches your chin(s), and the angles in which you tilt and twist your face and body can all affect the way someone looks in a picture.

Before I knew what Photoshop was (and before I discovered the not-often-taught concept of falling in love with your own body), I blindly trusted the imagery I encountered in my magazines. I believed the models on those covers must be just as "perfect" in life as they looked in their photos: As thin, as proportional, as curvy "in the right places," as lacking in the visible belly outline and neck fat departments as one could be. Years later, when I started taking my own photos with the help of my partner slash photographer, I began to see just how straightforward it is to make yourself look thinner or fatter.

In an effort to showcase how simple it is to alter your weight in images with no actual Photoshopping, I partook in a little photoshoot. My partner and I had three lenses at our disposal: The Tamron 10-24mm f/3.5-4.5 SP (a wide angle zoom lens), the Canon efs 18-55mm (a stock Canon Rebel zoom lens), and the Canon EF 50mm f/1.8 II (a prime lens). The former two, we found, narrowed my body significantly, while the latter lens was a little more indicative of real life. I also took out the front-facing camera of my iPhone 6 because smartphones are very likely where most Millennials are taking their selfies.

With the exception of using these different lenses (which I thought was fair since the majority of professional photographers I've met and worked with utilize a variety) and a reflector at times, we didn't do anything except angle my face. Here's how things played out.

People often think that photos taken from above slim you down while photos taken from below make you look plumper. But there are actually a lot more subtleties involved in photo presentation — many of which I'm willing to bet are utilized in fashion photography and mainstream plus size modeling. Real talk: Whenever I've met plus models in person — the same models often critiqued for "not being plus enough" — they are often more fuller-figured than many of their images suggest.

Something as seemingly benign as the position of your tongue inside your mouth can make your double chin more or less visible. And angling your face so that it's resting a little on your side (as I did in the photo on the right) will push your lovely chunks into full view, while sticking your face in the air ever-so-slightly (see: left photo) will elongate it. Same person, different angles.

I love all of my chins equally, but I know folks who go into panic mode at the slightest photographic evidence of having more than one. Along with all types of fat, we've been conditioned to believe double chins are up there with non-flat stomachs and cellulite-y thighs on the list of "features to avoid at all costs."

In the "thin" image above, you'd hardly know I have chin and neck fat. And all it took was stretching my neck out a bit so that there was more distance between it and the rest of my face. In the right photo, I'm intentionally pushing my face inwards towards my neck so that all the fat is more visible. I took inspiration from a game created by a group of girls in my high school PE class. They, too, pushed their faces into the necks to determine who had the most hidden fat. Whoever "looked the least obese" won the round. But all I could notice at the time was the fact that despite all of them being incredibly thin, every single one had fat under there.

In the photo on the left, my neck and second chin are slightly concealed by my coat because sometimes all it takes to manipulate an image is to burrow yourself inside a bunch of fur. Additionally, I angled my face so that it was almost parallel to the camera with my neck elongated yet again to create the illusion of a jaw line. This was actually shot from a low angle, yet the effect wasn't automatically a "fattening" one.

On the right, I am rolling with those wobbly bits. With my jacket open and my face in almost-full-frontal mode, you can see the many layers of it. Plus, my head it tilted back rather than down, making whatever is happening under the chins all the more visible.

There's a lot to be said for angling your head downwards into a camera in such a way that'll make your eyes look further apart and your jaw very pointedly defined. For this "thin" image, I widened my eyes, put my tongue at the roof of my mouth, elongated my neck, and stuck said elongated neck even more outwards to create more distance between it and my chins.

As for the second image, this is pretty much how I'd look to most passerby who saw me from a very straight-on distance. There's no angling or tongue tricks. It's just a candid shot of a happy fat girl.

Believe it or not, hardly anything was different in terms of how I angled my face for these two, which is proof of just how different two lenses can be from one another. For the first couple of years of my life as a blogger, I was using the lens that I took the above "thin" photo with. Unbeknownst to old me, a ton of lenses narrow your face and body. They're not marketed as "make me thinner" cameras or anything like that. But it happens.

Other than the equipment being different, my head was pushed outwards to achieve the thinner, wild-eyed look, while the fat picture is just a pretty honest representation of me being fat.

I'm convinced that models in fashion photography suck in their cheeks more often than we think. It makes it incredibly hard to smile, but tons of models never seem to smile in their photos anyway.

Oh, it all makes sense now.

And here is me letting loose. The left image is just about the perfect example of what happens when you shoot from high, high above. It would seem the higher the camera, the less visible fat on the face. So please don't trust aerial photography too much, y'all.

Turning to Fat-Grinning-Me, you know how I said people often think photos taken from above always make you look thinner? Sometimes it's not even about how high or low down the camera is in relation to your face. Sometimes it's just about how much you push your chins into your neck so that all the chunky bits basically blend into one. Both of these were actually taken while my partner stood on a step ladder.

Whenever I talk to true selfie aficionados, they usually site their main attraction to this version of self-portraiture as coming down to the ability to control your image. The thing about having full control of your image in a camera, however, is that it also makes it easier to control how slender or plus size you look. I'm not saying this is good or bad. Every individual has the right to choose how they present. I'm just saying that selfies give us plenty of opportunities to look, well, not-how-we-really-look.

With a simple twist of my head in the second image here, the chunkiness of my face is more apparent than in a straighter-facing shot.

Although both of these were taken from the "dreaded" low angle positioning that so many people hate because, "Ew, double chins," one is clearly slimmer-looking than the other. The main difference? How off-center my actual face was in relation to the lens. Slightly more straight-on shots like the right photo, in my experience, tend to offer a more realistic representation of how people look when you're staring directly at them.

Logic would dictate that the closer you are to a camera, the less of your body will be in clear view. When you see images of models' faces in which said faces look long and void of any kind of lovely lardy bits, just remember they probably do have lardy bits. They just aren't visible in the camera.

In the left picture, I'm chilling inside my coat so you can't see how fat my face is. A pouty lip also tends to slim down your cheeks. Perhaps another reason so many runway models pout...

The right photo is what I look like whenever I'm lightly smiling and my head isn't tilted up as though I'm hoping to find something super fascinating on the ceiling of my office building.

So What Does This Really Prove?

I'm not sharing these images and methods for slimming versus fattening so people can read and proceed to slenderize their photos. My goal is quite the opposite.

Personally, I never strive to look smaller in my pictures, because I believe the imagery we consume and allow others to consume should be as honest and realistic as possible. If that were the case in mainstream media, in fashion editorials, and in ad campaigns, I'm sure most of us would grow up with a wider understanding of the many ways there are to exist as an individual in this world.

The concept of "one ideal body type" would perhaps cease to be relevant, and more kids would grow up recognizing that most people have some kind of unique pocket of fat on their bodies. Maybe we'd even get over this idea of "the aspirational plus size body," whereby a woman is a perfect hourglass shape, with no fat that actually jiggles outside of her chest and bum. Most plus size women have visible fat and double chins and neck chunks and wobbly tummies. And most women, of all sizes, have fat somewhere on their body.

I understand that it's almost impossible to know for sure whose images are being manipulated and whose aren't, but that's why I think it's incredibly important to take everything we see online or in magazines with a grain of salt. Remember that it's part of a model's job to "know her angles." Remember that the photographer could be using any myriad of lenses. Remember that the Internet is curated by people, and people lie. Remember that you have the right to present yourself and your image however you so please, but that the more honest you are about how you look, the more relatable you become to people with similar bodies to your own.

When it comes to plus size imagery (or imagery that represents any kind of marginalized body type), I think it's all the more crucial to be as real as possible. Fatness is amongst the characteristics most stigmatized in contemporary culture. And I don't believe it can ever be de-stigmatized unless it's first normalized. To normalize it? Well, we need to see it. So please: Try not to hide those chins.