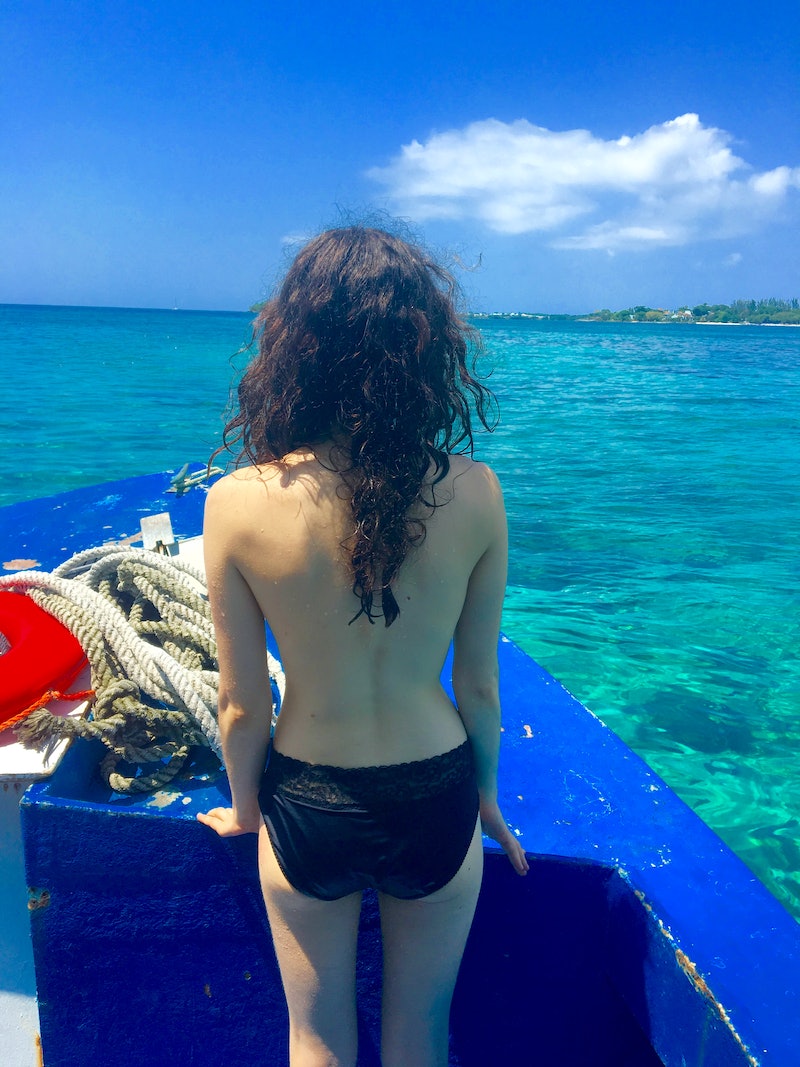 When I tested out my first pair of THINX period-proof underwear as part of a menstrual hygiene product experiment for Bustle last year, I became an immediate convert. I had no idea that being on the rag could feel so little like ... well, being on the rag. With period panties, I didn't have to worry about leaks or wetness — ever — and I always felt like I had the option to free-bleed if that was what I was in the mood for. It was a liberating game-changer.

I bought a second pair, but quickly found that it wasn't enough. I was doing extra laundry just to be able to reuse them during the rest of the week. So a few months ago, I decided to invest in buying myself a full week's worth of period panties, bringing me to seven pairs in total. With the 15-percent discount for buying five pairs of THINX hiphuggers at once, it cost $144.50. That's way more than I normally spend on underwear — or any clothing, frankly — but it was one of the best investments I've ever made.

In fact, it's improved my quality of life so much that I actually feel compelled to convince other women to give period-proof underwear a try. Our level of comfort matters as we move through the world; sometimes, you don't realize just how much until you feel empowered by the absence of discomfort. In fact, whether it be bras, underwear, shoes, or anything else we wear, I believe comfort is a feminist issue.

While there are lots of other good period panty companies out there, I'm recommending THINX because they're the only ones I needed to try before I was sold. (And no, THINX is not paying me or Bustle to say this — not even in free panties.) Here are seven reasons I'm glad I invested in seven days' worth of period-proof panties.

1. I Can Free-Bleed Without Feeling Wet

This is, hands down, the best thing about period underwear. I can free-bleed without feeling wet in the slightest. Even on my heaviest days, I can wear this underwear for at least eight hours before I start to feel wet or smell anything. I usually wear them with a menstrual cup or tampon on my heaviest days to stay totally dry, and without any backup on the first and last days of my period.

As a result, I'm contributing far less waste to both the environment and my pocketbook in the long run, and I get to worry less. They'll pay for themselves in a year in saved tampon costs alone.

2. I Don't Have To Deal With Having A Dry Or Sore Vag On Light Days

You know that feeling toward the end of your period when you're still bleeding too much to only wear a pantyliner, but your vag is also kind of sick of your tampons or menstrual cup and just feels like it needs a break from having stuff in it? Or when you're just not bleeding heavily enough and are stuck in that weird middle ground of Half-Dry Tampon Land?

Enter period panties. On those first and last days, they keep me dry and protected, and I can even wear them a full 24 hours without feeling any wetness or smelling anything. What is this sorcery?! I don't know, but whatever it is, I love it. No more sticking something up me unless I genuinely want to, and no more awkward, itchy pantyliners or pads. Just normal, sexy underwear. Which brings me to how ...

3. They Actually Feel Sexier Than My Normal Underwear

Maybe I need to upgrade the rest of my underwear, but I genuinely feel like these are the cutest panties I own. They look good, they feel tight but not restrictive, and they're comfortable as hell. I sort of explain it to my friends as a cross between really soft, fancy underwear and a swimsuit bottom. You get that stretchy, extra-protected, athletic feeling, but they're also light and comfortable enough that they don't feel like anything you want to take off when you get home. The lace trim up-top is cute but not scratchy, and the cheeky-cut is so downright sexy that I even wear them sometimes when I'm not on my period.

I'm also a big fan of period sex, and wearing these panties makes me feel up for it even more often. Because my vagina isn't sore and I feel fresh, I'm even more ready to go when I'm wearing them — maybe especially because I just think I look hella cute in them.

4. They Make Me Feel Like My Period Is More Of A Special Occasion

When I know my period is coming, I make sure all my period panties are clean and ready to go (because I sometimes wear them during the rest of the month, and not because I only do laundry once a month, I swear). When my period comes, I slip them on and feel an added layer of special security.

I like to take extra care to pamper myself when I'm bleeding, and wearing period panties has become a part of that ritual. It's my Special Lady Week, and now, instead of that being celebrated with stained, old undies, it's marked by slipping on something that makes me feel like I'm on the cutting edge. They feel (and were) expensive, and every month, I'm reminded of the smart investment I made and feel like a grown-ass woman.

I don't know about you, but I never really liked wearing tampons to sleep. I did anyway, though, because I liked wearing pads even less, and would leak if I only wore a pantyliner. But in the morning, I would often pull out a half-dry tampon and worry not only about toxic shock, but also about just having something in my vagina when I didn't fully want or need it there. Laying horizontally, I just don't tend to bleed as much overnight — but I definitely leak from all that tossing and turning.

Now I just wear THINX to sleep, and no matter how heavy my flow is, not once have I leaked overnight or felt wet. I even sleep better.

6. They Can Double As Swimsuit Bottoms

Last month, I was on the last day of my period when I had an opportunity to go snorkeling in Jamaica, because life is awesome sometimes. I was only wearing my THINX, and I was confident that they would hold up just fine. I was right. While they're neither marketed nor intended as swimsuit bottoms, I was totally comfortable wearing them that way. Even drenched, there was no pad effect, and because they dry so well, I was even more comfortable wearing them before I went to take a shower and change.

7. I Feel Good About Where My Money Is Going

Like I said, wearing period panties has cut down on the amount of other disposable products I'm buying. Often, I'll just wear a menstrual cup and/or the panties now, which means I'm not contributing to menstrual hygiene waste whatsoever and am saving money in the long term.

Beyond that, it's important to me to know that my clothing is ethically manufactured, and I know this underwear is. Plus, for every pair you buy, THINX donates to the charity AFRIpads, which teaches women in Africa to sew and sell washable, reusable cloth pads, with a focus on empowering entrepreneurship. I also just like this company's style — it's owned and run by women, their ad campaigns are on point, and they're busting period stigma every chance they get. (They've even put up ads this week in New York City featuring period underwear that's designed with trans men in mind. Seeing those in person at Union Square is actually what inspired me to write this.)

So when I went for the splurge of buying five pairs at once, I knew that I was also helping an organization and cause I care about deeply. If you can afford it, consider the investment you're making. The upfront costs are higher, but the money you'll end up saving in stained underwear and tampons will be cancelled out in a matter of months.

More like this
How To Politely Reject Someone Who Keeps Asking You Out
By Laken Howard and Lexi Inks
Kim Kardashian Reveals Her Response To Kanye’s Fashion Opinions
By Jake Viswanath
6 Dating App Tips To Try If You're Looking For A Serious Relationship
By Lexi Inks
21 Signs You're Not In Love Anymore
By Sara Altschule, Kathleen Ferraro and Carolyn Steber
Get Even More From Bustle — Sign Up For The Newsletter