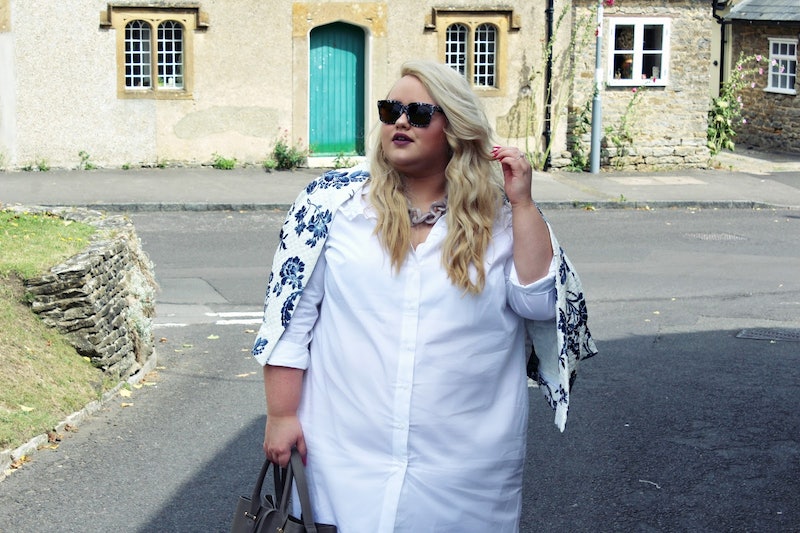 Twitter is a source of solace for a lot of individuals. As much as trolls may try to tear other people down, many communities and movements thrive on this social media site. Finding users who discuss fat positivity on Twitter openly, honestly, and without shying away from the nitty gritty has been a huge comfort and aid to my own self-love journey and even my mental health. But there are 11 tweets in particular that sum up much of what it means to be a fat person this day in age.

The body positive community on Twitter and, more specifically, the fat and plus size users who I follow on the social media site, make sure to discuss and debate the intricacies of the movement and even tear apart the flaws of its mainstream utilization. Through them, no activist message is diluted, even if they're all limited to 140 characters. The sense of community is that strong.

Thanks to this platform and community alike, I've found myself empathizing and feeling moved regarding aspects of the fat experience I had never considered before, despite being plus size myself. I've also grown to embrace the experiences I have as a fat person that I previously never felt comfortable admitting to, even to myself.

The following collection of tweets encompasses a vast amount of subjects and microaggressions — as well as fully-fledged aggressions — that fat people often have to deal with on the daily.

It's no secret that the meaning of body positivity as an activist endeavor has been diluted because of its buzzword status as well as the phrase arguably being co-opted by large corporations.

What is more frustrating above all else, however, is seeing folks who self-identify with the term and then go on to fat shame or body shame other individuals regardless. Please don't use our language if you don't subscribe to its ideals.

I don't believe that kids are born hating. Repeat after me: Kids are not born hating. Seeing such acts of aggression and discrimination on the daily, and particularly when coming from young people, breaks my heart. But it's proof that adults very regularly teach their little ones to be intolerant and cruel.

Making sure to include one plus size or curve model in a brand campaign does not mean you are achieving diversity. Instead, it can feel like brands are filling a quota, rather than actually caring about representation.

By merely existing as a fat person on the internet — and especially if you are a fat person who actively and positively discusses being fat — the trolls come out in full force. It's an act of aggression even in a space where so many of us try our hardest to love ourselves and promote love for others.

Nerd About Town blogger Stephanie Yeboah summed up the double-edged sword that plus size people so often have to deal with when looking for love. We are regularly told that we will never find it, but then chastised, belittled, or doubted when we do.

Just once, I'd like to tell an otherwise well-meaning person IRL that I'm fat and not have them try to deny my fat's existence. I am not a mermaid because my thighs touch. I am not a tiger because I have stretch marks. I am not "a little curvy." I'm simply a person who is fat.

Although I'm not discouraging these kinds of metaphors if they help people, it's important to note that avoiding the word "fat" like the plague only perpetuates the notion that it is a purely negative descriptor.

Not only can it be frustrating to see brands use "body positivity" to boost sales, but it's upsetting to see that the models they use so often look nothing like the everyday plus size human. This might partially be because all of their perceived "imperfections" (like rolls and cellulite) are airbrushed out. But mainly, I'm willing to say that it's because the models simply aren't representative of the real fat customers buying the merchandise being sold, or the plus size community in general.

I would never say that saying skinny shaming doesn't exist. It definitely does. But skinny shaming is not rooted in a societal and media hatred of a body type. Even if a person is skinny shamed, they can usually still go to the beach in a bikini and not have people actively hate them for existing. Thin privilege exists and, IMO, it needs to be recognized more often.

This tweet cuts close to home for its brutal honesty: When you're a plus size person, especially if you grew up fat, conceptualizing yourself as an outsider is often a reality.

Every birthday, I always think about how a younger me would have thought I'd be thin "by now." Even though I'm comfortable with my size, I can never forget the deep loathing I had towards myself throughout all those years simply for being bigger.

All too often, movements like body positivity and feminism (once they hit the mainstream) are fronted by white women. This is wrong, this is unfair, and this alienates people. More often than not, a marginalized group is made up of a majority that has been marginalized in different ways.

Both in public and otherwise, people's relationships with food as plus size individuals will always be overanalyzed. So much so that many fat people refuse to eat in public out of fear of being shamed.

This tweet reminds me of a scene in the British sitcom My Mad Fat Diary , in which the main character Rae comments on eating in public as a fattie: "I just can't eat in front of people. If I eat unhealthy food, then people will think, 'Oh, look at that fat cow. No wonder she got to that size.' And if I eat healthy food, then they'll think, 'Who're you trying to kid, love? You didn't get to that size by eating salads."

These tweets are only a sample of what the fat positive community discusses on Twitter, but they're a great representation of the struggles so many of us face day to day simply for existing while being fat. Although we're far from being socially rid of these kinds of problems, I'm glad that at least we have a forum on which to discuss and debate the issues.