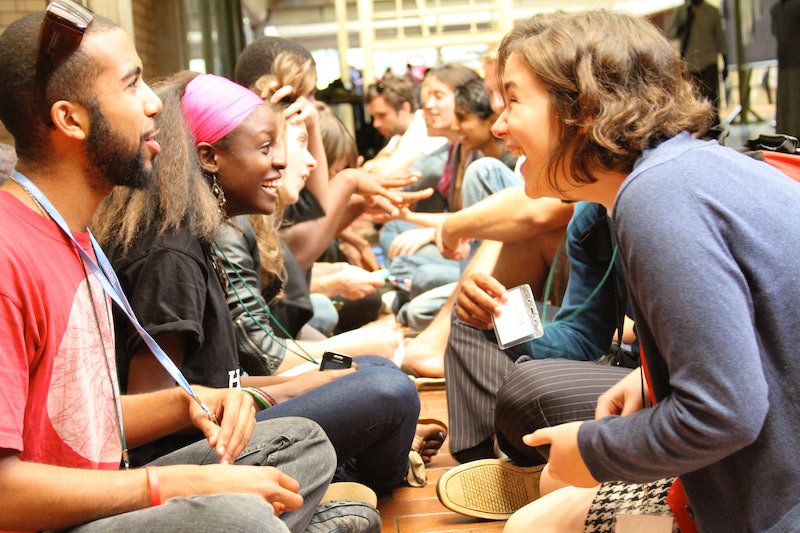 Love at first sight? Normally, when you go on a date and no one says anything all night, it's a bad thing. And really awkward. But silent dating is actually a thing that people do voluntarily. The Daily Mail's Lucy Cavendish investigated the silent speed dating events Shhh Dating regularly organizes across London.

Shhh Dating is founded on the belief that "we are instinctively better at communicating and choosing the right partners when we have the chance to put aside words and see each other as we really are," their website explains. For two hours, participants meet members of the opposite sex without saying a word. Instead, they rely on hand gestures and, um, sounds.

Lucy Baker, the organizer, makes everyone start the evening by jumping in the air and shouting "Oogly-boogly-oo!" Yes, really. Apparently this relieves tensions and makes everyone feel less awkward about using sounds to make conversation.

Each mini-date involves two one-minute components. In the first half, couples gesticulate away to try and get to know each other. Then, for the remaining 60 seconds, couples just stare into each others' eyes. Because eyes are windows into the soul and whatnot.

"I can't help but make snap judgments based on their appearances — too short, too beardy, too bald — but no doubt they are doing the same about us," writes Cavendish. Seems like the whole connecting-more-deeply-in-silence thing actually goes the other way around.

I'm all for getting creative, but talking is such a huge part of choosing a partner. Silent speed dating does prove an important point: Straining to decipher gestures and sounds will make anyone a better listener. Paying attention to your date, whether you talk or not, is what this is all about. But still, what if your speed dating match turns out to have a weird squeaky voice? I'll stick to talking men, thank you very much.