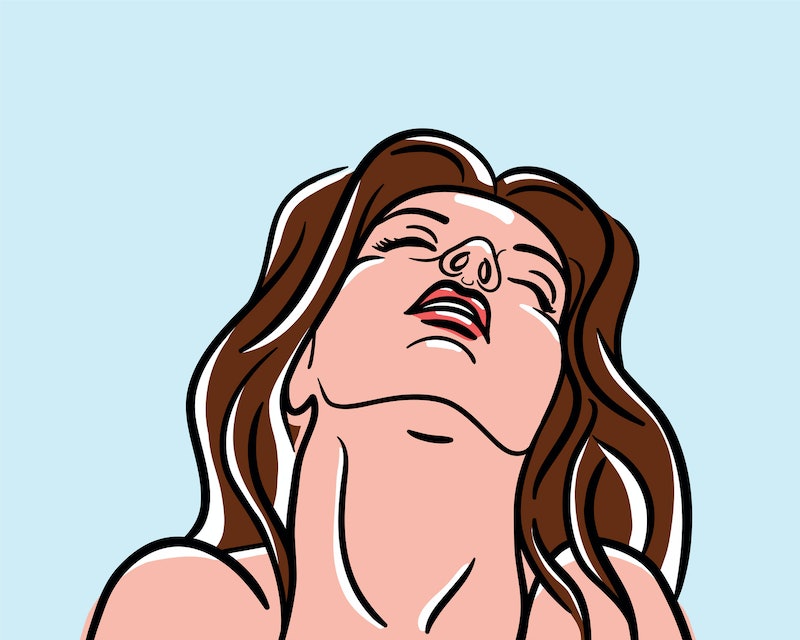 A disclaimer for my boyfriend, who is by no means off the hook: I enjoy quality, thorough oral sex. It's a pretty good time. But I've never been sold on the idea of cunnilingus (I know, that word, ugh, but would you really rather I use heinous euphemisms? This is a no "muff-diving" zone) as the be-all end-all magical orgasm generator that, say, American Pie cracked it up to be. But after years of playing Would You Rather, I can confidently say that, if push came to shove, I would give up oral for cheese. It doesn't take a half-hour of wriggling around, offering directions like a damn Garmin, "I'm thisclose — nope, shit, lost it," and reminding myself to RELAX and just ENJOY IT ALREADY to eke satisfaction out of a wedge of Brie.

Because I still like oral, and have no desire to delete it from my boudoir repertoire, this isn't really something I've ever felt the need to voice or qualify to anyone. I don't know...it's just supposed to be, like, the greatest thing ever. And while oral's a pretty safe bet for me, orgasmically speaking, it's also not necessarily my favorite way to reach nirvana, and it's definitely not the fastest.

I can confidently say that, if push came to shove, I would give up oral for cheese.

So when a friend texted one of my group chats last week, announcing that she'd just had her first-ever orgasm from someone going down on her, I sat back and waited to read everyone else's reactions before weighing in. There was a bit of, "Are you crazy?! I always do," and also some, "Actually, I almost never let guys go down on me." Even allowing for the fact that some guys and girls have better tongue game than others, I was still pleasantly surprised to learn that I was far from alone in not feeling oh yeah-yeah-yeah-YES enthusiastic about oral sex.

For The Janus Report on Sexual Behavior in 1993 — the first comprehensive sex study since Masters and Johnson, aka Masters of Sex, in the '60s — a mere 18 percent of women surveyed voiced a preference for oral sex to achieve orgasm. Years later, a much smaller 2012 study displayed a possible change in attitude over time to oral (though, 43 college women is hardly a broad survey), with about 75 percent of subjects expressing positive views of oral sex as an effective means of giving pleasure or gaining an orgasm. Those who had "ill feelings" toward oral sex, according to the Center for Sexual Pleasure and Health,

described it as “gross” but could not give sufficient reasons why, though the researchers noted a perceived uncomfortableness with their bodies from these participants. For example, some respondents would say having someone’s face “down there” was “strange.” Others noted that their partners favored females being shaved, which could have led to additional stresses or worries from some.

There's a lot going on here — I mean, I tend to be critical of sex studies in general, but it's all a bit dubious to you, too, right? I'd like to know how the researchers gauged "uncomfortableness with their bodies" for that last one, for instance (referring to the genital area as "down there" doesn't convey serious discomfort to me).

We're missing a few things, too, like statistics on queer sex, or a solid figure lending insight into how frequently women actually orgasm during or as a result of oral sex. I'd also like to read approximately one thousand doctoral dissertations on le petit mort as trophy and how we allow an experience that often marks the end of a sexual experience to rewrite and define the levels of pleasure that preceded it.

I'd also like to read approximately one thousand doctoral dissertations on le petit mort as trophy and how we allow an experience that often marks the end of a sexual experience to rewrite and define the levels of pleasure that preceded it.

I don't know about you, but for me, while a nice, fat percentage can occasionally make me feel less alone, I've always found anecdotal evidence to be much more useful. Well, here we go: I feel pretty okay about oral sex, but I'm not gaga over it or anything... Maybe like a 7.5/10. Salon editor Sarah Heppola is whatever about it. I just polled a bunch of my friends, and they land about half and half on the issue. (Even among those of my pals who love it, many of them don't come during.) Cosmo knows it's hard to enjoy oral; that's why they ran this how-to guide. Dudes I've dated — dudes who articulated themselves excellently, if you know what I mean — have told me about the girls they've dated who weren't that into it. Finally, let's dismiss the notion that cunnilingus is a necessary part of lesbian sex; as Lindsay King-Miller at Cosmo points out, it's not, because, hey, not all women enjoy it.

And if you don't either? You're in good company, and you shouldn't feel a lick of shame over it.