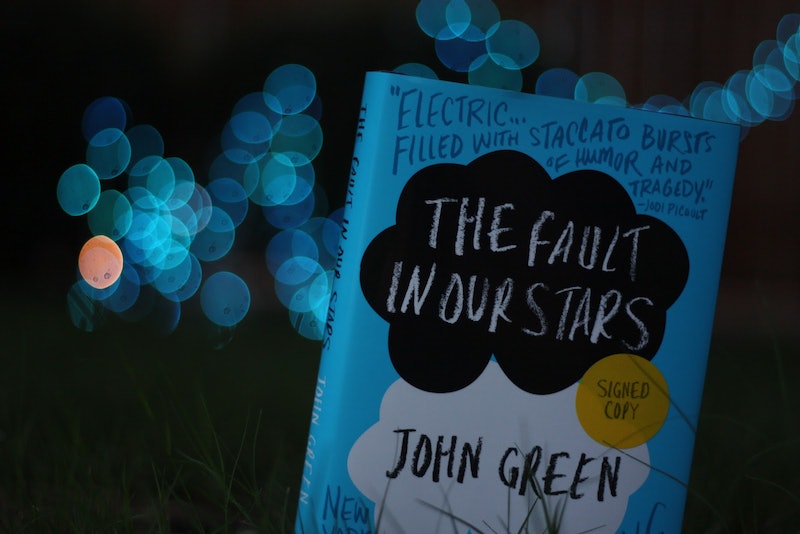 Even though we're smack in the middle of Banned Books Week, a California middle school district has banned John Green's beloved The Fault in Our Stars following complaints from parents about inappropriate sexual content. I know what you're thinking: There are still middle schoolers (nevermind parents) in this world who haven't yet read The Fault in Our Stars? Isn't this two years and a movie too late?

Apparently not. For those of you hiding your head in the sand this year, Green's YA novel centers on two teenagers who meet in a cancer support group and fall in love. And as the Riverside schools parents' have now spoiled for you, they have sex. It's important to note that this sexual content takes up approximately 1.5 pages of the 318 pages, and the word "sex" is not even in the book. And if we're being nitpicky, the book doesn't so much have teens "having sex," as one mother says, but teens right before and after having sex.

Krueger said she didn’t want to “come off as a prude” or block anyone’s freedom to read. But she questioned whether the book should be available at the middle school library because the subject matter involves teens dying of cancer who use crude language and have sex.

Frankly, parent, you are blocking the freedom to read by removing it from libraries rather than just from your child. Again, we should all be tired of making the statement that by writing this book off as being about "teens dying of cancer who use crude language and have sex," but apparently we need to keep saying it. By dismissing a book that has a lot to say to middle school and high schoolers as being just about this, you are robbing children of the chance to experience so much more that the book can teach us.

1. Everyone you meet is fighting their own battles

The weird thing about houses is that they almost always look like nothing is happening inside of them, even though they contain most of our lives. I wondered if that was sort of the point of architecture.

At even its simplest, The Fault In Our Stars can be a wake-up call to some preteens — and, of course, adults as well — that you never quite know the struggles the people around you are going through. Don't be cruel. Maybe seeing a girl your age with a nasal cannula, a boy with a prosthetic leg, or a blind boy behind sunglasses after this book will cause people to look at them with empathy, instead of as "other." Maybe they'll choose to be kind, to befriend, rather than to push aside or worse, bully.

2. It's OK to feel your feelings

And only now that I loved a grenade did I understand the foolishness of trying to save others from my own impending fragmentation.

Hazel spends so much of her live in a self-imposed bubble, pretending everything is fine to protect those around her. But this is the wrong idea, and she learns it. Your friends and family are put here to help you, so engage with them. Speak your fears, as Augustus does, and cry it out, egg cars, and break things, as Isaac does. You don't always have to put up a facade; let others in to help when you're going through something.

That’s the thing about pain – it demands to be felt.

3. You are not defined by your illness

"So what's your story?" he asked, sitting down next to me at a safe distance."I already told you my story. I was diagnosed when—""No, not your cancer story. Your story. Interests, hobbies, passions, weird fetishes, etcetera."

Words can't explain how much I wish I had this book when I was a preteen, coping with my own illness. For others who are struggling with the same diagnosis or congenital disease, it can truly teach us all to remember that, while an illness becomes a piece of who you are, it does not define you. And you know what? You can do this.

Grief does not change you, Hazel. It reveals you.

And for those who are lucky enough to have a healthy childhood, the novel can teach you to remember to never pigeonhole people, to allow them to open up and show you their whole person, behind the disease.

4. You can't always get what you want

Apparently the world is not a wish-granting factory.

How many times have you heard, "but it's not fair!" from someone in your life? The Fault in our Stars doesn't put it gently: Guess what, the world isn't fair. If you're playing along thinking it'll be fair, you have the wrong scorecard. But there's still hope — and that's a crucial message, one that isn't all positive or all negative, of the story that really, we shouldn't let our middle schoolers miss. And if you think some of them aren't already learning this in the course of their own lives and you're helping them by shutting out the negativity, you're so, so wrong.

5. Things will never work out how you imagine, and that's OK

"I'm sorry. I wish it was like that movie, with the Persians and the Spartans."Me too," he said."But it isn't," I said."I know," he said."There are no bad guys.""Yeah.""Even cancer isn't a bad guy really: Cancer just wants to be alive."

Every step of the way, Augustus and Hazel's plans were foiled. Their trip to Amsterdam to meet their favorite author; the rollercoasters of their illnesses; and even Isaac dealt with it with his breakup. But ultimately, this isn't always a bad thing, and it's a tough lesson to learn for everyone. No matter how much you plan ahead, the universe doesn't have a copy of your calendar.

There are so many people in this world that it is almost impossible to touch all, even to touch half. She encourages us to ignore the inevitability of oblivion for it will come no matter what. Each one of you is important and whether you make an impact on one person or one thousand people, you will make a difference. You are important, don’t you forget that. It’s okay to be loved deeply instead of widely. Some people would even argue that it’s better.

(Excuse me while I grab my tissues.)

What could be a better lesson than reminding the middle schoolers that their actions and words impact people's lives, for better or for worse. It's a not-so-gentle nudge to remind people to look outside themselves, to be kind to friends, to treat others as they'd want to be treated. As Hazel said, and as Gus learned, you don't have to be world famous, the best kind of love is to be a good person and a good friend. And in the end, that's what will make the difference.

"But I will say this: When the scientists of the future show up at my house with robot eyes and they tell me to try them on, I will tell the scientists to screw off, because I do not want to see a world without him."

“I was blind and heart broken and didn't want to do anything and Gus burst into my room and shouted, "I have wonderful news!" And I was like, "I don't really want to hear wonderful news right now," and Gus said, "This is wonderful news you want to hear," and I asked him, "Fine, what is it?" and he said, "You are going to live a good and long life filled with great and terrible moments that you cannot even imagine yet!”

The Fault in our Stars is a huge reminder that, even when you're a teenager, you are not immortal. With that in mind, get out there in the world and experience it. Travel, feel, love. Appreciate the small moments. Don't get bogged down in the minutia, because it won't matter next year, or even tomorrow. Don't be afraid of heartbreak or struggle, because look, that's inevitable and a part of life. You never know what the world has coming for you, so go out and make things happen.