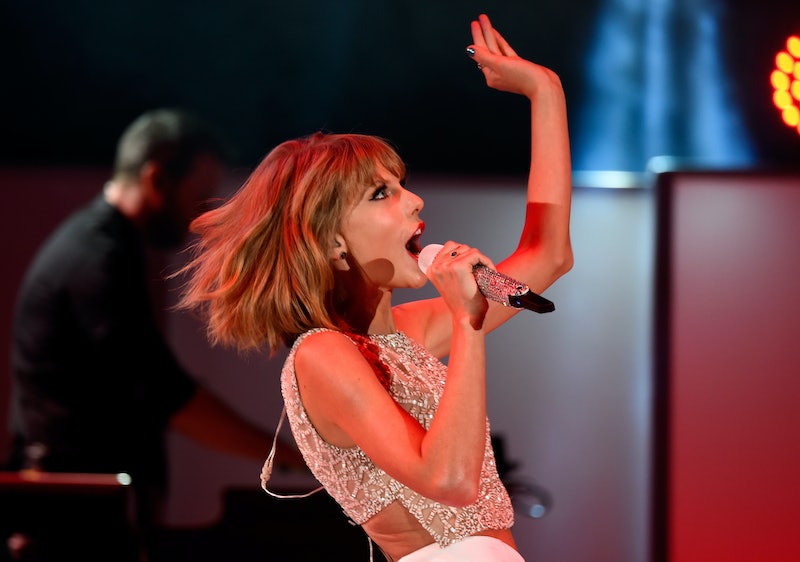 Taylor's really been rolling the red carpet out for herself lately (if wearing multiple Elie Saab gowns, an Oscar de la Renta party frock, Miu Miu brocade pumps, Naeem Khan beachwear, and much more over the course of a sub-four minute music video isn't rolling out the red carpet, I don't know what is) — she's definitely made a concerted effort on the fashion front as she's stepped up the promotion for 1989. I've long been a fan of her style (especially her summer digs and her woodland fairy-esque glitterbomb numbers), and now she's taking things up to a whole new level!

There are a lot of factors here — there's 1989, and the new, grown-up image she's trying to project with along it, there's her shift out of country pop to pop-pop, there's her New York City ambassadorship (and the corresponding wintry style that LA Taylor never got to try) — but whatever the underlying cause(s) may be, there's no denying that she looks pretty darn awesome. I mean, the Calvin Klein crop top/pencil skirt combo she wore with red suede pointed pumps on Good Morning America? Just the tip of the iceberg. So, with that in mind, let's take a look at some of her best recent looks:

In A Pork Pie Hat and a Plaid Coat

All of my favorite things at once!

More of my favorite things!

In a Crop-Top Horse Sweater

There's a lot going on here, but in all honesty? She had me at suspenders.

In A Bodycon Calvin Klein Ensemble

She's queen of the crop tops.

In a Polka Dotted Dress

In a rainbow, metallic pleated skirt

I kind of went crazy for this look, and may or may not have spent a couple hours scouring the internet for a dupe.

In a Bodycon Minidress

More like this
Everything To Know About Taylor Swift’s 10th Studio Album, 'Midnights'
By Grace Wehniainen and Jake Viswanath
Taylor Swift’s Latest ‘Midnights’ Look Went Heavy On The Glitz
By Allie Fasanella
There's A Taylor Swift Easter Egg In Ryan Reynolds' 'Deadpool 3' Teaser
By Marina Watts
The Best Of London Fashion Week 2022 Street Style
By Allie Fasanella
Get Even More From Bustle — Sign Up For The Newsletter