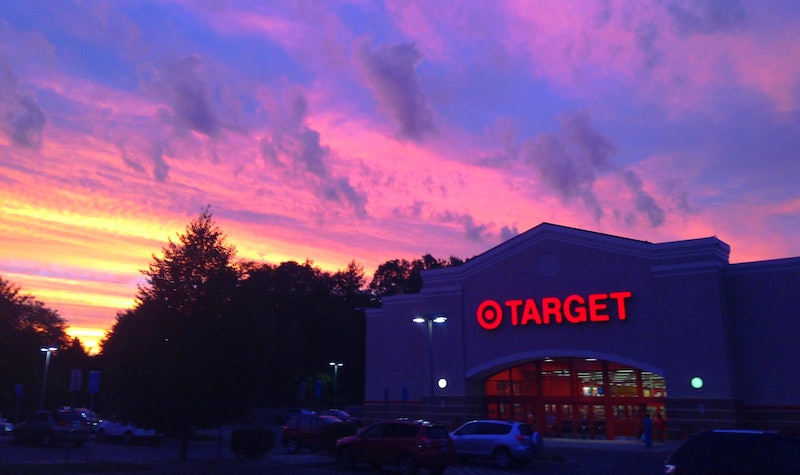 The past 10 days or so have been a bit crazy in the world of plus-size fashion. Between the scandal over Myla Dalbesio's Calvin Klein campaign and her categorization as a plus-size model at only a size 10, on top of the news that Old Navy is (yet again) charging extra for women's plus-size clothing than it is for men's plus-size clothing, things have been rather... heated. Now, there's a new Change.org petition asking for plus-size equality at Target.

According to Old Navy's owner, Gap Inc., the markup mentioned previous is a reflection of the "selection of unique fabrics and elements" used in their plus items — items that are supposedly "curve-enhancing and curve-flattering," (though last time I checked, that wasn't remotely true). Despite that this "cost" excuse is one used time and time again by retailers who charge extra for larger garments, the bizarre thing remains that the plus-size men's garments are sold at lower prices (something they rationalize by explaining that men's garments don't require the same nice materials that women's fashion does). Basically, it's all a bit screwed up. And over 16,000 people have signed a Change.org petition against Gap Inc. to try to seek fairer pricing. But Old Navy is far from the only retailer to show visible discrimination when it comes to plus-size women's fashion: Target is right by its side. And Indianapolis-based Lynette Rowland is taking a stand.

By this morning, Rowland's Change.org petition against Target has 750 signatures. Whilst I would argue that Target's plus-size fashion is far more fashionable than Old Navy's, the fact remains that the retailer has isolated its plus-size fashion and maternity fashion to one small corner of its large department stores. Not only are both categories void of the variety seen in straight-size fashion, but they're also mixed in together, as though plus-size clothing and maternity clothing were interchangeable. As though being pregnant and being plus-size are both negative things, unworthy of options or pizazz.

Target has gotten into trouble in the past for its treatment of both plus-size women, and honestly, of all women. Their use of "Manatee Grey" as the name for a plus-size dress whose straight-size twin was just "Heather Grey" is an unforgettable moment. And let's not forget when they used Photoshop to eliminate their models crotches. It's a tricky situation. We all want to love Target for its [almost] bargain prices and for being a more fashionable alternative to Walmart or Kmart, but they just get it so wrong, so often.

Within her petition to Target, Rowland brought up a few qualms:

It's all a bit weird when you really think about it. In a time when we know that the average American woman wears a size 14, the fact that SO many retailers still refuse to adequately cater to anything over a 12 remains perplexing and somewhat illogical. If you ask me, it all goes back to fat phobia. Just because there are more fat people today than there were in the 90s doesn't mean there's more acceptance. But what about maternity clothing? Last time I checked, there's no big stigma against pregnant women, and yet, Target still isn't giving them better options, either.

Sometimes I wonder if anyone who deviates from the idealized size 6 is fated to poorer clothing options, no matter what. Other times I attribute the disparity to retailers wanting to preserve some kind of weight-normative "image." But the thing is, Target's "image" has always been about providing affordable fashion to all people. And the reality of it — the reality in which plus-size women and pregnant women get limited to all of 15 clothing items as opposed to the hundreds of things straight-size women get to choose from — just doesn't match that image at all.