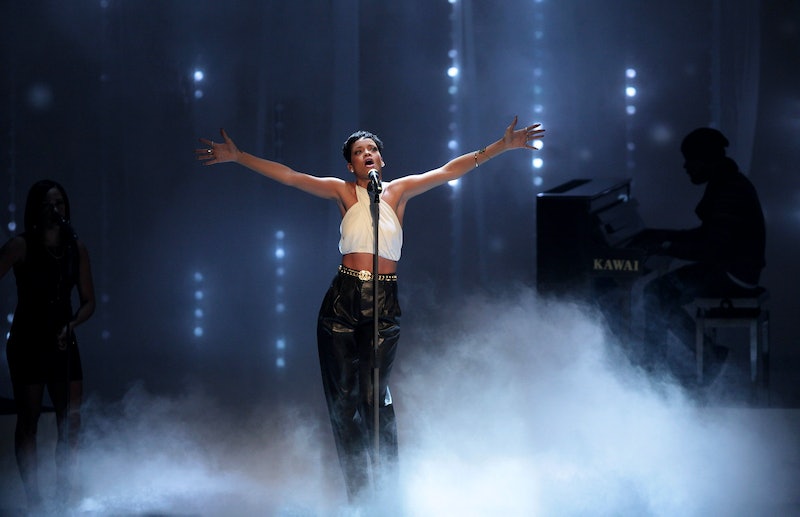 The Millennium has given the world countless sartorial blessings, but none is comparable to thrill of a trend-setting celebrity uniting with a major fashion house. Rihanna happens to be one such fashionably-minded celebrity, and her latest offering is the stuff of outré daydreams. Rihanna's Balmain Pierre tote is starring in its own, glamorous video series, and the result is trend-setting mayhem.

The chanteuse and fashion house already possess a history of creative collaboration, as Rihanna vogued for Balmain's Spring/Summer 2014 campaign along with Iman and Naomi Campbell. However, the Pierre tote video series marks the first case of Rihanna's accessories garnering more attention for a film than the singer herself. And at a swoon-inducing price of $4,875, this piece of art deserves the spotlight.

Armed with the hashtag "Enroll #BalmainArmy," the series depicts the Pierre bag in various states of battle: as the anchor to a bomb, perched amongst tropical palm fronds as a camouflaged hand slowly reaches for it, and perched atop an army-grade parachute with military radio communication and helicopter din in the background. Bearing in mind Balmain Creative Director Olivier Rousteing's emphasis on the brand's military-chic edge, the ad campaign feels right at home in Balmain's wheelhouse. As for RiRi, one wonders if the singer's next music video will feature a military infusion. After all, her Pierre bag's film debut has given Rihanna quite a bit to live up to.