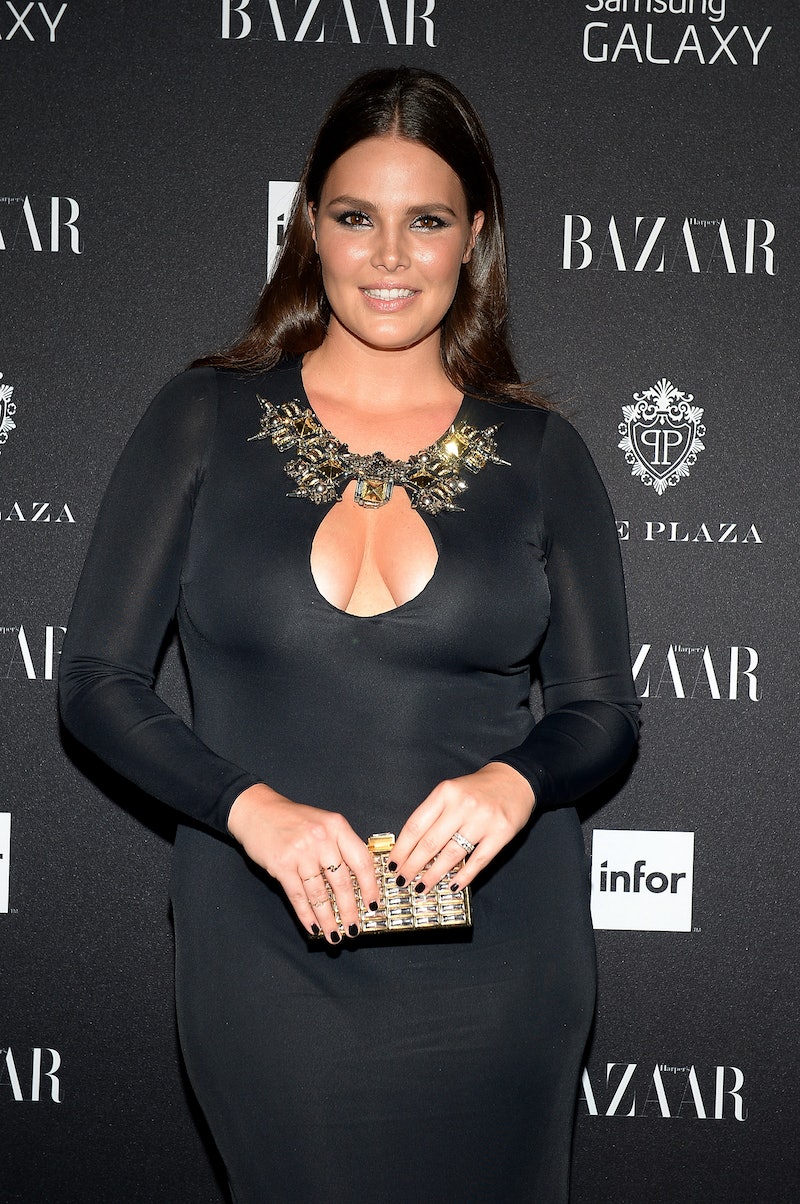 The annual Pirelli Calendar's preview pictures were released on Monday, and amongst them — as Miss April, to be precise — is Candice Huffine, one of the world's highest-paid plus-size models. The ensuing media frenzy, which began when Huffine's involvement with the calendar was announced, has been mostly positive. Pirelli's calendar is a yearly collection of the world's hottest models in states of undress, and the media has loved the fact that this is Pirelli's first plus-size picture (aside from Sophie Dahl, but that's conveniently been forgotten). It's claimed that this means more acceptance for women's "real" bodies among the angular, airbrushed fantasies of normal fashion imagery.

To which I say: Not so fast. Huffine's victory is a big step forward in some ways, but in others it hasn't changed a thing — and some media outlets haven't been so kind to the emergence of a plus-size female body nude on the news stands.

Don't get me wrong, the positives here are significant. Tire company Pirelli's calendar has been going since 1964, and while it's taken a stupidly long time to introduce a plus-size figure, it's also a hugely public statement of positivity about the sexiness and sensual acceptance of non-00 sized bodies. The Pirelli Calendar isn't so much a changer of the zeitgeist as it is an expression of it; a few years ago it featured (vaguely disgusting) Terry Richardson pictures, but in recent years, the focus has shifted in line with the public's likes and dislikes. The past few calendars have had a philanthropic slant — 2014's was shot by noted war photographer Steve McCurry and featured models known for their charity work, while 2013 focussed on endangered wildlife.

Let's not get this twisted: Nudity is amazing, and the picture is hot. The overall problem, however, is that plus-size models in fashion are often restricted to lingerie. They simply aren't being given clothes because of the implicit belief that clothes will only look good on the thin.

So this choice to feature a plus-size model by Pirelli's stylist Carine Roitfeld and photographer Steven Meisel, both very established and respected fashion tastemakers, is a powerful one. However, it also feels slightly tokenistic. The gimmick for last year's calendar was philanthropy and a "serious" photographer; for this year, it's a plus-size model. Will the commitment last, or will Pirelli return to its regularly scheduled programming for 2016? Will companies ever just refer to plus-size models as simply "models," rather than using them as symbols of progressiveness?

Of interest elsewhere is the media's reaction, particularly in the established fashion media. British Vogue's website chose to put together a slideshow of every NSFW photo, January to December, from the Pirelli Calendar — except for April, Huffine's month. All the photographs are a similar level of nakedness — Huffine's, in a latex topless bustier, is actually slightly more covered than some of the others. The only difference is her body size. The Vogue team's decision seems to have been either oversight or squeamishness; the plus-size female body just didn't make the cut. (British Vogue did not respond to Bustle's request for comment on their editorial decision.)

Many sites previewing the calendar, from Glamour to Fashionista, also took the non-Huffine route, focusing instead on less nude behind-the-scenes photographs of Huffine covered in a dressing gown. If you wanted to find the original NSFW Huffine picture, you had to go to CR Fashion Book, Pirelli stylist Carine Roitfeld's own magazine.

Fortunately, this wasn't a universal attitude. Harper's Bazaar's website and Style.com both published the calendar in full. GQ did too, but it openly stated that it had to source the Huffine image from CR Fashion Book instead of Vogue.

Is this a weird double standard about pornographic NSFW boundaries? Are pert bottoms in latex G-strings (this year's Pirelli cover, not just a random example) acceptable for Vogue readers, but hugely bountiful breasts too confronting because they're too sexual? Is plus-size reality simply too adult against the gamine, small-breasted thinner models? Is it a coincidence that Keira Knightley was lauded as brave this month for her decision to go full frontal without Photoshop, while Kim Kardashian was mostly slut shamed? I think not.

More widely, Huffine's success doesn't do as much for plus-size body presentation in fashion as is being touted, purely because Huffine is partially nude. Let's not get this twisted: Nudity is amazing, and the picture is hot. The overall problem, however, is that plus-size models in fashion are often restricted to lingerie. They simply aren't being given clothes because of the implicit belief that clothes will only look good on the thin.

It's an unfortunately common belief. Earlier this year, New Zealand designer Denise L'Estrange-Corbet caused a firestorm by saying on live television that "clothes look better on skinny people. They just do." The plus-size modeling industry is largely centered on lingerie, with even the controversies — like Calvin Klein's new model, Myla Dalbesio, accused of not being "sufficiently plus-size" at a size 10 — confined to underwear.

Look at Huffine's own career: The groundbreaking cover of Vogue Italia, with a collection of other plus-sizers, all wearing lingerie; a series of editorials, all focusing on nakedness, one (in W Magazine, above) wearing only pearls. The latest issue of American Vogue contains an editorial starring Huffine, Tara Lynn, and other plus-size major models (top image), wearing — you guessed it — lingerie. I'd never wear clothes if I looked like that either, but the implication is problematic.

Plus-size bodies are fine, this choice says, but only if they're of a certain type. Various body acceptance advocates like the Militant Baker have commented that popular plus-size models, including Huffine, actually only fit one shape: hourglass, with small waists and large hips and breasts. Apple shapes, and indeed any other shape at all, are still entirely absent. The confining of "big is beautiful" to one particular body type doesn't do much to help diversity in fashion.

The fact that plus-sizers are becoming the faces of actual clothing companies, like Robyn Lawley for Ralph Lauren, is more revolutionary than Huffine's Pirelli shoot, because of the prejudice against non-sample size women actually being able to look good in clothes. While body acceptance in major media is a step forward, fashion imagery is ultimately about selling clothing and excluding plus-size women from that core goal continues to marginalize them.

So the picture of Huffine is only exciting up to a certain point. If Pirelli starts featuring multiple plus-size models, Vogue starts publishing pictures of both nude and clothed plus-size ladies, and plus-size models start being given high-fashion campaigns on a regular basis, then I'll start making banners that say BATTLE WON. Until then, I'm only cautiously optimistic.